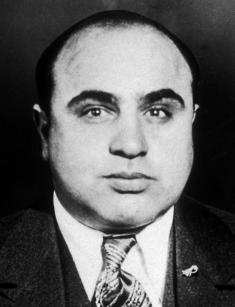 People are mainly interested in historical persons who could be an example to follow or created something useful for their country or for art, science or the future. However, there are some people who became famous not for creating something but for their crimes, but they are still interesting to the public.

Alphonse Gabriel Capone, usually called Al Capone, is considered to be one of the most famous criminals in the history of humanity. Let's see what this gangster is renowned for.

Al Capone proved to be one of the co-founders of the organized crime in the USA in times of the Prohibition era and Great Depression, who created the system of money laundering and such a thing as racketing. But the name of Al Capone went down to history after the notorious series of crimes, later called Saint Valentine's Day Massacre. Biography of al Capone is directly connected with his ancestors, or rather with the Italian roots. That was Italy where Gabriel and Teresa Capone emigrated from and settled in the New York suburb of Williamsburg. And that was an Italian mafia their son will be associated with for all his life.

Alphonse was born in the last year of the 19th century and was the first of nine children of the Capone family. From an early age, he demonstrated his sharply violent nature. Nowadays, the boy would have been among the psychiatrist’s patients even before he went to school and probably would not have got into the criminal sphere. But in the years of Al Capone’s childhood, no one cared about such things. Therefore, Alphonse’s aggression followed him all the time. From the first year of school he was loudly and violently arguing with classmates and teachers, and in the sixth year, he even tried to batter his teacher right in the classroom. Soon after that, the teenager quitting school and joins a local gang, which would later become a part of the famous New York gang called "Five Points".

Young people were mainly engaged in extortion and illegal gambling. To cover this kind of occupation, Al Capone was moonlighting as a bouncer in the club Harvard Inn, and also worked as a professional player in the pool. Al Capone wasn't tall, only 5'7'', but it was always very big-bodied and made an impression of being bully. By the way, that was the poolroom where he got into a fight, where Al Capone got a scar on his face. He made an unambiguous comment to one of the girls, and she was either a sister or the wife of a criminal, who was also present in the hall.

As a result, the stabbing began, and Alphonse got his famous scar on the cheek. Curiously, the future boss of the mafia had always been ashamed of such a common history, so he made up an alternative version of what had happened: he got the scar as a result of participation in heroic battles during the First World War. But in fact, Capone not only didn’t participate in battles, but he also didn't serve in the army at all. By the age of 18, Alphonse Capone was suspected by the city police of many crimes, including two murders. Therefore, the young man decided to look for happiness in another city and moved from New York to Chicago.

Having moved to the new place, “Great Al”, as friends called him, engaged in pimping in one of the provincial brothels. In 30-es, it was considered almost the most abusive occupation among the bandits of Chicago, but Capone managed to make from a poor place incredibly profitable business. He turned it from an ordinary brothel into a four-story bar "the Four Deuces", where the floor was located pub, tote, casino and the brothel itself. Initially, a cheap hot spot very quickly turned into an enterprise that gives 35 million dollars a year. In the transfer to today's money, it will be about 420 million per annum.

So, it is not surprising that by the age of 26, Al Capone became the owner of the entire criminal Empire, which he inherited from the previous boss of the mafia, John Torrio, also called "The Fox" or "The Pope Johnny". The first thing the new criminal authority introduced was such a previously unknown concept as racketeering. He offered honest entrepreneurs to pay him a bribe, and a considerable one, and for that, he provided them with protection from other gangs, and sometimes from the police.

If businessmen refused, their institution, and often themselves, threatened with death. The mafia also began to exploit prostitution, introduced a fraudulent scheme, many years later called "money laundering", "bought" the police and even high-ranking politicians with bribes, which was previously impossible to imagine. By the way, the invention of the "money laundering" scheme is also attributed to Alphonse Capone.

The fact that his business was directly related to the smuggling of alcoholic beverages, which were banned in the United States in those years. The profit had to be legalized, and the mafia opened a network of laundries to do this. Prices for services were set so low that it was impossible to calculate the number of customers. Officially, laundries showed a huge profit obtained from the sale of alcohol. Actually, because of its connection with laundry, the scheme was called "money laundering". However, this term was first used only decades after Al Capone’s death.

The main distinguishing feature of Al Capone’s mafia was a non-stop criminal showdown, which usually ended with the death of someone among the bandits. During the first five years of "directory," Capone more than half a thousand not ordinary gangsters were killed in the shootings. Alphonse destroyed the bandit groups of Irish, Russian and Mexican in Chicago, getting rid of the competition. It was his idea to replace the usual guns for Italian gangsters with automatic rifles, and then with machine rifles.

Moreover, he approved to use explosive devices connected to the starter of the car which destroyed the car with the driver and passengers after ignition inclusion entered the course. A series of murders committed by gangsters received a well-known name “Saint Valentine's Day Massacre". It began on February 14, 1929, in the garage, where one of the gangs kept a warehouse of whiskey. Capone's armed men in police uniform broke into the garage. The competitors, who decided they were victims of justice, meekly lined up at the wall for arrest but were shot on the spot.

Such shocking murders were repeated several more times. There was no direct evidence found that Capone was connected to these episodes, so he, like all his people, escaped the punishment. The police didn't punish anyone for those mass executions, which proved once again how significant was Al Capone’s impact on law enforcement. However, “Saint Valentine's Day Massacre” was the reason why Alphonse began to be closely monitored by the representatives of the Federal Bureau of Investigation. FBI agents didn’t see the opportunity to arrest him for banditry, yet found another clue which would help them to catch one of the most legendary gangsters of the XX century, and so they appealed to the Internal Revenue Service.

Since adolescence, revolving in criminal circles, Al Capone's personal life was connected with prostitutes. By the age of 16, the young man had several venereal diseases, including syphilis, which he tried to treat, but soon forgot about this. Later, such a disregard for health would affect Al Capone’s. Alphonse married at the age of 19. Al Capone's wife, an Irish saleswoman and an ardent Catholic, May Josephine Coughlin, gave birth to his only son, Albert Francis, who was called Sonny in the family, a month before the wedding.

Curiously, Alphonse’s father, Gabriel, wrote permission to the official service, because Capone was under the age of 21 and couldn’t get married without the written consent of his parents. As for his son, Albert Francis Capone, he was significantly affected by his father's behavior in the youth. The boy was born with congenital syphilis and a severe complication on the brain. In infancy, he underwent a number of operations. Although the boy managed to survive, he was almost deaf.

It is noteworthy that only once in his life, Albert tried to feel like a criminal and stole some trinket in the store, but the police immediately arrested him. Capone Jr. was sentenced to two years probation, and he didn't break the law until the end of life. In adulthood, Albert changed his famous surname to Brown, got married and had four daughters. So, Alphonse Capone still has biological descendants.

As it was mentioned above, the police either couldn't or didn't want to catch the boss of the Italian mafia for criminal acts. As even the FBI could not prove the involvement of Capone into most crimes, authorities found another loophole. They accused Alphonse of failing to pay income tax. In the autumn of 1931, the mafia boss was sentenced to 11 years and a considerable fine. To make it so that Capone could not lead his subordinates from prison, he was placed in a correctional institution in Atlanta, and later in an isolated prison on the island of Alcatraz.

Alphonse Capone spent in prison only seven years out of eleven, but they were enough for Alphonse to undermine his health completely and be released, completely losing criminal influence.

In prison, his long-standing syphilis entered the final stage of body destruction, although the cause of Al Capone’s was different. At the end of January, he suffered a stroke. Three days later, doctors diagnosed pneumonia. On 25 January 1947, Alphonse died of cardiac arrest at his country house in Florida.

The mafia boss was buried in Chicago, but because of the enormous flow of tourists, which turned into a pilgrimage, his body was reburied in the cemetery of Mount Carmel in Illinois. In history, the name of Capone remained as the personification of organized crime but had a specific image of gangster romance, which is often used in cinema. Several dozens of famous actors, including legendary Hollywood stars Robert De Niro and Al Pacino, played the role of Al Capone in the films and television series.

The name of Al Capone is no less interesting for collectors. His weapons are even sold at auctions. For example, in January 2017, the Capone’s revolver "Smith & Wesson", 32-caliber, which the boss didn’t leave alone even during a game of golf, became the main highlight of American auction. 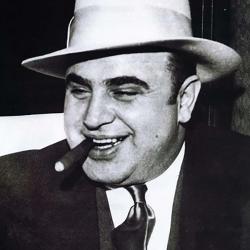