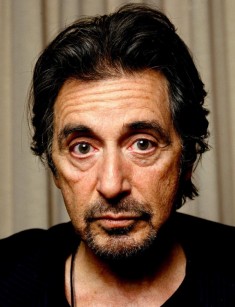 Al Pacino is an American theater and movie actor, director and scriptwriter. Alfredo (Al) Pacino was born in New York, in the East Harlem neighborhood of Manhattan. The parents of a future star – Rose and Salvatore Pacino were immigrants from Italy. When the boy turned 2 years old, his parents divorced. Alfredo left with his mother and they moved to The South Bronx to live with her parents.

The Hollywood star spent his childhood in the criminal neighborhood. Al Pacino wasn’t a well-behaved child, though previously he studied well at Performing Arts School. That’s why in his childhood he got a nickname "Actor". But Al was considered to be a hooligan, he started to smoke at the age of 9 and at 12 he already drank alcohol.

Also, he often started quarrels, fights, and disputes. Such behavior had consequences in his studies. In high school he couldn't pass any exams, that’s why when Pacino was 17 he was expelled from school.

Such turn of events led to a serious conflict with his mother and the young man had to leave his home. Al got a job of cleaner, later he worked as a delivery boy, waiter, postman. At the same time, he performed at the HB Studio amateur non-profit theater, where he got acquainted with Charlie Lawton, who taught the acting course.

In 1966 Al Pacino was enrolled in the professional acting studio. After getting the education the actor began his stage career.

An aspiring actor performed dramatic roles in the plays "Awake and Sing", "America, Hurrah", "The Indian Want the Bronx", "Richard III" and "Does a Tiger Wear a Necktie"? ". For his play in the latter performance, he received Tony Theatre Awards in 1969.

He repeated this success in 1977 in the play "The Basic Training of Pavlo Hummel". Even becoming a famous actor, Al Pacino didn't leave the theatre and acted in the plays "American Buffalo", "Salome", "Hughie", "Orphans" and took part in the performance "The Merchant of Venice", which in 2010 earned more than a million dollars for a week.

Like other actors, Al Pacino began his career with episodic roles. The actor's name often even didn't appear in the titles. The first notable film was a tragic comedy "Me, Natalie". A more significant role was performed by Pacino in 1971 in the movie "The Panic in Needle Park". The character of a drug addict Bobby was represented by the actor in such a talented way that the director Francis Ford Coppola was really impressed and even didn’t consider other candidates for the role of Michael Corleone in the action movie "The Godfather". The movie was extremely successful and this picture is considered to be the best in the acting career of the actor. For his role in this movie, Al Pacino was nominated for Academic Awards for the first time.

Next year the movies "Scarecrow" and "Serpico" were released. For his role of the policeman, Frank Serpico actor was again nominated for Academic Awards and for British Academy of Film and Television Arts Awards and also became the winner of the Golden Globe.

In 1974 "The Godfather Part II" was released and Pacino was nominated for Academic Awards for the third time in his life. Moreover, this role together with the character of Santino in the thriller "Dog Day Afternoon" brought him BAFTA Awards and a prize at San-Sebastian Film Festival.

Then he took part in the following projects: a drama "Bobby Deerfield", a criminal action movie "Cruising", a melodrama "Author! Author!", historical drama "Revolution", melodrama "Sea of Love" and in other movies.

But the majority of these movies were met with indifference by the audience and film critics.

In 80-s there was only one significant movie – a crime drama "Scarface", in which Al Pacino played the role of Cuban drug lord. This movie was criticized by the experts, but the picture had a big gross and with time it became a cult picture. For this role, Al Pacino was nominated for the Golden Globe.

Early 90-s were very successful for the actor. At first, a gangster movie "Dirk Tracy" based on comics was released. For his role in this movie, Al Pacino was nominated for Academic Awards in six categories and for the Golden Globe in 11 nominations. The same year the sequel to the famous mafia drama "The Godfather III" came on the screen. In 1991 Pacino together with Michelle Pfeiffer played major parts in the tragic comedy "Frankie and Jhonny".

The year 1993 brought actor a long-anticipated and desire Oscar statuette for his role of blind lieutenant colonel Frank Slade in the movie "Scent of a Woman". Most of all the spectators remembered an episode when Al Pacino dances the tango with Gabrielle Anwar.

After this, he successfully participated in the following movies "Heat", "City Hall", "Donnie Brasco", "Any Given Sunday", "The Insider" and "Chinese Coffee". The spectators noted the movie "Heat" featuring not only Al Pacino but also Robert De Niro. In 1996 Al Pacino appeared in the movie "Looking for Richard" as director and producer.

The famous mystic picture "The Devil’s Advocate" in which actor played the role of Devil brought him huge popularity. Keanu Reeves, who played the major part became his partner on the movie set.

In new millennium critics also mark other acting works of the actor: his role in detective series "Insomnia", in a criminal drama "People I Know", in an action movie "The Recruit", in a screen-adaptation of Shakespeare’s play "The Merchant of Venice", in a detective "Righteous Kill" and in a TV movie "You Don't Know Jack", for the role in which Al Pacino awarded Golden Globe, Emmy, and BAFTA. These roles were really significant in actor's career.

In 2014 the movie "Danny Collins" came on the screen. The spectators really liked this real story of a folk singer Steve Tilston and the critics again recognized actor’s talent.

Al Pacino tries to keep his romantic relations in secret. The Hollywood is said to have had many love affairs, but most of these women are not known to the public. Al Pacino had never registered his relations officially.

In 1967 actor dated theater actress Clayburgh – his partner in the play "America, Hurrah". Their relationship lasted for 5 years.

In 1972 on the movie set of "The Godfather" Al Pacino hot acquainted and began dating Diane Keaton. Al and Diane separated in 1974. Also, he had a long-lasting relationship with the actress Marthe Keller, which after their break-up grew into many years of friendship.

Jane Tarrant, a teacher of acting studies, bore a daughter of Al Pacino and gave her a name – Julie Marie Pacino. Nevertheless, the actor stayed a bachelor and in a short time, he left Jane. This woman never became the actor's wife.

The longest relationship Al Pacino had ever been in lasted for 8 years. Since 1996 till 2003 American actor was in relations with Beverly D’Angelo, who gave birth to their twins Anton James and Olivia Rose. As it is known, the last passion of actor was Lucila Sola.

You can hardly call the Hollywood star tall. Al Pacino is 170 cm high, but his physical appearance is compensated with his charisma.

The public has an interest in the actor's private life. In 2017 Mass Media published the photos, in which Al Pacino was captured in the company of his 38-year old beloved woman. The couple was on vacation in Mexico.

It is said, that Argentinean actress Lucila Sola became Al Pacino’s beloved woman. Since 2011 the couple was separating from time to time but then they renewed their relationship.

In 2016 the movie "Misconduct" was released on the screen. The movie failed because it earned less than 100 Pounds Sterling during the first week after the premiere.

Such a result obviously disappointed directors and producers. Creators of the movie were sure, that this cast of Hollywood stars (Аl Pacino, Anthony Hopkins, Josh Duhamel), who took part in the movie could have helped to conquer the world movie market, but unfortunately this never happened. It is supposed that the picture budget evaluated $11 million.

Also, some information appeared in Mass Media telling that Al Pacino would play the character of the great American playwright Tennessee Williams.

To realize this project the actor got back to Broadway and signed the contract for the performance of the leading role in the play under the title "God Looked Away". This play is an adaptation of biography of the significant playwright Tennessee Williams.

The rehearsals began in Los Angeles and Robert Alain Ackerman was the director of the play. For the last time, Al Pacino appeared on the stage in the theater play "China Doll" directed by David Mamet in 2015.

The start of the play wasn’t very successful because of retardations, which were caused as the directors wanted to provide recent developments. The performance was criticized by critics. However, Al Pacino claimed that this role helped him to disprove negative predictions. The play earned $1million dollars for one week, though other Broadway plays disappointed their directors with financial impacts.

In September 2016 Al Pacino’s favorite mansion, situated around Los Angeles was put up for sale. The realtors evaluated it in $195 million dollars.

"Arrogance and pride are Devil’s servants. If you can’t rule them, they will rule you".

"The first rule is never to give up. The second rule is – remember about the first ".

"I don’t need a beautiful wife, with my money I can give her any appearance. I don’t need a rich wife. I already have it all. I don’t need a gentle wife. Almost every woman will be gentle for my money and I will conquer those who won’t. Fidelity and good reputation can’t be bought for all the money in the world".

"Books and plays helped me to get to know about my own mind and the world around, and then something happened, there was a shift and became more serious". 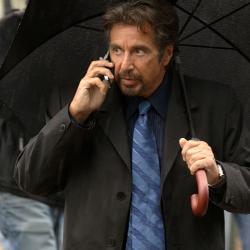