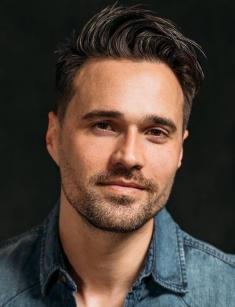 Brett Dalton is an American artist, whose name was widely known through the participation in the TV series Agents of S.H.I.E.L.D. The artist embodied one of the heroes of the universe Marvel Comics on television.

The full name of the artist is Brett Patrick Dalton. He was born in the American city of San Jose on January 7, 1983. Brett's parents worked in serious companies: his father was a banker and his mother was engaged in insurance services. They planned the same future for their son. But Dalton went against the family. He was not going to be an entrepreneur because the boy was fascinated by acting from an early age.

The theater attracted the attention of a teenager when he studied at school. Brett read the play One Flew Over the Cuckoo's Nest for the casting in the theater circle. The work inspired him so much that Dalton decided to devote the following years to studying acting. The hobby of the guy did not affect his performance: the student studied well and was even president of the student council.

After graduation in 2001, Brett did not change his principles and studied at the University of California. After receiving a bachelor's degree, the young man studied at the Yale School of Drama. In 2011, he received a Master of Fine Arts.

Brett left the University with a wealth of experience. He managed to try his hand on stage in the productions of Romeo and Juliet, Happy Now?, Sweet Bird of Youth, Demon Dreams, Macbeth, You Can't Take It With You. Some of the performances were shown at the Williamstown Theater Festival. Since then, the artist's biography has been associated with the shooting and work on the images of future heroes.

After graduating from University, the guy turned to the services of an agent and spent many days in the casting before he was lucky. The debut of Brett Dalton took place on television in 2007. The actor got the role that made him famous in 2012. He successfully passed the casting for the project Agents of S.H.I.E.L.D. The producers asked him to turn into the agent Grant Ward.

The plot of the series tells the story about the everyday life of a superhero organization, in which Ward is included. The project is based on Marvel Comics. The cooperation with the creators of the serial film was successful because the project extended after the release of 6 seasons, the project was extended. The role of a secret agent brought to Brett popularity with the public. In the series, his partner was Chloe Bennet, who played Daisy Johnson.

In 2014, the actor won the "Teen Choice Awards," according to the teenage audience, "Breakthrough of the Year." 2016 brought the artist a nomination for the same award. He was nominated in the Best Villain category. In parallel, the actor was involved in the film Killing Lincoln, created by National Geographic.

The project Marvel opened the way to great opportunities for Brett. He drew the attention of the producers of other shows. In 2012, the artist was invited to participate in the project Blue Bloods. He appeared in the series Army Wives the same year and the best movie in Dalton's filmography was the series Elementary, in which he was called in 2018.

The actor showed his universality when he worked with the postproduction of the cartoons Jake and the Never Land Pirates, Robot Chicken and Milo Murphy's Law as a voice specialist.

In 2015, Brett gave his voice to Michael Monroe in the video game Until Dawn, released for the console Play Station 4. The project also involved the actor Rami Malek. The dubbing character of Dalton was so successful that the artist was nominated by the National Academy of Video Game Trade Reviewers.

In 2017, Brett drew the attention of producers of full-length films. He starred in the movie The Tourist and then he was involved in the filming of Resurrection of Gavin Stone.

Brett Dalton was close to the actress Lupita Nyong'o at the Institute, with whom he had friendly relations. The attractive young man enjoyed attention of girls, so he could choose. He met with his wife Melissa Trn Brett at Yale University. Their relationship began in his student years. The wife of the actor works as a costume designer now.

In 2012, the family celebrated the birth of their daughter Sylvia. The engagement of Brett and Melissa took place 3 years later. The couple's wedding took place in Los Angeles. The ceremony was attended by the close circle of the artist and his beloved.

Brett and Melissa do not expect the emergence of children. The family enjoys traveling and spending time together. Brett Dalton tells about his everyday life on his account on "Instagram," where new photos appear.

Brett is not only a talented television actor but also an aspiring playwright. His debut play is called Footprints in the snow. The artist is also fond of dancing, although he was never engaged in it professionally.

In 2018, Brett was invited to Los Angeles Comic Con. The actor embodied the image of the leader of the organization on television, Grant Ward and he continues to play this role in 2019. Brett Dalton has a net worth of $2.25 Million.

The journalists interviewed the actor at the event, asking questions about how did the characters after clicking of Thanos.