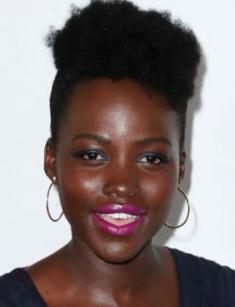 American actress of Kenyan origin Lupita Nyong'o did not start as a character of action movies or tearful dramas. The girl woke up famous after playing only a supporting role in the drama movie about the life of slaves.

The biography of the actress is bright and full of events. Lupita Amondi Nyong'o was born on the first day of March in 193 in Mexico City. The girl's father was a senator, professor at a university, and a worker of the United States Department of Health and Human Services (according to another source, he worked in some other department).

Lupita's mother, Dorothy Ogada Buyu, devoted herself to raising her six children. Peter Anyang' Nyong'o became interested in politics and called for democratic changes in Kenya. Fearing for the security of his family, he moved to Mexico City, where he started teaching Political Science. There the future movie star was born. The girl's name is a diminutive of Guadalupe, a Mexican Saint.

Soon the Nyong'o family returned to Kenya. When Lupita grew up, her father sent her to Mexico City to study Spanish. Then, seizing the opportunity, she enrolled in Hampshire College in Massachusetts, received a Bachelor of Arts degree from Yale University. The actress speaks Luo, Swahili, Spanish, and English.

In her thesis, "In My Genes," Nyong'o acted as a producer and director. After graduation, she participated in theatrical productions and assisted in filming, including some projects of Ralph Fiennes.

Lupita's talent was noticed on the set of the movie 12 Years a Slave. In the movie, the actress played a slave Patsey, humiliated by the owner of a cotton plantation (played by Michael Fassbender). The cast also included Brad Pitt, Benedict Cumberbatch, Sarah Paulson, and Paul Dano. The story was based on the memoirs of a free American, Solomon Northup. The man came to Washington in search of work, and fraudulently fell into slavery.

The motion picture was a great success: prizes in more than 60 nominations of international associations and awards, from Saturn to the Golden Globes. For her supporting role, Lupita was awarded the Empire Awards, Actor's Breakthrough, BAFTA, the Academy Awards, Sputnik, and Screen Actors Guild. And this is not to mention numerous prizes from societies of cinematic art critics. In 2014, the black actress was listed as the most beautiful woman in the annual list created by People magazine.

In the same year, Lupita Nyong'o worked with Julianne Moore and Liam Neeson on the American action movie Non-Stop. The detective motion picture is a strange mixture of mysterious deaths on board of a plane, drugs, and blackmail.

In 2015, the image of the actress was used to create a humanoid Maz Kanata, a character of the science fiction saga Star Wars: The Force Awakens. According to the movie's plot, Maz Kanata is a friend of Han Solo. Chewbacca falls in love with her and tries to win her heart.

The same character appeared in the next episode of Star Wars: The Last Jedi. The movie became the leader of the box office. On the set of the saga, Nyong'o tried the motion technology for the first time. In this movie, Carrie Fisher appeared in the character of Princess Leia for the last time. Besides her, the cast included Harrison Ford, Gwendoline Christie, Mark Hamill.

In February 2016, Lupita made her Broadway debut in the Eclipsed production. This is a play about the civil war in West Africa, written by actress and playwright, star of the series The Walking Dead, Danai Gurira. Danai, like Nyong'o, fled her homeland of South African Rhodesia. The play brought Lupita a Tony nomination.

The girl gave her voice to the wolf Raksha in Disney's adaptation of Rudyard Kipling's stories, The Jungle Book. The movie with animation elements won an Oscar for visual effects.

The Oscar-winning actress is not just a model of style and a fashion icon, she is also the face of the Lancome brand. However, she doesn't consider herself so attractive. And this despite the fact that her photos adorn the covers of glossy magazines, her name gets into the top-lists with the prefix "most" and" best," and she does catwalks, representing world brands.

The list of Lupita's close friends includes Michael Fassbender and Jared Leto. It has been said that Michael wanted to bring their relationship to the next level, but after the hype around 12 Years a Slave had died, the feelings of the actress were gone too. Michael even brought his mother to the Academy Awards ceremony, which gave grounds for talks about the seriousness of his feelings.

In turn, when Nyong'o introduced Jared to her mother, the actor joked about the actress as his "future ex-wife" from the stage. Rumors reappeared with a new force.

Another name from the list of people fallen at the feet of the star is Canadian-Somali rapper K'Naan (Keinan Abdi Warsame). The actress met the beloved children from his previous marriage. In the spring of 2014, the couple got engaged. But then the lead singer of Thirty Seconds to Mars appeared in her life again.

Recently, on the questions of curious fans, Nyong'o jokes and answers that her schedule is densely packed with working projects. Nyong'o's Instagram is full of photos and video clips from the set. She also posts pictures from her vacation and joint images with her family and friends.

The main man in Lupita's life is her brother Peter, with whom she lives in New York. The relatives of the actress also were prosperous in their careers. Her cousin, Isis, is one of the top 20 most influential businesswomen in Kenya. Her brother Tavia is a chief consultant on the native culture at New York University. The Nyong'o clan belongs to the Luo nation, from which also comes the former US President Barack Obama.

Lupita Nyong'o has a net worth of $8 million. At the end of 2017, Lupita joined the number of women who dared to admit that they were victims of sexual harassment by Harvey Weinstein. In an interview with The Hollywood Reporter, the actress said that the producer offered her to start an intimate relationship in exchange for success in the film career.

In 2018, came out the movie Black Panther, based on Marvel comics. The motion picture tells the story of a black superhero from the country of Wakanda. The plot of the movie covers the period after the events of the movie Captain America: Civil War. Lupita Nyong'o played the role of Nakia – the girlfriend and bodyguard of the protagonist in the performance of Chadwick Boseman.