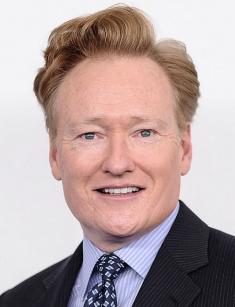 Conan O'Brien is an American TV host, comedian, writer, scriptwriter, and producer. He has become famous due to his sparkling humor, he replaced David Letterman in the popular Late Night program and later created his own show Conan on TBS cable channel. The Simpsons series in which O'Brien was working during two seasons became the most famous work of Conan in the role of producer and scriptwriter.

Conan Christopher O'Brien was born on the 18th of April, 1963 in Brookline, in the State of Massachusetts. His father Thomas Francis O'Brien was a physician at one of Harvard colleges; he was an epidemiologist by his specialty. Sometimes he practiced epidemiology as a doctor. Conan’s mother Ruth Reardon was a partner and an expert in Ropes & Gray law firm, and later she left her job and got engaged in the upbringing of her six children.

When studying at secondary school, Conan was an editor of the school newspaper; he worked as a trainee at congressman Robert Drinan. Being a student of the high school, he won a literary competition, having written the story under the title "To Bury The Living."

In 1981 O'Brien entered Harvard University where he concentrated on the studies of history and literature. In youth, during some time he was playing the drums in The Bad Clams music band and worked in the student's Lampoon comic magazine. Later, he became the editor-in-chief of this magazine.

When Conan finished the university, he moved to Los Angeles and got into the group of the scriptwriters of the humoristic television series Not Necessarily the News, which was broadcast on HBO channel. The project consisted of the sketches and parodies for the real events which took place in the country and in the world. Then during two years, the beginning author was working in The Wilton North Report talk show which represented the mix of comedy sketches with the musical performances.

In 1988 O'Brien began to work in Saturday Night Live show to which he was invited by the producer Lorne Michaels and received the post of one of the scriptwriters. He wrote such sketches as Mr. Short-Term memory, The Girl Watchers and Nude Beach which the public remembered due to many times repeated word "penis."

In some episodes, the guy appeared as a comic. The spectators especially liked his parody to the Superman in the sketch The Molecular Man. During the strike of the authors of the show at the end of 1988, Conan together with his colleagues began to work in the improvised comedy show Happy Happy Good Show for which theyi received Emmy Awards in 1989 in Chicago.

In 1991 O'Brien left this Saturday evening show, considering it the past stage of his career. In a short time, he received the invitation to work in the animated series The Simpsons, to which many authors wanted to get. This vacancy helped the scriptwriter overcome his creative crisis, and he began the part of this project’s team soon. Conan has made this series a little bit surrealistic and created a number of the most memorable episodes of The Simpsons, among which were the following ones - Marge vs. the Monorail and Homer Goes to College.

At this time the leader of Late Night TV show David Letterman was planning to leave the project, and the producers were looking for another showman to replace him. Lorne Michaels offered Conan to try himself in this role. During the audition, the authors of The Simpsons series were O'Brien's guests, and he felt very comfortable in their company. The spectators liked the debut release which was broadcast via satellite and on the 26th of April of 1993 Conan officially became the new TV host of the program. After this, he broke the contract with The Simpsons direction.

Despite the success of the pilot episode, the premiere of Late Night show with the participation of the new owner of the studio turned out to be a failure. The critics noted that O'Brien "was too smart, too refined, too young and even too tall" (he is 193 cm high, and weighs 86 kg).

Trying to improve the situation and to avoid dismissal, Conan added more jokes to the communication with his partner Andy Richter. The rates of the program began to take off, and by 1995 this program became incredibly famous at the young male audience, the number of which reached 2.5 million people.

Since 1996 O'Brien and the team of Late Night with Conan O'Brien team were annually nominated for Emmy Awards for Best Script of Comedy or Variety Series which they won in 2007 together with American Screen Actors Guild Awards.

Conan was working in this project until 2009. During the last release of the program, he was grateful to his colleagues and the heads of the program. Later, on the air, he crushed the shooting stage and gave the fragments to the spectators, who were present in the studio.

O'Brien transferred to The Tonight Show program which was broadcast at the prime time and was the host of this program till the moment when the heads of the program decided to change the time of the air to increase the rates. Conan broke the contract with NBC channel and continued to work on his own. In February of 2010, O'Brien created his personal account on Twitter and began to publish his own jokes. A day later he already had more than 300,000 subscribers, and in three the number of his subscribers reached one million.

Conan decided to interact with the spectators directly, and on the 12th of April, 2010 the former TV host went on tour with the comic program called The Legally Prohibited from Being Funny on Television Tour. His colleagues in the movie took part in it. They successfully performed with the concerts in Canada and North America and finished in Atlanta in June of 2010.

Before the tour, O'Brien announced the release of the new comedy show called Conan which was premiered on the 8th of November of 2010 on TBS cable channel. The project created together with Coco team was broadcast daily since Monday till Thursday at ten o'clock in the evening and collected the numerous audience. Due to this, the program received the contract until 2022.

Ben Affleck, Jesse Eisenberg, Conor McGregor, and other celebrities became the guests of the TV host. Each release was shot in a friendly atmosphere, contained sparkling jokes and unusual topics. For example, the American actress Elizabeth Olsen was telling about the time which she spent in Russia on the air and gave O'Brien the lesson of "the bad Russian language." The photos with the participants of the show are posted on the Instagram page of the project.

In 2000 on the movie set of Late Night show Conan got acquainted with his future wife, Elizabeth Powel. In two years the couple got married in Seattle, in the native town of his bride. The couple has two children – the elder daughter called Neve and the younger son Beckett.

In 2009 their family moved from New York to Los Angeles and settled in the mansions which cost is estimated at $10,5 million.

O'Brien knows many celebrities, for example, the star of the series Friends Lisa Kudrow has been his close friend for many years.

At present O’Brien has a lot of work. He goes on tours to American towns with Conan & Friends an Evening of Stand-Up and Investment Tips program.

Nothing is known about the future plans of Conon, except for the fact that the spectators will soon see the new episodes of his comedy show. 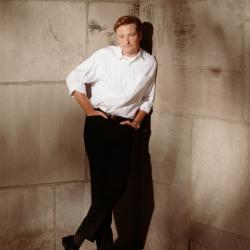