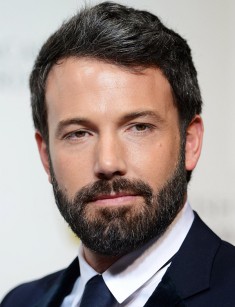 Ben Affleck (full name Benjamin Geza Affleck-Boldt) was born in Berkeley on August 15, 1972. His father worked as a physician and his mother was a teacher. Ben's father - Scotsman Tim Affleck - in his youth also wanted to be an actor. He even had very good relations with such celebrities as Dustin Hoffman and Blythe Danner (mother of the actress Gwyneth Paltrow). But because of his alcohol addiction, Tim didn’t become an actor. He went to California and got a job as a physician, leaving his wife with two sons. In 1984, after the divorce of his parents, Ben moved with his mother and brother Casey to Massachusetts.

Christine brought up her children alone and dreamed that Ben would follow in her footsteps and become a teacher. But the woman pushed her son to the profession of the actor. 7-year-old Ben got the role in the series "The Voyage of the Mimi." After this small role, the boy understood that he wanted to be an actor. In addition, on the set, Ben met his best friend Matt Damon who also dreamed of becoming an actor. Teenagers went to auditions together, appeared in secondary roles and hoped to get better roles.

Affleck and Damon lived nearby, went to the same school and attended acting courses. According to Damon, Jerry Spas, who taught them, gave Affleck the most important roles and long monologues. Ben often invited his friends at home; they drank beer and smoked.

After graduating from school, Ben Affleck entered the University of Vermont. The only motive for this was his love for a girl Cheyenne, who did not even studied at that university. She lived nearby and went to school. But the girl didn’t love Ben. So Ben left the university and moved to Hollywood.

His mother was shocked. The woman knew that her son liked parties and Hollywood is a place where there are a lot of bars, alcohol, etc. And when Ben earned his first big money, he rented a house near the ocean and invited almost 1 thousand people to the party. In the same period, Ben tried to get a higher education and entered Occidental College in Los Angeles.

Hollywood was indifferent to Ben Affleck. The beginning actor constantly went to auditions but appeared only in episodic roles. Sometimes the young man got small roles in films. So he appeared in the films "Wanted: The Perfect Guy", "The Second Voyage of the Mimi", "Daddy", "Buffy the Vampire Slayer", "Dazed And Confused".

Only in 1995, the famous director Kevin Smith noticed the young actor on the set of the movie "Mallrats". And two years later, he offered him the main role in his film "Chasing Amy." The film did not bring popularity to Ben but Smith played a significant role in future. Ben Affleck's film biography began to develop. Affleck appeared in half of the movies by Kevin Smith. He starred in such films as "Mallrats", "Dogma", "Jay and Silent Bob Strike Back", "Glory Daze", "Mad TV" and others.

Affleck did not finish college because of his difficult character. Once, his teacher criticized a short story, created by him and Matt Damon, calling it "nonsense". Later this story will become the basis of the scenario for "Good Will Hunting". This film made Matt and Ben really popular.

The main role in the film was played by Matt, who turned into a clever guy who worked as a cleaner. Affleck played his best friend. In 1998, the film received two Oscars - for the best scenario and the best supporting role (Robin Williams). The script of the film was also awarded the "Golden Globe". The actors of the main roles also received the award of the National Board of Review.

“People” magazine included Ben Affleck in the top 50 of the most beautiful people on the planet. Affleck got a lot of different offers. The actor starred in the tragicomedy "Shakespeare in Love", and also played along with Bruce Willis in "Armageddon." A significant role in the career of the actor played the film "Pearl Harbor", which in 2001 was the world leader.

Affleck, like most of the Hollywood actors, had not only successful projects. The screen version of the comic book "Daredevil" starring Affleck got positive reviews from critics and good box office. But the movies "Gigli", where Affleck starred along with Jennifer Lopez and "Surviving Christmas" were unsuccessful. And the Affleck-Lopez tandem was named the worst actor's duet in the history of cinema.

Another unsuccessful movie was "Paycheck " (2003) by the famous director John Woo, starring Uma Thurman and Aaron Eckhart. But this did not affect the actor's reputation.

In 2006, he was approved for the role in the biographical film "Hollywoodland", dedicated to the mysterious death of the actor George Reeves, who played the legendary American hero for the first time. The film was awarded several awards and Ben received the Golden Globe.

In 2009, Affleck played the role of the boyfriend of the main character played by Jennifer Aniston in the comedy "He's Just Not That Into You." In 2010, Affleck starred in the social drama "The Company Men", which tells about the problems of employees during the crisis. The film did not get even 1/3 of 15 million dollars spent on its production. But the film was remembered by the participation of such Hollywood stars as Tommy Lee Jones, Kevin Costner and Ben Affleck.

At the beginning of the 2000s, Affleck appeared on the screen not very often. He preferred to participate in his own projects. Affleck tried to work as a director, screenwriter and producer. One of the successful projects was the thriller "Argo", based on real events. The film tells about the rescue of American diplomats in Iran in 1979. The main role was offered to Brad Pitt but he refused because of his employment. Affleck had to combine the duties of the director and actor. Brian Cranston, who starred in the series "Breaking Bad", did not refuse to play in the film. The film received three Oscars, including the main award for “The Best Picture”.

Affleck already had a successful experience in working as a director and actor in the film "The Town". The film collected 23 million dollars at the box office only for the first weekend. The producers of the film spent 37 million dollars. The film was highly appreciated by American critics. It received the awards of the Association of Film Critics of Washington and the National Council of Film Critics of the United States in the nomination "For the Best Acting Ensemble". And one of the actors, Jeremy Renner, was nominated for Oscar for Best Supporting Actor.

Affleck also appeared in the thriller "Gone Girl", released in 2014. In the film, Ben played the husband of the disappeared main character (Rosamund Pike). A year earlier, the actor starred in the thriller "Vabank" by Brad Furman. Ben's partner was Justin Timberlake, and the story tells about the inner world of online gambling.

In 2016, several superhero films with the participation of Ben Affleck were released. But if in the film "Batman vs. Superman" he played the main role of a human bat, in the "Suicide Squad" he appeared only in the episode in the role of Batman.

Both films received a lot of nominations for "Golden Raspberry" for the worst film of the year. "Batman vs. Superman", in which, along with Affleck played Henry Cavill (Superman) and Gal Gadot (Wonder Woman), received more negative reviews. Will Smith, Margot Robbie, Jared Leto and others played in "Suicide Squad ". The film received several nominations for "Golden Raspberry" and one "Oscar" nomination for best make-up and hairstyles.

The film "Batman vs. Superman" is not the only work of Affleck in 2016. At the end of the year, there was a premiere of the action film "The Accountant" by Bill Dubuque. The script was proposed in 2011, but the preparation for the shooting lasted 5 years. Instead of Affleck, the main role could have been played by Will Smith, and the directors instead of Gavin O'Connor could have been Coen brothers and Mel Gibson. Affleck played the role of an accountant with autism, a brilliant mathematician, who worked for dangerous organizations. It is interesting, but the film producers used a 35-millimeter camera.

At the beginning of 2017, the crime drama “Live by Night” was released in which Affleck acted as a director, screenwriter and actor. This film is an adaptation of the novel "Live by Night" by Dennis Lehane. The plot of the picture tells about the 20s of the last century. The son of the captain of the Boston police Joe Coughlin becomes a bootlegger, and later - a gangster. One of the producers of the project was Leonardo DiCaprio.

Ben’s brother Casey is also successful. Despite the political education of Casey, the younger brother received "Golden Globe" for the main role in the film "Manchester by the Sea" (2017), as well as two nominations for Oscar for "Manchester by the Sea" and for “The Assassination of Jesse James by the Coward Robert Ford". The elder brother in 2017, on the tenth anniversary, was nominated for the Golden Raspberry.

The first love of Ben Affleck was Cheyenne Rotman. He even entered the University of Vermont because of her. But the actor did not finish his studies. The girl didn’t want to begin relations with Ben; and 10 years later the actor would call this sad love story the biggest disappointment in his life.

But it was before his Hollywood career. In 1997, Affleck began relations with Gwyneth Paltrow, who at that time just broke up with Brad Pitt. Their couple has long been considered an example for others in Hollywood, but they broke up. During the film "Shakespeare in Love," Paltrow fell in love with Joseph Fiennes. Affleck even saw them together. After that, they broke up, despite Gwyneth's assurances that they were only rehearsing their roles.

Until 2002, the actor did not have a girlfriend, although there were rumors that he had relations with Nicole Kidman, Sandra Bullock, Famke Janssen. And in 2002, on the set of film "Gigli" Affleck began relations with Jennifer Lopez. Even the date of the wedding was set but they didn’t get married. Four days before the ceremony, the actors parted. Later Affleck said that this relationship exhausted him so much that he could act in films.

After parting with Lopez, Affleck began to appear in public with Jennifer Garner, with whom he starred in “Pearl Harbor” and “Daredevil”. In 2005, the actors secretly married in the Caribbean, and at the end of the year, their daughter Violet Ann was born. Later two more children were born- a daughter Seraphina Rose Elizabeth and a son Samuel.

After 10 years of marriage, the couple announced about their divorce. In winter 2017, once again, there appeared news that the couple finally decided to divorce. According to their friends, Affleck still lives in their common house and wants to save relations. According to other information, Affleck decided to rent an apartment. The reason for family quarrels was the affair of Ben and the nanny of their children.

One of the reasons for the prolonged divorce and the fact that Affleck recently returned to the common house, is that Jennifer Garner is pregnant for the fourth time. There are pictures with a belly of the actress. The actors did not officially confirm anything.

Ben Affleck is not only a great actor but also an excellent poker player. He once won more than $ 350,000 in the California State Poker Championship Sunday. Therefore, Las Vegas is his favorite city. He often stays there for weeks. However, the actor not only visits casinos but also devotes his time to charity. He helps the A-T Children's Project, the non-commercial organization that helps children with a rare muscular atrophy syndrome. The actor speaks French and Spanish fluently. In college, he studied the Arabic language. Ben Affleck loves coffee, collects motorcycles and is afraid of flying.

• The force of nature

• He's Just Not That Into You 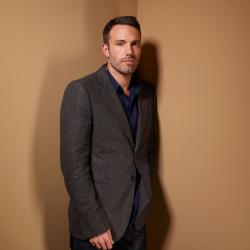