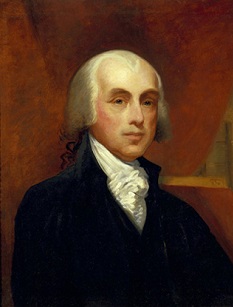 James Madison was one of the principal characters in American history. Thanks to this Founding Father the young country gained the Constitution and became independent, however not totally, due to the massive amount of debts. But in only especially proved the might and insubordination of the newly formed states.

James Madison was born on the 16th of March, 1751 at Belle Grove Plantation, which was his mother’s childhood home too. Eleanor Rose "Nellie" Conway was a daughter of Francis Conway, a successful businessman who made his fortune selling tobacco. The place Port Conway was named after Francis, the most budding planter in the area.

Madison’s parental grandfather was prominent too with his plantation Mount Pleasant and 2,000 ha of land with the abundance of slaves. He was also specializing on tobacco, and Madison’s father, James Madison Sr. inherited his estate and social status, being the major citizen on the plateau of Piedmont, a region located in between the Atlantic coast and the Appalachian Mountains. At that same land a new house was built during the 1970s - Montpelier, where at least two generations of Madisons would have grown up.

James Madison had eleven younger siblings; however, some of them didn’t make it to adulthood.

From the age of 11, James started receiving private education from a prominent tutor Donald Robertson, whose service was quite eligible with well-to-do Southern families. He learned basic disciplines such as mathematics, geography, languages. So, James didn’t go to either middle or high school. Then he continued his studies under the Reverend Thomas Martin back in Montpelier, preparing for a college course. Despite the accepted tradition for all Virginians to go to the College of William and Mary, James was sent to Princeton University (then called the College of New Jersey). It was done so due to his feeble health which might have been affected by the lowland climate in Williamsburg.

In Princeton, James Madison was converted to the ideas of liberalism. While it took him only two years to finish a three-year-course, completing his BA. Great effort was made studying Classical languages, religion and the ideas of the Enlightenment; at the same time, Madison co-founded one the oldest debate clubs in the U.S., American Whig Society, trying to overcome Aaron Burr’s achievements with his Cliosophic Society. Later a united society was formed, and it exists and functions till nowadays.

John Witherspoon, who was the President of Princeton at that time, accentuated the way and let James Madison absorb his moral values and philosophy, that were strongly influenced by the Age of Enlightenment. From that moment on civil and political liberties became prevalent in Madison’s aspirations.

After graduation, Madison got back to Montpelier and started tutoring his young brothers and sisters, while pondering on the situation with Britain. He got interested in the relationship between the monopoly and the colony, that took a turn for the worse after changes in taxation. He was also opposite the Anglican Church in the state since he considered an established religion to be an indication of narrow minds.

In 1774 he joined the Committee of Safety, a patriotic group, which demanded revolution and controlled local police. It was Madison’s start on the field of public service that later made him and his family prosperous. There he took up writing anti-British resolutions.

In October 1775 Madison was appointed as a colonel of emergency volunteer corps in Orange County but resigned as he was elected as a delegate to the Fifth Virginia Convention, set up to compose the Constitution of the state. The future president has never excelled on the battlefield, however, made a career as a wartime leader.

Madison became a part of the Council of State and very close to Governor Thomas Jefferson. On expiry of the two-years service, he joined the Second Continental Congress, which represented the central government institution at that time. A devastating war with Great Britain led to the specter of all social and economic problems, so Madison found himself in need of improving and enriching his knowledge. He tried to insist on an amendment that was supposed to guarantee stable income for the Congress. Although some key figures of that time agreed with him, the proposal was declined, and Madison returned to Virginia, disappointed with the work of government.

Father of the Constitution

The most important achievement of Madison in the 1780s was his so-called Virginian project that was presented on the Constitutional Convention. It included the ideas of creating a stable national government that would be more powerful than the regional ones and could veto the inappropriate legislation. He took a very active part in the debates on the Convention and wrote down lots of notes, which now historians can consult in order to recreate the birth of the Constitution with accurate facts and details.

The Constitution was produced by joined forces of John Jay, Alexander Hamilton, and James Madison and consisted of eighty-five essays; a third of them was written by Madison. First, these works were called the Federalist Papers. Madison put a lot of effort in promoting his points of view and pushing forward ratification of the leading state document. He succeeded in convincing the Virginia Convention despite the discontent of Anti-Federalists.

In 1789 Madison was elected to Congress, where he was appointed as a key adviser to George Washington, who was a president at that time. Washington required someone who would be an incredible expert on the U.S. Constitution, and the best choice was to consult the creator himself.

Madison worked alongside Hamilton again and supported him on the 1st Congress. However, he stood against the Secretary of the Treasury on the second one, denying the possibility of creating the National Bank to fund the state debt from.

On the 25th of September, 1971 Madison presented his amendments to Congress, that would later be known as the Bill of Rights. After a long research of other cases, he decided to introduce them in order to ease the assimilation of Constitution in the minds of masses and to repeat the points he considered the most crucial. These amendments included statements about individual rights and their superiority over federal laws. Thomas Jefferson also took part in the development of the Bill.

Madison was the 4th president of the U.S. and subsequently was depicted on the fourth coin released during the Presidential $1 Coin Program.

It was a hard time for the country, so Madison decided to function by the strict economic rules. Although he tried to resolve the conflict in Europe according to Jefferson’s plan, which included embargo, he failed. Finally, Madison considered such principles useless and requested the Congress to declare war on Britain. The War of 1812 resulted in the devastating incineration of Washington and the conservation of the state border.

He ran for the Republicans once again and was elected for the second after the war and started to revive the prosperity of the U.S.

Initially, Madison spoke for the strong federal government, but then changed his side and co-founded the Democratic-Republican Party. Numerous historians struggle to try to perceive Madison’s actions. According to various quotes, his was a nationalist but had quite another view than the Federalists.

As for the faith, Father of the Constitution wasn’t very religious but was interested in deist tracts and pressed for the religious liberty for everyone.

Madison made his future wife thanks to their mutual friend Aaron Burr, while they were both in Philadelphia. The wedding took place on the 15th of September, 1794. At that time Dolley Payne Todd was 26 years old and was married once before. Her previous husband gave her a son who survived after a yellow fever epidemic. Madison accepted the boy as his biological son due to the lack of other offsprings.

James and Dolley lived in perfect harmony and became really close. He was proud of his wife’s actions at official dinners and other important events since he accepted her status as his political partner. Somehow this led to the establishment of the position of the First Lady of the United States, which still considers as a prominent status for a president’s wife.