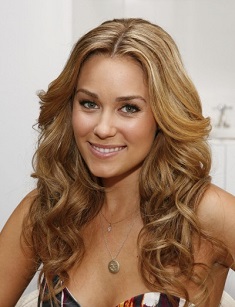 Lauren Conrad is an American TV personality, writer and designer. Her main occupation is fashion; she adores it. Lauren has her own line of clothing and home stuff.

Lauren was born in California in the family of Jim and Kathy. She has a sister, Breanna, and a brother, Brandon. Speaking about Lauren’s sister, she is also a television personality. Both sisters have starred in "Laguna Beach: The Real Orange County" (2004-2006).

When she was at the Primary School, Conrad's parents and Lauren herself understood that her passion is fashion. Lauren went to the Laguna Beach High School with other future actors such as Lo Bosworth, Kristin Cavallari, and Stephen Colletti. That's where her career began.

After graduating, Lauren went to the Academy of Art University in San Francisco just for half a year and then she returned to Los Angeles and studied at Fashion Institute of Design & Merchandising.

Like it was said before, Lauren's career started with her studying in a high school. In 2004 she and some eventual «castmates» starred in "Laguna Beach: The Real Orange County", reality TV series that is mostly focused on the private lives of Laguna Beach students.

Then, in 2006, right when Lauren came to Los Angeles, the spin-off of "Laguna Beach: The Real Orange County" was in process, so she started acting again. The critical part of that series was given to her relationship with Heidi Montag, also a TV personality, writer, designer. This friendship ended not in a nice way, actually. Lauren has been thinking that Heidi and Spencer Pratt, her boyfriend, were responsible for spreading the rumors about the sex tape with Lauren and her ex-boyfriend Jason Wahler on it. Lauren's work in ‘The Hills' was coming to an end. She made her last scenes on the series in May 2009, while going to the Montag and Pratt's wedding. After that Conrad confessed in Cosmopolitan that producers of the ‘The Hills’ had a lot of pressure on her, especially, in the issue of communication with Montag.

In 2009 Lauren appeared in the "America's Next Top Model" as a guest judge.

In September 2010, Conrad was supposed to star in an MTV series that was going to be focused on her career, but at the end, the network decided not to make this after Lauren preferred not to show her private life.

In 2007-2010 Lauren was a spokeswoman of Avon Product’s line for young women.

In March 2008 there was the premiere of her first fashion line The Lauren Conrad Collection. Unfortunately, sales results were disappointing, so Lauren stopped the creation of this line for some time for getting to know the industry itself.

In June 2009 Conrad published her first book named "L. A. Candy" which was inspired by her own life. This novel became a bestseller on The New York Times. Then, in 2010, there were sequels for this: "Sweet Little Lies" and "Sugar and Spice". Lauren also published the fashion guide "Lauren Conrad Style" in 2010.

Since 2009 Lauren has been collaborating with Kohl’s, a huge American department store. Firstly, she launched her second fashion line (as we remember, the first one was not successful at all) and later she added a bedding collection to this one.

In April 2011, Conrad opened ‘The Beauty Department’ with Kristin Ess, who styles hair, and Amy Nadine, who does makeup, besides she wanted to create a line of healthy cosmetics for skin and hair.

In October 2015 Conrad released limited collections for her brand that were inspired by Disney characters such as Cinderella, Minnie Mouse, and Bambi.

In 2017 Lauren created LC Lauren Conrad Beach Collection and made the best advertisement for it by posting the picture in the Instagram of herself caring her baby bump in the bikini that she designed.

Conrad not just only creates new collections, she also uses her fashion experience when she wants to dress herself. There was an event in 2018 – Paul Mitchell's Baby2Baby Gala. Lauren made a considerable impression: she wasn’t wearing anything too luxuriant. Everyone loved her minimalistic style and nude colors in dress and sandals.

In February 2012 Lauren started dating a law student William Tell who by the way used to be a guitarist in the band named "Something Corporate". In 2012 they moved together and announced about their engagement. That year they organized the online shop "The Little Market" with a lot of handmade pieces for women: bags, candles, jewelry, some stuff for cozy home and so on.

In 2014 William became Lauren's husband. In 2017 they announced about Lauren being pregnant and in July, their son, Liam James Tell, was born.

Lauren speaks rather openly about being a mother. Firstly, she shared in the Celeb Parents Get Real interview how it was challenging to be pregnant. Here's what she said:

"The hardest part… was just being pregnant. You’re so big and hot and uncomfortable. I have heartburn for six months straight."

When Conrad is asked about maternity, Conrad honestly says that it isn't easy, you always need to choose between being too strict and too, and there are a lot of things that an unprepared parent wouldn't know. But she is so delighted with her kid no matter what.

Speaking about interviews, there was one that really didn't go well. It was with Eric Andre, «the pseudo-host of his own pseudo-talk show, "The Eric Show" on Adult Swim. He is rather sarcastic and rough, and he tries to make an exciting, funny and extra-honest conversation. Let's look at what he said about the interview with Conrad:

"Lauren Conrad was really upset and mad at me, and she kind of walked off set during the interview. After, I gave her a bottle of wine and was like, Oh, you know I’m just fucking around. It’s all love. And then she just stormed out. Her publicist was so fucking pissed, screaming at us, You’ll never work in this town again! I’m going to ban you guys, blah, blah, blah!"

Lauren is a successful woman: she is a designer; she is a wife; she is a mother. Her net worth for the 2019 year is $25 million. Besides all her work as a designer, Conrad is also occupied by her charity work.

Regardless the recent birth of her child, Conrad doesn’t quit her job, she is still the lead designer of her own fashion line, she still creates new designs that please the eye of the whole world. Her clothing is about «modern silhouettes, softly feminine details and inviting home decor» for a «chic, effortless lifestyle.»

As we remember, Lauren started from just clothing and some bedding collections. Now, at the Kohl's we can also see jewelry (necklaces, earrings), great accessories, shoes, and handbags. Conrad’s collections are very different: you can find either gentle dresses or modern jeans. Besides that, she still has her little project that she has created with her husband – "The Little Market" which was by the way officially opened in September 2018 in Los Angeles.

Lauren has a web site where there is not only her shop and collections but also her own blog where she writes about fashion and style, gives her readers some advice: how to keep the relationship exciting and happy after child's birth? What engagement ring can you find when there is not a lot of money? What wedding dress is right for you? What clothes can be comfortable for a pregnant woman: leggings or just big dress?

The TV show "The Hills" where Lauren used to star, is going back on screen in 2019. Will Conrad participate at this time? We doubt that considering her retirement at the last time.