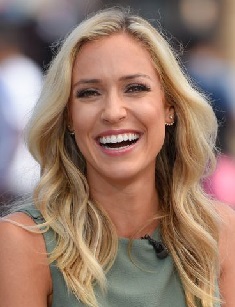 Kristin Elizabeth Cavallari is an American actress, social media celebrity and designer, who became famous mostly after appearing in the reality television show Laguna Beach: The Real Orange County, which demonstrated the lives of her and her friends. Kristin also has her own fashion brand named Uncommon James.

Kristin was born in 1987 in Colorado. Her parents’ names are Judith Eifrig and Dennis Cavallari. She also has two brothers: an older brother, Gabriel Zamora Cavallari, and an older one, Michael Cavallari, who died in 2015.

Cavallari attended Laguna Beach High School in California, and then she entered the Loyola Marymount University but got dropped out. Kristin had an interest in acting since she was seven.

Kristin was at high school when the new show Laguna Beach: The Real Orange County (2004–2005) began production, and young Cavallari became a part of it. That time, she had a relationship with Stephen Colletti, who also was a student at the same school. This romance also was connected with another person, Lauren Conrad; that formed the love triangle which was one of the TV show’s central plotlines.

In 2009–2010, the actress has been starring in The Hills, Laguna Beach's spin-off series. Kristin’s motto is that drama sells so when she stars in some show, she does not want to make any best friends; Cavallari considers it only as work.

Following Laguna Beach, Cavallari went to Los Angeles and signed on the UPN (United Paramount Network) television series Get This Party Started, which started airing in February 2006. After two episodes the show got canceled. Kristin also appeared in another UPN series named Veronica Mars (2006) and had some guest roles in CSI: NY (2008) and Adventures in Hollyhood (2007). In 2006, Cavallari played the leading role of Crystal in the horror film Fingerprints. In 2008–2009 the actress has appeared in some independent movies like Green Flash (2008) with Torrey DeVitto and Wild Cherry (2009) together with Tania Raymonde and Rumer Willis.

In July 2018, there was the premiere of Very Cavallari, the reality television series about Kristin, her family, and business. We can already watch the first two seasons, and in May 2019, it was announced that there would be the third season!

One of Kristin’s passions is food, so she has written a cookbook that is full of healthy recipes and named “True Roots - A Mindful Kitchen with more than 100 recipes Free of Gluten, Dairy, and Refined Sugar”. Her book has got into the New Yorker's best-selling list. Kristin has a net worth of $3.5 million which she gets mostly from her work on television and also her job as a designer.

Besides acting, Cavallari is really interested in fashion and making something on her own. What’s the most popular about her being a fashion designer is the cooperation between Kristin and Chinese Laundry, the women's footwear store that was founded in 1971 in Los Angeles. Women’s feet can be considered as such an important and beautiful part of their bodies, so Kristin makes some effort precisely in this field. Her collections include various types of shoes such as mules, booties, sandals, slip-ons, etc.

But that’s not all! Cavallari even has her own fashion and lifestyle brand, Uncommon James, for which she creates collections of jewelry, clothes (for instance, sweatshirts) and various accessories. Kristin prefers some nude colors in clothes, smartness, and simplicity at the same time, generally.

Kristin does a lot of charity work; actually, she is an activist in many fields. Cavallari has appeared in advertisements for the “Until There's a Cure" to make others pay attention to the AIDS and HIV, to raise funds that are needed for research and development of the vaccine. The actress also has been involved in the ads for PETA (People for the Ethical Treatment of Animals) and for the NOH8 Campaign, which promotes LGBT marriage, gender, and human equality. Kristin once was a spokesperson for “We Are Ellis Island," the company that aims to preserve historic buildings in Ellis Island.

In 2010 and 2011, Cavallari traveled to El Salvador and Kenya to do charity work for kids.

Kristin had some relationships with various famous people like Stephen Colletti, Brody Jenner, and Nick Zano. For now, she is happily married to Jay Cutler, a former American football quarterback, and they have three children together.

Cavallari and her present husband started dating in 2010 and got engaged next year in April. Also that year, in July they called off the engagement, but in November they changed their mind again. Finally, their wedding took place in June 2013. The spouses have two sons, Camden Jack (born August 8, 2012) and Jaxon Wyatt (born May 7, 2014), and a daughter Saylor James (born November 23, 2015). The family lives in Nashville, Tennessee. In 2018, they sold their mansion for $7.9 million and bought a new house for $4.2 million. At present Cavallari's net worth is $3.5 million.

In December 2015, there was a terrible accident: Kristin’s brother Michael died in a car crash because of hypothermia. Four days before his car was found, he was released from jail where he was put for making some threats. Brother’s death had a massive impact on Kristin and her family; they were rather close. Due to being a social media celebrity, Cavallari has some posts on her Instagram and Twitter accounts dedicated to Michael.

By the way, Kristin's admirers are really grateful to the actress for her activity in social media. So we can see her hot photos in bikini, pictures with her husband and kids, her daily InstaStories. Cavallari is an amazing woman with nice hair, beautiful facial features, and a good body, so why not to admire her photographs?