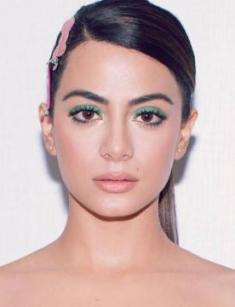 Emeraude Toubia is known as a model and actress, as well as a talented dancer and hostess of various TV programs. She was born in Canada but chose America to make a career in the modeling and movie industry, and she was right about it. There she managed to appear on television for the first time in the series, as well as to win many beauty contests.

Biography of the future actress began in the Canadian city of Montreal, where she was born on March 1, 1989, under the zodiac sign of Pisces. As a child, she moved permanently to Texas, USA, in Brownsville. It is difficult to determine Emeraude's nationality. It is known that her father has Lebanese roots, his parents came from the Koura District, Lebanon, and her mother, Mirta Sonia, was born in Mexico. The unusual mixture of roots gave the girl a beautiful appearance, which was noted by many when she was a child.

By nature, Emeraude has always been active, loved the attention of others, and felt free in unknown companies. Probably, that's why parents decided to participate with her in 1999 in the Mexican children's show El Mundo de los Niños. So it was the first time she appeared on television, and since then she had a dream of becoming an actress or TV hostess.

Since Emeraude was the only child in the family, parents did not spare money and time, and therefore tried to develop the daughter in all aspects. As a child, she was fond of classical ballet, lyrical dance, belly dancing, and flamenco. And it must be said that she did well. Dancing classes determined the girl's future fate in some way.

For the first time, Toubia managed to participate in the beauty contest at the age of 15. Hired teachers, as well as unshakable self-confidence, allowed her to get the titles of Miss South Texas, Miss Rio Grande Valley, and Young Miss Brownsville. Over time, modeling and advertising agencies became interested in Emeraude's appearance. This is how she got into the advertising campaigns of famous brands, who regularly sent her job offers.

The name of Toubia became known to the public in 2008 when she became a participant in the television beauty contest Nuestra Belleza Latina. There each nominee for this title held acting and dancing lessons as well as attended other classes. Every week girls competed for the title of the best. Toubia proved to the audience and jury that she deserved the 1st place. Later this victory helped her in her modeling career as well.

In 2009, Toubia was invited to another reality show Model Latina. However, the beautiful girl could not win there and took only the 5th place. But she was not very upset. And then in 2010, she got into the Miss Texas USA semi-finals.

Now on TV, Emeraude decided to try her hand at being a hostess and quickly found a job at the NBC Universo Channel. She hosted entertainment and music programs at different times. The model was one of the hosts on the red carpet of the Billboard Latin Music Awards in 2013.

Toubia's debut as an actress took place in 2010 with a minor role of an administrator in the series Aurora. However, this role opened the doors to the movie industry for her. Therefore, three years later, the model and the novice actress again appeared on TV screens in the series 11-11: En mi cuadra nada cuadra, which was broadcast on the Nickelodeon Latin America Channel.

And a year later, in 2014, Emeraude appeared in the telenovela Costa Linda in the role of Dulce Rincón. The next project of the actress was a series called Voltea pa' que te enamores, where she played the role of beautiful Stephanie Karam.

The first full-length feature film in which Toubia worked was the American action movie Tattooed Love released in 2015. The movie was created by directors Alejandro Antonio and Alberto Portillo. Emeraude got the leading role of Esmeralda and starred opposite Edy Ganem, Catherine Toribio, Laura Flannery, and others. And after this work, the model starred in the music video of the American singer Prince Royce, shot on the track Culpa al Corazon in 2016.

In the same 2016, Toubia was invited to the filming of the series Shadowhunters to play one of the leading roles. The actress worked on the set with Katherine McNamara, Dominic Sherwood, Matthew Daddario, Alisha Wainwright, and other actors. Toubia got the role of half-man half-angel Isabelle Lightwood.

This is a fantastic series, telling the story of a girl who on the day of her 18th birthday, learned that she is the heiress of an ancient family of Shadowhunters. It is a mysterious clan of semi-man-half-angels defending the world from demonic creatures. After the kidnapping of her mother along with two friends, the girl tries to save her.

Since 2010, Toubia has lived in Miami, Florida, and moved to Los Angeles in 2015. All this time, there wasn' t much information about the personal life of the actress, because the model preferred not to give details to her fans. However, in April 2016, it became known that she had been dating Prince Royce, an American singer of Dominican descent, since 2011. The couple decided to officially announce their relationship only after five years, and until then they had kept it carefully hidden from the press.

On June 20, 2017, Royce and Emeraude got engaged, which they said in an interview with an online publication. They were married in San Miguel de Allende, Mexico on November 30, 2018.

Toubia is connected with the singer not only with romantic relations. The model and her husband work together to support the non-profit organization Get Schooled, which uses the media and pop culture to inspire children and young people.

Toubia is still working on Shadowhunters currently. The second part of the 3rd season went on TV on February 25, 2019.

Emeraude is an active social network user and is registered on Instagram, Twitter, and other social networking sites. There she often uploads photos from work processes as well as personal images. Admirers look at them and mark the figure of a TV star.

And it is not surprising that with the height of 5'4'' (164 cm) and weight of 117 lbs (53 kg) the celebrity is not ashamed to post photos in bikini and other outfits. This can't be said about the images without makeup as the actress does not post such. The model and actress has a net worth of $1 Million.