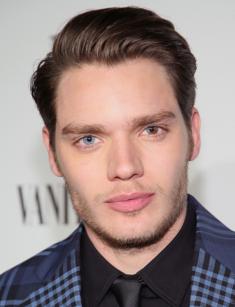 Dominic Anthony Sherwood is an English actor, known for his roles in the films Vampire Academy and Shadowhunters. Sherwood was born on February 6, 1990, in the town of Tunbridge Wells, Kent, the south of England. Soon the parents, who also brought up three more sons and one daughter, moved to Sevenoaks. The future actor graduated from Oakwood Park Grammar School in Maidstone.

Dominic studied drama and theatre in Maidstone and Sevenoaks; then he joined the theater company. Before moving to London, Sherwood was in Kenya for six months, where he participated in several productions. In the capital of the UK, Sherwood signed a contract with a television production company.

Dominic also began a modeling career. Sherwood attracted the interest of photographers because he was not only tall (5.90 ft. (180 cm)) and handsome but also had unique eye colors (heterochromia). Soon the phots of the young Englishman with different-colored eyes (blue and brown) appeared on the covers of fashion magazines.

One of Dominic Sherwood’s hobbies was music. In his youth, the actor began learning to play the guitar, trumpet, and drums. Dominic often sings. Since 2008, Sherwood has created music and lyrics for the band Tamarin Sky. The actor also participated in the filming of the video for Taylor Swift’s single "Style."

Sherwood began his acting career participating in Stephen Woolley’s film Stoned, dedicated to the biography of Brian Jones, the founder of the rock band The Rolling Stones. The film tells about the party lifestyle of the rocker, the use of drugs, alcohol, the musician’s relationship with Anita Pallenberg and Anna Wohlin, as well as his death at the hands of builder Frank Thorogood.

Leo Gregory, Paddy Considine, David Morrissey, Ben Whishaw, Tuva Novotny played the title characters in the movie. Dominic Sherwood got the secondary role of Alex. The same year, the fantasy family comedy Charlie and the Chocolate Factory, directed by Tim Burton, starring Johnny Depp, premiered in Hollywood. In the Hollywood film that grossed $ 475 million at the box office, Blair Dunlop played the role of young Willy Wonka, but many fans of the film considered that Dominic Sherwood appeared on the screen.

Since 2009, Sherwood has played in several TV series including the British melodrama The Cut about schoolchildren and the comedy Sadie J. Next time the English actor appeared on the screen in 2012 in the American film Not Fade Away, in which he portrayed the young singer, Mick Jagger. The drama tells about young musicians from the state of New Jersey who create their own rock band inspired by the music of The Rolling Stones.

In 2013, the actor was invited to play the role of Louis in the multi-part thriller film Mayday, which focused on the fictional town of pagans, Stowild, where the girl (May Queen) disappeared during the holiday. In 2014, Sherwood made a breakthrough in his acting career, playing in the fantasy melodrama Vampire Academy, based on the book by Richelle Mead.

Dominic Sherwood joined the main cast together with Zoey Deutch, Lucy Fry and Danila Kozlovsky. The film, based on the favorite topic of recent years tells the story of the struggle between two clans of immortal creatures, Moroi and Strigoi. It centers on two Moroi princesses Rose and Lissa, who study at the prestigious St. Vladimir's Academy. The project was broadcast in 42 countries of the world, 300 thousand people watched series in Russia.

Dominic Sherwood met his girlfriend on the set of the film Vampire Academy in 2014, in which Sarah Hyland played the role of Natalie Dashkov. At that time, the young woman was in a relationship with Matt Prokop, but by the beginning of 2015 she had broken up with him. The young man haunted Sarah for a long time, threatening to hurt her, and the actress had to apply to a lawyer.

Since then, nothing threatens the personal life of Dominic and Sarah. The couple enjoys spending time together, visiting amusement parks and sea resorts. The young people even got the same tattoos as a sign of mutual love, which they called "secret." Dominic Sherwood has a personal blog on Twitter, which has 500,000 readers. There are 1.4 million followers on the actor’s Instagram page. Now Dominic and Sarah live in Los Angeles, where they have a dog named Boo.

Christopher Lloyd and Steven Levitan’s sitcom has been broadcast on ABC since 2009. Sherwood's girlfriend Sarah Hyland played the role of the daughter of the title characters, Phil and Claire. The same year, the Freeform TV channel launched the series Shadowhunters, in which the actor got the leading role of Jace. The film was based on the book “The Mortal Instruments” written by Cassandra Clare.

In addition to Sherwood, Katherine McNamara, Alberto Rosende, Matthew Daddario, and Emeraude Toubia joined the main cast. The series drew the attention of viewers with a fantasy plot and modern filmmaking. In the spring of 2017, the creators decided to renew the series for the third season. On July 22, 2017, the film Vampire Academy premiered on Pyatnitsa! (Friday!) in Russia.