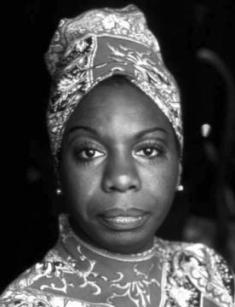 Ambiguous, bright, and impulsive, Nina Simone was a genuine star. The singer’s life was full of protest, tragedies, and light, sad compositions that continued to live after their creator’s death.

Eunice Kathleen Waymon was born into a large and poor family in North Caroline on February 21, 1933. The girl was the sixth among the eight children. Despite the low income, the family had an old piano; Eunice learned how to play it at the age of three. As it often happened in deprivileged neighborhoods, she began to perform the local church quire.

The young talent dreamed of becoming a pianist. At six, future Nina Simone started taking piano lessons, and her diligence and hard work brought the first achievements four years later: Eunice was given the honor to play at her own solo concert. Unfortunately, the child had to face racism in the first days of her triumph. The musician’s parents were not allowed to sit in the first row because they had to let a white couple do it. Waymon was insulted and refused to perform until her parents got their places. It was Nina Simone’s first step in her fight for black people’s rights.

The pianist was educated at the prestigious Juilliard School of Music in New York City. It was hardly possible for a black girl to achieve this level. To pay for her studies, Eunice had to work part-time as an accompanist for a vocal teacher.

In 1953, the young woman succeeded at the auditions and began to play in Atlantic City clubs. She invented the stage name “Nina Simone” in honor of her favorite actress, Simone Signoret. The pianist career did not work out: as soon as people heard her voice, they wanted her to be a singer. However, the queen of soul often accompanied herself on the piano at her concerts.

Nina Simone is one of the most fruitful artists ever: she presented 170 albums including studio and concert recordings and performed more than 320 songs.

The song “I Loves You, Porgy!” was the first work that the audience fancied. It was an aria from a George Gershwin’s opera interpreted by the singer. In 1957, the debut album Little Girl Blue came out and proved to be popular immediately: Simone’s emotional and touching jazz tracks conquered people’s hearts.

In the early 1960s, the woman started collaborating with Colpix. I965 was marked with the most popular album I Put a Spell on You with the legendary song under the same title and the great hit “Feeling Good”.

The black spiritual song “Sinnerman” from the album Pastel Blues is another outstanding work. It is among Barack Obama’s favorite compositions. The ten-minute opus continues to be popular today and sounds in modern movies and series: The Thomas Crown Affair, Miami Vice, Cellular, Lucifer, Sherlock, and others.

1966 brought the pop-soul album Wild is the Wind; the singer was called the priestess of the soul genre.

Nina’s social activism, particularly, her support of black people’s rights, manifested itself in her art. There are many references to this topic in the musician’s lyrics. For instance, the song “Mississippi Goddam” was clearly political”; it followed the murder of the civil rights activist Medgar Evers and the death of four black kids after an explosion at a school. The lyrics encouraged people to fight against racism openly:

“You don't have to live next to me, just give me my equality”.

Eventually, the musician said she could no longer live in the United States and left for Barbados; she moved to France later and resided there until her last days.

In 1970-1978, Nina Simone presented seven studio albums. 1993 brought the last one, A Single Woman. Although the singer continued to give rare concerts until the late 1990s, she never presented new studio works again.

Nina’s songs are recognized all over the world and remain authentic for the younger generation. Many musicians present cover versions on her tracks.

The woman married her first husband, a bartender Donald Ross, in 1958. They spent little time together; there is little information about their relationship. The celebrity avoided any talks about that period of her life.

The second husband, a former Harlem detective Andrew Stroud, played a significant part in her career and personal life. The couple married in 1961. Andrew was a bright and business-minded person; he left his job, became his wife’s manager, and controlled all her contracts.

As Nina revealed in her autobiography I Put a Spell on You, her husband was a despot who made her do a lot of exhausting work; face-slapping and simulators were normal. The singer said she would probably never make a star without those harsh methods, but she was not sure if it was worth it. There are many archive pictures of the spouses related to work.

In 1962, the artist’s daughter Lisa was born. She followed in her mother’s footsteps and began to perform on Broadway. Still, she is not as popular as Nina.

The decision to move to Barbados was partially determined by Simone’s divorce. The singer tried to organize everything on her own, but her management skills were not as good as her vocal talent. Nina never married again.

In 2015, the documentary What Happened, Miss Simone? by Liz Garbus was released. The director opened the different singer: the audience had never seen her like that. Relatives’ interviews and archive records presented Nina Simone as a complicated, ambiguous, and hot-tempered person who also suffered from her character.

In the 1990s, Nina Simone’s health deteriorated, so she could no longer participate in shows. According to documentaries, relatives, and doctors, the woman was diagnosed with bipolar disorder and, later, breast cancer.

In 2001, the star could not go to the Carnegie Hall stage without assistance; the next year and a half brought severe illnesses. In 2003, the celebrity died of oncology. She passed away in her sleep, in her house in southern France.

Nina Simone’s net worth was $5 million.