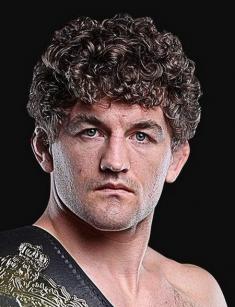 According to Sherdog portal, the MMA fighter Ben Askren is the tenth best athlete in the welterweight division. He is known for his grappling skills and combining elements from various martial arts.

Ben was born in summer 1984 in Hartland, Wisconsin; he went to school in his home town. The parents noticed the active child was attracted to sports and took him to a freestyle wrestling club.

Askren won his first victory at the championship of the state; he received a gold medal. The next two years, nobody could defeat the talented athlete; he remained the champion. The young man practiced hard and spent all the time in the gym; he continued to gain prizes in the United States.

Askren participated in the first significant competition at 24. He applied for the Summer Olympics and fought in the 74 kg. category. Although the athlete lost, wrestling fans noticed him: the tall young man with a muscular body moved better than other fighters and performed unusual elements.

After this failure, Askren decided to develop his MMA career. The young man debuted in February 2009 in Columbia, Missouri; he won at the beginning of the first round. The second fight against Mitchell Harris brought another victory.

In September 2009, Ben participated in the championship organized by ADCC in Barcelona. The first meeting with Toni Linden ended with Ben’s arm triangle choke. However, Askren lost to Pablo Popovitch.

Besides, the athlete won the 2009 FILA 2° World Grappling Championship held by the eldest grappling organization. He performed in the 84 kg. category and faced the previous-year champion Jacob Volkmann. The match was tense; Ben managed to win the victory.

In 2010, the sportsman participated in Bellator Fighting Championships Season 2. Thanks to the choke, Askren defeated Ryan Thomas. Further on, he fought against this athlete one more time, and the jury unanimously gave the prize to Ben. In October 2010, the man surpassed Lyman Good which made him the champion.

The next two years were marked with successful fights against Nick Thompson, Jay Hieron, and Douglas Lima. In 2013, with the early termination of the match, Ben defeated Karl Amoussou. The latter had a severe cut, and a doctor stopped the event.

The last fight in Bellator happened against the Russian MMA fighter Andrey Koreshkov in summer 2013; Askren won. After that, he signed an agreement for six matches with ONE Championship.

In May 2014, Askren faced Bakhtiyar Abbasov who had gained nine victories in a row before that. The loss to Ben was a blow for him. In summer, Askren fought against the ONE champion Nobutatsu Suzuki and won by a technical knockout. As a result, he got the champion belt and became the strongest welterweight athlete.

In 2015, Askren protected his title and fought Luis Santos. Soon after the match began, it was stopped: Ben’s opponent was hit in the eye and could no longer continue. The fight was ruled “no contest”.

In 2016, Askren faced Nikolay Aleksakhin and won; the jury’s decision was unanimous. May 2017 brought the victory over the Malaysian Agilan Thani. The same year was marked with several other victories; after that, Ben announced he finished his sports career and added he could return if he could work for the title of the world’s best fighter.

Although the fighter is often busy, his personal life is all right; he is married and has children. Judging by Instagram photos, the man has two daughters and a son; as for details, Ben avoids talking about it with followers or the media.

In October 2018, Askren answered a fan’s question and announced that he was close to signing a contract with the UFC.

The UFC representatives were preparing for the negotiations with the athlete in summer, but it was necessary to have the official document confirming that Ben had no current contracts with other MMA organizations. At that moment, the agreement with ONE FC had not expired, so there was nothing to do with the work for UFC.

Soon, Askren did transfer to UFC; the historical change of Demetrious Johnson for Ben Askren took place. Many people were looking forward to new spectacular fights.

The fight between Askren and Robbie Lawler was scheduled for the end of January 2019. As Ben learned the news, he said that he was made to face the ex-champion on purpose so that the newbie in UFC would lose. The fight took place in March 2019; Askren defeated Lawler by submission.