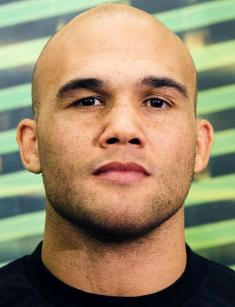 Robbi Lawler is an American mixed martial artist, the former UFC Welterweight Championship winner, and the participant of EliteXC, Strikeforce, PRIDE, and IFL. He is the only athlete who won Fight of the Year by Sherdog and MMA Fighting three times in a row. Lawler is a regular top sportsman in the UFC rankings.

Robert Glenn "Robbie" Lawler was born on March 20, 1982, in San Diego. His family had British and Filipino roots. The father served in the Marines, and his wife with two kids moved to Bettendorf, Iowa after him.

When the boy turned ten, the parents divorced; his elder brother looked after him mostly. Young Robert played baseball, basketball, and soccer; further on, he took an interest in martial arts and began to practice taekwondo.

As a middle-school student, Lawler frequently received prizes for his sports achievements. As the young man entered a college, he developed a keen interest in wrestling.

In 1998, Robert met the local Welterweight fighter Pat Miletich; the man saw the potential of the young athlete, not so tall (5.91 ft. or 180 cm.) but thickset (Robbie’s weight was some 170 lbs. (77 kg.). This meeting proved to be one of the most significant moments in Lawler’s career and opened the road to professional sport.

Robert followed the recommendations of the coach who owned Miletich Fighting Systems fight club and focused on mixed martial arts. He began to prepare for matches against strong opponents.

Lawler took the first steps when mixed martial arts were only getting popular. The young athlete was in good shape and mastered his techniques; he participated in fights every day. However, the coach insisted his mentee should rearrange his busy schedule and stop putting so much stress on his body; otherwise, his health could deteriorate.

In 2001, Lawler debuted in IFC and won the first four fights; his rivals were not particularly strong, though. In a while, the sportsman decided to challenge more powerful opponents. In 2002, the experienced fighters Aaron Riley, Steve Berger, and Tiki Ghosn faced Robbie and lost, unable to stand against the young man’s pressure.

On April 25, 2003, the American gave Lawler his first defeat at UFC 42: Sudden Impact in Miami. As the athletes were fighting, Robbie had a hip injury and could no longer continue.

In 2004, the sportsman transferred to the Middleweight class and lost in his debuting match to the would-be UFC Champion Evan Tanner. After that, Robbie quit the organization. However, Lawler did not leave the professional sport and won SuperBrawl: Icon soon as he stood against 31-year-old Falaniko Vitale. He also earned the King of the Cage title in Indianapolis.

The man continued to polish his skills: blow techniques and defense. In 2006, the sportsman became the ICON Sport Middleweight Champion and won PRIDE 32 and EliteXC tournaments as well. In a while, Robbie signed a contract with ProElite that promoted MMA and organized competitions; he collaborated with the company until 2009.

As long as EliteXC was closed, Robbie came to Strikeforce. Although he lost in his debuting fight, the athlete managed to pull himself together and knocked out the famous Surinamese Melvin Manhoef on January 30, 2010. Overall, Robbie took part in eight tournaments of the organization and won three victories; he defeated the Olympic champion Matt Lindland and the world record-breaker Adlan Amagov.

At the end of 2012, Robert left Pat Miletich’s club to move to Florida and come back to UFC as a Welterweight athlete. It was the right decision: when Lawler began to practice at American Top Team, he had the opportunity to co-work with highly-skilled opponents; as the man mentioned in his interviews, he developed as a person there.

In the past, Robbie used harsh punches in an opponent’s body and face; a ring often looked like a slaughterhouse. When Lawler joined American Top Team, he transformed into a calm, even-tempered man. 2013 brought no failure: Lawler defeated many famous athletes, such as Josh Koscheck, Bobby Voelker, and Rory MacDonald.

On March 15, 2014, Robbie was invited to fight for the vacant UFC Welterweight Championship. Johny Hendricks, one of the best MMA athletes, became his opponent. Lawler could not win in the close combat, and the jury gave the victory to Hendricks; Robbie got Fight of the Night, though. The sportsmen’s rematch happened in Las Vegas on December 6, 2014; it was the most important event at FC 181. At that time, the jury awarded the long-awaited victory to Robert.

2015-2016 were marked with the successful fights against Rory MacDonald and Carlos Condit; as a result, Lawler became the UFC champion. He kept the title until he met Tyron Woodley, the former Strikeforce partner. Besides, the athlete received Fighter of the Year and Fight of the Year.

In 2017, Robbie beat the kickboxer Donald Cerrone at UFC 214 and devoted his victory to famous Matt Hughes who had had a car accident not long before that. The next match against Rafael dos Anjos was a failure due to Lawler’s trauma: the torn leg ALC. Eventually, the athlete had to put off any competitions for a year.

Robbie Lawler is married to Marcia Suzanne Fritz; the couple has a son who was born soon after the wedding.

The sportsman keeps his personal life secret; he talks about his career in interviews, and his Instagram page is full of photos and videos from training.

Today, Lawler has recovered from injury and prepares for new matches. He lives with his family in Florida.

On March 2, 2019, Robbie lost to the UFC newcomer Ben Askren, the current ONE Fighting Champion and the former Bellator Champion, at UFC 235. The event took place at T-Mobile Arena in Las Vegas, Nevada.