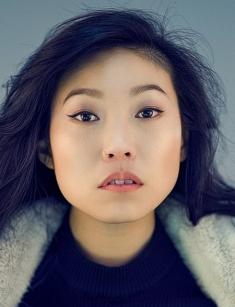 Awkwafina – an American TV star, an actress, a rap singer and a comedian. She gained popularity in 2012, after the release of the song "My Vag". The video for the song gained millions of views on YouTube. The girl proved herself as an actress in such films as "Dude", "Ocean's Eight", "Crazy Rich Asians".

Nora Lum (real name Awkwafina) was born on June 2, 1988, in New York. She has a mixed origin. Her father is Chinese-American, and her mother is an immigrant from South Korea. Awkwafina's great-grandfather moved from China to America in the 1940s to open a Cantonese restaurant in Queens.

The future celebrity lived in one of the best areas of the city Forest Hills with her grandmother, who had a significant influence on Nora during her growing. The girl's mother died when the child was four years old.

Nora went to the famous Fiorello H. LaGuardia High School in Manhattan. In addition to her interest in studying, she also showed a great attraction to music. The girl learned to play the trumpet, and she studied jazz and classical music.

Later, she graduated from the State University of New York at Albany with degrees in Journalism and Women's Studies. In 2006, she went to China to study a Mandarin dialect at the Beijing Language and Culture University. The girl returned to New York in 2008 and began to work as a trainee at the Gotham Gazette and then at the Times Union.

Later, she worked as an advertising assistant at Rodale Books, which is a part of the well-known Crown Publishing Group. Nora was interested in literature and began reading the works of Charles Bukowski, Joan Didion and Anaïs Nin when she worked at Rodale Books. She was influenced by such musicians as Chet Baker and Tom Waits.

Nora Lum came up with her stage name as a teenager. Awkwafina's alter-ego was created to fight with the quiet and passive nature of Nora.

Although Nora studied jazz and classical music at school, she loved rap and began performing it at the age of 13. However, the musical knowledge she mastered at school was not in vain - the debut song "My Vag" contained some elements of jazz.

The official music video for the song was released on October 11, 2012. It became a massive hit as it collected several millions of views on YouTube. Later, Awkwafina released her solo album "Yellow Ranger" on February 11, 2014.

Awkwafina was famous as the rapper who adds comedy to her music. In 2014, she participated in the Supreme Supreme festival dedicated to comedy music. The popular comedy rock duo organized the event Tenacious D. Awkwafina joined her forces with the famous comedian Margaret Cho in 2016and wrote the song called "Green Tea," in which she raised the theme of stereotypes about Asians.

In 2014, Nora was included in the cast of the famous American comedy television series "Girl Code", in which she played herself. She showed her acting skills well, starring in 6 episodes of the 3rd season. Next year, the girl had the opportunity to become a co-host of the entertainment talk show Girl Code Live on MTV with Nessa and Carly Aquilino.

In 2015, Nora Lum's filmography was colored by her participation in the documentary "Bad Rap", which was about Awkwafina and other Asian rappers such as Lyricks, Rekstizzy and Dumbfoundead.

In 2016, Awkwafina received the role of Rebecca in Olivia Milch's directorial debut "Dude." The Netflix company released the dramatic comedy on April 20, 2018. Then the actress played Christine in the American comedy film " Neighbors 2: Sorority Rising "and voiced one of the characters in the cartoon "Storks." She voiced the character of the famous animated sitcom "Regular Show" the same year.

In 2017, Awkwafina played an episodic role in the fantastic series "Future Man". In 2018, the actress appeared in the action movie "Ocean's Eight", which is a by-product of the trilogy of Danny Ocean. The girl also took part in the filming of the melodrama "Crazy Rich Asians", released by Warner Bros. Pictures.

In 2019, it is planned to release the thriller o the science fiction Alice Waddington "Paradise Hills", in which Awkwafina will play a key role. Now we are actively working on the filming of the film.

The girl condemns the act of stereotypical perception of Asians in the entertainment industry. She rejected many of the actor's proposals, as it was required to speak with a specific accent. Along with expressing support for the anti-sexual harassment movement, Nora also encourages her fans to fight harassment in the entertainment industry. Nora said in one of her interviews that she is proud to represent Asian people.

The singer and the actress prefers not to extend about her personal life but you can conclude that Awkwafina has not children and a husband when you see her tweets and photo captions on Instagram.

On June 8, 2018, she released the EP "In Fina We Trust." Also, the rapper released her second studio album at the end of the year.

Awkwafina performed leading in the second episode of the forty-fourth season in the evening musical-comedy program Saturday Night Live. In her opening monologue, the girl noted that she was inspired by actress Lucy Liu, who became a leading SNL almost two decades ago. Awkwafina became the second Asian after Liu, who was entrusted to lead the program.

In 2019, the creative biography of the actress will be supplemented by another cartoon project, a comedy cartoon "The Angry Birds Movie 2", in which Awkwafina voiced one of the characters.