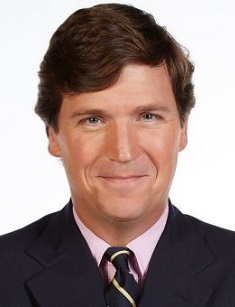 If you don’t know him, it means that you are not interested in policy, not even a little. As a journalist, Tucker Carlson (age 49) has a rich history. And though it is still continuing. Let’s check the existing part of his exciting story.

You can have a different attitude towards him, to be good for him or not, agree with his views or not. But he certainly becomes a significant figure that leads people or pushes them away but leaves no one indifferent. Whatever he says, there will always be those who disagree and those who approve of his position.

Fearless he criticizes important politicians and influential people if he does not agree with their point of view and conveys his own opinion without looking at anyone. What is important for modern society, he is able to admit his mistakes and change attitudes towards various issues.

Let’s discuss and take his bio apart piece by piece.

Mr.Tucker was born on May 16, 1969, and all his childhood was spent in California. His hometown is San Fransisco, but then his family lived in Studio City (a neighbourhood in Los Angeles). The journalist has a family of 4 – his father, Richard Carlson (former USA ambassador in Seychelles), his mother, Lisa Lombardi and a younger brother, Buckley Carlson. The family history is not so happy; the boy was motherless while she was alive. Lisa left her family when her son was 6. He has a stepmother since 10. His father Richard got married to Patricia Swanson and she became his stepmother.

After finishing school Carlson entered Trinity College and studying history in Connecticut which he graduated in 1992.

Tucker Carlson net worth exceeds $16 million. He is an iconic figure on the TV scene. Tucker Carlson is well-known as a famous, influential and high-powered writer, a political analyst, no longer a columnist and a commentator, but a participant of American policy and sceptic of everything concerning climate changing in the US. At present, he became a lead anchor of the Fox News, holding his own nightly political chat show on TV – he is a presenter of the Tucker Carlson Tonight.

Since 2016 he and his quests debate great and essential issues whether connecting policy or not. Now he has dizzying advances as not everyone has their own show named for him. He has started his career in journalism since the nineties. Since he was young he was interested in politics and society. The famous journalist was writing for various famous and not-so-famous publications. Also for a while, he worked for CNN as a commentator in the early 2000s followed by works as a co-host of Crossfire (a nightly debate show), a host of a TV show at night on MSNBC.

He created a political opinion and news portal called The Daily Caller and was the initial editor-in-chief in it. He developed the site with Patel in 2010. After the launching became very significant political press.

Combining his journalist jobs he wrote 2 books about politics and society, the first one in 2003 and the second one in 2018. Soon he will be an author of one more likely political book.

In 2006 he took part in reality TV show Dancing with the stars on ABC. He danced with Elena Grinenko and took the 11th place.

The career of Carlson is very successful and rapid, but all this success was earned hard. Numerous magazines and newspapers regarding politics published his articles. He was a member of New York, Reader’s Digest, Esquire and many other influential editions all over the States. The writing was interested him but he always wanted something more, becoming a television journalist. He had always tried to make his dreams come true and finally, he took his place in 2000. He served as a co-host of The Spin Room show. This show didn’t last very long on TV. To be himself he had come a long way. At his age, almost no one can overcome various difficulties faced in TV and succeed.

His wife, born Susan Andrews, came into his life in 1991. Now they have 4 children – three daughters (Dorothy, Hopie, Lili) and a son (Buckley). Concerning religious, he belongs to the Episcopal Church.

His job is connected with his personal political views. He is well-known for his conservatism. Even if he supports conservative economics, he considers that nowadays any changes in economics and technology that moves very fast can shake society and become a cause for dramatic aftermath.

In his past he was a libertarian, but now Carlson is a committed conservative. This fact crosses all his social and political views.

He is most noted for his critical commentaries on John McCain’s lack of commitment to the ideology, George W. Bush’s lack of conservatism and even his own discontent to the president and so on. In 2004 Tucker Carlson expressed his civic attitudes and avoided the presidential election because of the disdain for war and violence in Iraq.

Сonservative assumptions are reflected in:

In this part we will discuss some of his views concerning politics and not only.

Whereas the hosts a program where he can expose his own views we know about them a lot. With regard to international intervention, his views formed after the situation with Iraq. He supported the war during its 1st year, but then, as he was saying, he was ashamed of his own support, because this war was horrible.

He is not the supporter of the idea that Russia has intervened in the presidential election in The United States. Equally, he is for cooperation with the Russian Federation and doesn’t consider that they are an obvious threat to American security.

Tucker Carlson opposes the overthrow of Bashar al-Assad and in general, is for support for Syria. Likewise, categorical he conveys his negative attitude towards immigration, regardless of legal or illegal. Other journalists from such media as The Washington Post or Vox accused Carlson of irrational opposition against immigrants. He claims that they have caused major dramatic changes in American demography, and if the United States can’t control immigration it will lead to more dangerous problems. He holds up as a model the demographic situation in Hazleton, where Latin Americans are becoming the majority, crowding out the indigenous population. Carlson’s position is that the immigrants «contaminate» the country.

As a strong supporter of libertarianism for many years, since the beginning of 2019, he began to roundly criticise this policy. He claimed that it’s right to deviate from the economic situation when everybody prays on market capitalism like a god. This is incorrect and will lead to bad afterwards. He considers that it will lead to class domination. «Ruling class» lies behind the degradation of «middle class».

Throughout the years Carlson’s trademark was wearing bow ties. Up to 2014 he didn’t change this habit, but then returned to wearing an ordinary tie, to become ordinary, in his own words. In 2017 there appeared news that claimed he was injured and then died in a car accident but this was a fake.

In 2018 near his house there was a protest where Antifa expressed their position and threatened his family security. It got to the point where his wife called the police.

All his programs, speaking out and interviews one can find on Youtube.

Tucker Carlson hosts his own chat show on Fox News which is broadcast at night. Since November 2016, it has been about a part of people who want to know politics and foreign and home news.

He is a climate-change denier. He calls into question every scientific fact concerning the ecological problem connecting with global warming or something. Among his guests, there was Bill Nye, one of those the journalist confronted with on the subject.

His show is translated into multiple languages, his views are heard everywhere. He is a man of some weight among various people.

At present time, he is a writer of two books «My Adventures in Cable News» and a book about a Selfish Ruling Class. The first one became his revelations and experiences. In this book he described his career and various events that mattered to him. It was published in 2003.

In 2018 he published the second book and this brought him to the top in The New York Times Bestseller List. This non-fiction political book is an expression of his view concerning American classes and his attitude towards them. This book hits the «ruling and middle class» problem, which is considered a threat to the American economy. It was printed in 2018 and now it is №1 under the version of New York Times.

“Ship” is the metaphor with meaning which Carlson wanted to give to the idea of his book. This is Plato’s analogy of a boat with stupid people. It’s the symbol of the pursuit of material wealth.

Since Tucker signed a two-book contract with Simon & Schuster's publisher, we expect at least one more journalist’s book in the short term.