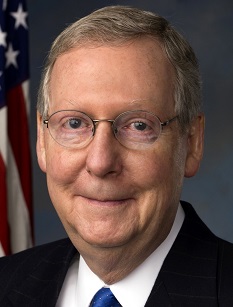 He is a skilled political leader who stands from the other political figures with fixed points of view and commitment. He is a dedicated republican and is absolutely sure in his values, several times he became a chief critic of administrations.

He was born in Alabama in 1942. The boy had a tough childhood. At the age of two, he suffered from a polio attack. As a result, his upper left leg was severely injured. Only acute medical treatment, which he got un the Institute un Georgia, saved him from being paralyzed for the rest of his life. The politician mentioned this part of his life as one of the most difficult both for him and his family members because his parents met substantial financial difficulties related to the costs for his treatment.

His father was a military man, and his family had to move from place to place during his early ages. At school, Mitch displayed excellent pieces of knowledge and the leader's nature. He was elected the council president at high school. He graduated from the university with a bachelor's degree in Louisville in 1964. He had maintened the relationships with his alma-mater during all his life. His ancestors moved to Ireland to the USA, that's why the politician had the British and Irish roots.

His path to success as a political leader proved to be very prolific. Nevertheless, his bio contents several controversies which were widely discussed. He started his political career at the age of 22 when he became an intern for the senator. He worked with John Sherman Cooper, and this experience inspired him to pursue his career in politics. He continued to study political science and law in Kentucky, and in 1967, he graduated from it with a new degree.

In 1967 he was included in the list of the American Army Reserve. But his service was soon abrupted, as the young man suffered optic neuritis, and was deemed as medically unfit. He was quickly discharged. This part of his history didn't adorn his biography and repeatedly became the issue of discussion of his political opponents.

Nest years he worked as an aide for the other senator, he took on himself managing functions, as well as writing speeches. This period he also worked as a lawyer in the firms and taught political science at the university.

In 1974 he got a significant promotion when he began serving as a member of the cabinet of Gerald Ford.

He is a Republican who was chief critic and opponent of Obama's administration. He applied for aggressive political maneuverings - bstructionism and constitutional hardball - for several times and was criticized by political scientists and historians. Nevertheless he gained the reputation of skilled politician and tactician. In 2015 he was included in the list of the most influential people by Time.

In 2019 he loudly criticized the ideas of single-payer healthcare and the Green New Deal. He stated that "none of those things are going to pass the Senate. They won't even be voted on. So think of me as the Grim Reaper. None of that stuff is going to pass. None of it." Nancy Pelosi criticized his announcements and released the vivid poster "McConnell's graveyard," where she underlines that the senator is going to bury many significant initiatives.

The senator commented on this poster as "absolutely right."

During the election, the politician supported his fellow senator from Kentucky. After his withdrawal, he endorsed Donald Trump. Being unsatisfied with the work of the government during Obama's reign, he hoped to reform many bills, especially his initiative Obamacare.

Later, he disagreed with him in many questions. Especially Trump's critic of political figures, women, shoulders, and victims who sometimes was rather rude. He supported the investigation of the influence of Russians on election results.

In recent years the senator became a vivid critic of Trump's administration. In October 2019, the president decided to withdraw troops from Syria. This decision was called a "strategic nightmare" by the senator.

The senator stalled the passage of bipartisan criminal justice reform at the end of 2018. But he endorsed the bill concerning sentencing and prison reform in December 2018. Trump supported the bill and commented: "Excellent Criminal Justice Reform has a true shot at major bipartisan support ... Would be a major victory for ALL".

He proved to be a popular political figure whose ideas are widely supported by the people. He is one of the most effective fundraisers. His list of donors included various firms and corporations. As a senate majority leader, he gained the largest donation, which is more than $1,5 million.

The political figure was married twice. He had three children from his first marriage with Sherill Redmon, which lasted from 1968 to 1980. He married again in 1993 on the secretary who served under several presidents. His wife's name is Elaine Chao. In 2003 he underwent surgery on the heart. He is regarded as one of the wealthiest people in the Senate, his net worth is estimated at 22,5 $million. The politician is active on Twitter.

In summer 2019, he had an accident at his house when he fell and broke his shoulder. On the 5th of October 2019, it was reported that one of his daughters didn't support the initiative of the father concerning pushing though the vote on Brett Kavanaugh, a supreme court justice. His daughter, Porter, called this action "misogony."