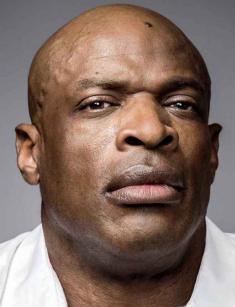 Ronnie Coleman belongs to a galaxy of great American bodybuilders. The owner of phenomenal anthropometric data improved by persistent trainings; Big Ronnie is the winner of Mr. Olympia title for eight years in a row and also won other status competitions held by the International Federation of Bodybuilding.

Ronald Dean Coleman was born on May 13, 1964, in the U.S. state of Louisiana. His mother almost lost her life, producing a future champion. The large baby grew up not on days and on hours. Ronnie weighed about 176 lbs (80 kg) and reached a growth of 70 feet (180 cm) at the age of 12. Such physical data determined the fate of a boy from early childhood who was engaged in sports.

Starting with basketball and baseball, Coleman soon was engaged in American football. After three years after entering the school team, Ronald was in the first team and became the leading player of the club, who participated in the Super Cup competitions.

Growing up, the young man left the training on the field, considering the team kind of sports traumatic and he went to Grambling State University to study Accounting. In 1986, Ronnie received a bachelor's degree and began to earn a living in a network of Italian pizzerias. However, mathematics was not a vocation for a potential athlete and Ron changed the calculator to a policeman's cap and began his career as a police officer.

Police service required constant physical trainings and Coleman began to go to the gym "Metroflex," where instead of modern simulators were rusty bars and primitive dumbbells. The owner of the gym Brian Dobson immediately paid attention to the impressive form of Ron and he was personally engaged in the preparation of the future champion.

Coleman did not immediately believe in the opportunity to become a bodybuilding star but he did not refuse from a free ticket gym and professional coaching. The police had the right shape after seven months and won the contest "Mr. Texas" in 1990 and he won the title at the national American World Heavyweight Championship and the title of world champion in the same category two years later.

Coleman began to compete at the Amateur level. He received a professional athlete's card in 1992 after winning the title of absolute world champion at the tournament in Warsaw. Not stopping there, Ronnie began hunting for the most prestigious award of bodybuilders, the title of "Mr. Olympia."

Coleman's training program was extremely simple and as intense as possible. It consisted of power and pitching cycles and was supplemented with aerobic loads. Ronnie paid particular attention to the legs, alternating work with heavy and light weights, rocking the muscles of the back and torso. This technique allowed keeping the body in good shape and avoiding injuries associated with tissue rupture and damage to the joints.

As a result, Coleman had his body in perfect proportions. He gained muscle mass, weighed (138 kg) and continued to lift weights until his muscles did not achieve the desired volume 60 cm and he was 70 feet (180 cm) tall. Ronnie first appeared on the world famous tournament in such form but did not win. Bodybuilder annually went to the podium, competing with talented and well-known rivals not losing his presence of mind and faith in his strength.

He showed steel muscles of arms, legs and back, taking spectacular poses and appearing before the judges in different angles and he achieved recognition and a long-awaited victory in 1998. Since then, luck did not change Coleman, over the next eight years, he held the title of "Mr. Olympia," breaking the record, owned by Arnold Schwarzenegger. Besides, Ronnie participated in various competitions of bodybuilders in the offseason and regularly added no less prestigious trophies to the title of "king."

The famous bodybuilder was a multiple winner of the Grand Prix of Russia, Finland, Germany, England, Holland and New Zealand and also took the highest awards at the World Professional Championships in 1999 and 2000.

The irreconcilable rival of Ronnie for many years was the American bodybuilder from Massachusetts Jay Cutler who took away a victory from the champion of tournament in final "Mr. Olympia" in 2006. Coleman, who received a back injury, took 2nd place. Big Ron's winning streak ended and the athlete announced his intention to end his career as a bodybuilder in 2007.

In 2010, Ronnie tried to return to the sport and again take part in the main world competition but did not get the right shape and did not pass the qualifying competition. After that, Coleman began to be criticized by experts and fans who considered the age of the athlete unsuitable for participation in world-class tournaments. The athlete himself had another opinion and continued to work in the gym, to which he became attached in his youth.

After undergoing many operations on the spine and hip joints, Ronnie retained his presence of mind and offered Cutler to hold a full-time competition for the title of the best bodybuilder of the planet in 2016 but he was refused. Nevertheless, the opponents met not on the sports podium and they met on the set of the film biography Ronnie Coleman: The King, released in 2018.

At the beginning of his sports career, Coleman met with the bodybuilder Vickie Gates, who helped the athlete in the process of training and supported in competitions. The breakup followed immediately after the loss of the title Mr. Universe and it struck a blow to the personal life of a bodybuilder.

In 2007, Ronnie married Rouaida Christine Achkar who gave birth to her husband two children, daughters Jamilleah and Valencia Daniel. This marriage was not happy and the couple soon divorced.

The third wife of Coleman in 2016 was a long-time friend Susan Williamson, who was a former personal coach of the athlete. Now Susan and Ronnie are a happy couple with many children.

In the autumn of 2018, Ronnie shared with journalists the news about his health. The athlete was afraid that he could spend in a wheelchair the rest of the days because of problems with a spine. The recent operations, which cost Coleman $2 million were not successful and instead of the desired relief caused irreparable harm to the health of the famous bodybuilder.

However, there was a refutation of this information from the author of the film about the king of bodybuilding Vlad Yudin and from Coleman, who published several photos with his cardio training on Instagram.

Now Ronnie closely monitors the achievements of young bodybuilders. Of particular interest to the athlete is the seven-time "Mr. Olympia" Phillip Heath. Coleman is looking forward to the 2019 tournament, which will determine who will be the champion and recognize the king of bodybuilding in near future.