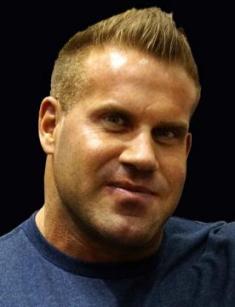 Jay Cutler is a professional bodybuilder who became famous at the fourth tournament in his life. Nature gave the man good abilities, and he developed them successfully thanks to well-organized training and herculean efforts in the gym.

Jay Cutler was born in Sterling, Massachusetts, on August 3, 1973. His parents were farmers, and the future bodybuilder got used to physical activities early. The boy’s brother was a construction worker and encouraged him to help; thus, Cutler could lift heavy weights as a teenager.

The strong young man was popular at school; he was fond of football and considered it as a career. However, Jay changed his mind later. In 1991, he graduated from school to study criminal justice at Quinsigamond Community College.

Cutler began to train seriously after 18. Bodybuilding became his interest by change: his sister’s boyfriend collected sports magazines, and the young man saw it one day. The professional bodybuilding world admitted Jay, so he went to the gym to look like cover boys.

The newbie was determined to work hard but made some typical mistakes: he overloaded himself with hours of training and exhausting exercises. Still, no particular results were achieved. Thus, the young man decided to take a different approach. He asked around experienced athletes, read a vast body of literature, and created a well-though training program; Cutler was thoroughly analyzing his successes and failures. It was an advantageous strategy. Thus, 20-year-old Cutler performed at juniors’ NPC Iron Bodies Invitational and became its champion.

In 1995, the bodybuilder won the NPC U.S. Tournament of Champions – Men’s Middleweight and Overall. He was recommended to begin a professional career. Jury’s compliments and personal goal-orienteers inspired Cutler to go to California.

The young man dreamed of joining the famous athletes’ circle but got disappointed. He did not like their lifestyle and training. Jay did not make any friends and had nobody to share secrets with. As a result, he returned home for independent work.

Following two years of persistent training, Cutler gained the gold at the national championship among amateurs and earned the IFBB professional card. Jay threw himself to practice with a vengeance and kept the diet; he did not distract himself with romances. At the end of the 1990s, the nutrition and bodybuilding expert Chris Aceto became the young man’s mentor.

In 2000, when Cutler won the IFBB Night of Champions, he had to move to California again: the local climate was more beneficial for training. Besides, there were much more opportunities to appear in the professional media and earn money, advertising sports clothes, nutrition, and exercise machines. Jay settled in Lake Forest in the south of the state.

Further on, things were improving even faster. Cutler increased his competition weight from 113 to 120 kg., took medal places at Mr. Olympia and Arnold Schwarzenegger Classic, and placed second at the IFBB rating after Ronnie Coleman.

The athlete dreamed of the Mr. Olympia title, but he could not surpass his primary opponent, Ronnie Coleman, for a long time. As soon as Jay solved his financial problems by the permanent contract with Muscle Tech, he occupied himself with more training. As a result, the man won the long-awaited award in 2006. Later, Cutler won the same title three more times and replaced the former favorite for good.

The sportsman wanted to give his knowledge to someone. In 2003, he began to patronize the young and promising athlete Phil Heath who gained the gold in his first amateurish tournament. It took Cutler three years to make Heath a famous professional. The student surpassed his teacher five years later and stripped him of the title of the top bodybuilder. Although Cutler made himself a strong opponent, he felt happy as a coach.

Young Jay’s weight used to be 275.5 lbs. (125 kg.); his height was 5.74 feet (175 cm.). To keep his muscle weight, the man had to eat much: 4000-6000 kcal daily. Cutler often cooked and took a lunch box everywhere; he consumed food up to seven times per day. The bodybuilder complained that eating was a hard job for him, and he had had no favorite dishes for a long time.

At that period, Jay’s individual program implied from two to four days of training and a day or two for rest. Every training session lasted from 45 minutes to three hours; Jay did exercise for various sets of muscles. According to the athlete, his burn fat implied only changes in his eating regime.

Jay Cutler finished his professional career in 2013 due to his age and the desire to spend more time on business and family.

Jay Cutler married the TV personality Kristin Cavallari in 2013. According to the athlete, his wife always supports and inspires him. The couple has three kids: Jaxon, Saylor, and Camden.

As the man told journalists, his hobby was to collect shorts footwear. Besides, Jay loves the sauna: it is a wonderful means to restore one’s strength.

Although the man finished his career, he continues to train and keep fit today. Jay has his own YouTube channel and Instagram page: one can see motivational videos and photos there, as well as the secrets of the bodybuilder’s success.