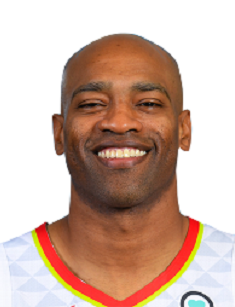 The Daytona Beach native, Vincent Carter started a basketball career in NBA in 1998 as a rookie of Toronto Raptors. He became the best rookie in the league that year. Over the years, Carter was playing for Raptors, Nets, Magic, Suns, Mavericks, Grizzlies, Kings and Hawks. The 2019 – 2020 is the last in the player’s career and his 22nd season. The player represented the national team of the USA and became the Olympic champion. His positions are a small forward and shooting guard. Also, Vince has a wife and two kids from different women. His net worth is roughly estimated at $65 million, including all of his properties and earnings.

The birthplace of Vince was Daytona Beach. He was born there on January 26, 1977. He had two brothers and a sister. At the age of seven, Vince’s parents divorced. Soon his mother married again. From an early age, Vince was involved in sport. He spent time playing basketball and volleyball. However, his mother, Michelle, and stepfather, Harry, wanted to develop their son in different areas and carried Vince away with music.

Vince studied at the Mainland High School. When he reached the seventh grade, he was a school star. He was a captain of the volleyball school team and shocked the peers with outstanding dunks in basketball games. At the same time, young talent could play various musical instruments, for example the baritone, the alto, and tenor saxophone. After joining the local music band, Vince went to band camp and wrote a song for school orchestra.

During school years, Vince achieved the greatest success in basketball. He led Mainland to the state Class 6A Championship for the first time in 56 years. He was named to the best school graduates’ team in 1995. Carter was highly ranked by ESPN and Rivals. He even received an offer of a college scholarship to Bethune-Cookman College. However, he entered the University of North Carolina and joined Tar Heels.

Leading the Atlantic Coast Conference in shooting, Carter reached with the college team the NCAA Final Four in 1997and 1998. As both Carter’s parents were teachers, he didn’t use college as a stepping stone to the NBA. Apart from other basketball talents, he took his studies very seriously. Carter’s mother forced him to sign a contract stating that if he were to leave college early in pursuit of NBA glory, he would go back to school and graduate.

In May 1998, Carter joined classmate and national player of the year Antawn Jamison in making himself eligible for the upcoming NBA Draft. In his public announcement, Vince said:

“The team had a great time, and we’re all very close, and we played well together on the floor, but sometimes you have to be selfish and say, ‘What’s good for Vince?”

The rising star kept his promise and continued his studies at the University. He graduated in 2000, being an NBA player.

The Golden State Warriors selected Carter by the fifth number at the 1998 NBA Draft. However, the club traded him to Toronto Raptors for his former Tar Heels’ teammate, Jamison. The rookie season started for Carter only in January 1999, because of NBA lockout. Right that month, the sides could find the agreement and signed a three-year $6.45 million contract. There was no doubt that Raptors won from the June exchange.

Debuting in the NBA's lockout-shortened season, Carter became a fan favorite from his debut games. He was outstanding in the offense. He won rookie of the year honors after averaging 18.3 points and throwing down countless highlight-reel dunks. Next season Vince improved his stats and playing and was named to All-Star Game.

That weekend he became the winner of the Slam Dunk Contest. His performance was one of the best in NBA History, and Carter established himself as one of the best dunkers ever. One of two most memorable dunks happened right then. His elbow-in-the-rim slam dubbed the Honey Dip locked up the 2000 contest.

Carter stood at 6’6” with a wingspan of 6’11”, helping him to get his head about one inch above the rim in his prime. When the springs in his legs were still shiny and new, he boasted a 43” vertical leap, and at times it might have been even higher. Carter spent all regular games in season 1999-2000, the only time in his career.

After his second All-Star selection and first Raptors’ playoff win in 2001, the club offered Carter to exercise his rookie scale. On August 1, 2001, the sides signed a six-year $85 million deal. The season started good, Vince started 60 regular games, but then he got injured, missed the All-Star game and the rest of the year. He couldn’t return to the beginning of next year and was available for only 43 regular games.

The management of Raptors was disappointed by its results in the 2003 - 2004 season and there happened serious changes in the structure and roster of the club. Carter didn’t find the agreement with new heads and was not included in the list of players for potential contenders. In December, Raptors traded dunk-master to New Jersey Nets for Alonzo Mourning, Aaron Williams, Eric Williams, a 2005 1st round pick, and a 2006 1st round pick.

Next five seasons, Vince played for Nets, missing only 11 games in full four years and showing great stats. He didn't care who he played for and continued leading his club to playoffs. In 2004 – 2007, Carter was named to All-Star game and made eight appearances in his career. Made nine three-point field goals in a single game and scored 2070 points in season 2006-2007, Carter wrote his name in the Nets Record Book.

Over the next years, Daytona Beach native became the guest of five various teams. He stayed in Orlando and reached the Conference Finals in Phoenix, in Dallas, in Memphis, Sacramento, and Atlanta. By the season 2018-2019, Vince had reached 24 000 career points, 6 000 rebounds, and 1 000 steals. He continued to rewrite aged records.

Carter’s current team is the Atlanta Hawks. On October 17, 2019, Vince Carter announced he would make history the upcoming season. With one game that year, he would become the first player in NBA history to play in four different decades. However, the 42-year-old Carter’s goals were bigger than just one game. He wanted appear in all 82 regular games, although he did the same only once in his career.

That was a lofty goal even for players with 1569 NBA regular season and postseason games’ worth of wear on their tires. The only player to achieve the feat over the age of 40 was John Stockton in 2002-03. In September 2019, Carter signed a one-year $2.5 million contract with the Atlanta Hawks, including $2.5 million guaranteed, and an annual average salary of $2.5 million.

At the 2000 Summer Olympics in Sydney, Vince Carter pulled off the Dunk of Death, when he jumped over 7-foot-2 French center, Frédéric Weis. The USA won gold medal in that tournament. Carter was team’s scoring leader with 14.8 points on average per game. In 2003, he played for national team again when he replaced Kobe Bryant in 2003 FIBA AmeriCup. The team won again. Vince missed the 2004 Summer Olympics, because of his marriage.

Vince Carter signed a lot of endorsements deals. He signed with Puma upon joining the NBA. Wearing the Puma Cell Origin Mid, Carter immediately made a name for himself as a high-flying dunker. But soon after the beginning of NBA career, Carter broke the Puma contract and signed a new deal with Nike. That agreement would last until his retirement.

Carter wore an interesting variety of shoes on the court. Perhaps most famously, he donned the And1 Tai Chi for his epic 2000 slam dunk competition. After signing with Nike, Carter became the face of the brand’s Shox line. He initially wore the Shox BB4s, before debuting a successful line of shoes with the Nike Shox VC.

Apart from the NBA career, Vincent also takes great pride in his work off the court through his Embassy of Hope Foundation, assisting children and their families in his home state of Florida and his home state of New Jersey. Carter established his foundation in 1998 when he was drafted into the NBA. The Embassy of Hope’s slogan, “Believing in Your Dreams,” represents Vince’s approach to success, while encouraging others who may be less fortunate to see that they too can be a winner.

Also, Vince is the President of Visions In Flight, Inc., a for-profit corporation, and Embassy of Hope Foundation, Inc., a non-profit charity. Vince’s efforts to improve the quality of life for parents and their children were recognized by the Children’s Home Society prompting the organization to name him the 2000 “Child Advocate-of-the-Year.”

In February 2004, the younger brother of Vince Carter was charged with drug possession. Police said they found marijuana and cocaine on Christopher Allen Carter's possession. Carter was released on $1,500 US bail. According to Daytona Beach News-Journal, Vince’s brother had a checkered past. He had several drug-related felony convictions, including one for smuggling contraband into a detention facility.

Vince was married in 2004 – 2006. His ex-wife was Ellen Rucker, and they welcomed a daughter, Kai Michelle Carter. Currently, his wife is Sondi Carter. The couple bring up their son together.