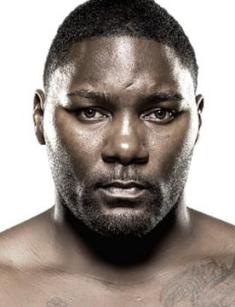 Before Anthony Johnson retired, he was one of the most frightening and aggressive UFC fighters in the light heavyweight division. The athlete was nicknamed Rumble due to his harsh knockout technique that helped him floor even the die-hard opponents: Alexander Gustafsson, Jimi Manuwa, Mike Kyle, and others.

Anthony Kewoa Johnson was born on March 6, 1984, in Dublin, Georgia. The boy’s childhood was challenging from the beginning: the parents actually abandoned the kid, and the grandparents started taking care of Anthony. In 1986, they became his legal guardians. The grandfather and the football player Walter Payton became the role models for Johnson.

The boy attended West Laurens High School and then won a sports scholarship at Lassen College. This is where the athlete received his first title, the wrestling champion among juniors.

The young man’s bodily constitution was impressive: 205 lbs. (93 kg.) and 6.17 feet (188 cm.). Johnson started working as a nightclub bouncer after graduation. When Anthony was 20, his friend suggested he should practice mixed martial arts on the professional level, and the young man agreed.

Rigorous training and specific diet made Anthony Johnson a technically skilled and exact fighter. He debuted in August 2006 against Jonathan Romero and knocked out his opponent at the second minute of the first round.

The following whitewash matches were beneficial for the sportsman: in less than a year, he joined the UFC and faced Chad Reiner. 13 seconds after the beginning, Rumble won. The audience was pretty shocked: Johnson accepted the fight in less than a week when he replaced injured Steve Bruno.

The further performance was not steady: the failure against Rich Clementi, the victory over Tom Speer, the defeat and consecutive victory over Kevin Burns. The later match brought Anthony the Knockout of The Night and $25 000.

Johnson had put on some weight when he competed against the Japanese judo player Yoshiyuki Yoshida; it proved to be advantageous for the athlete and brought another victory. The next month, without a proper rest period, Rumble fought against Josh Koscheck and, naturally, lost. Their stand was awarded Fight of the Night.

Later on, Johnson had a long break in his career because of the knee injury. Antony considered switching to the middleweight category to reduce leg pressure, but he decided to stay his ground. In 2011, the man came back and defeated Dan Hardy and Charlie Brenneman but lost to Vitor Belfort with the rear-naked choke. The event took place on January 14, 2012, and marked the finish of the UFC career.

Johnson found himself in Titan Fighting Championships (TFC). The match against David Branch was notable for another catchweight; it was the sportsman’s fourth violation of rules. Despite the weight domination, Johnson managed to get the victory only by the jury’s decision.

The meeting with David Branch opened a line of success. Rumble defeated Esteves Jones, Mike Kyle, Phil Davis, Antônio Rogério Nogueira, and Alexander Gustafsson. The Belarusian Andrei Arlovski and the American Phil Davis attempted to strike back, yet the jury’s decisions were in Anthony’s favor.

February 2014 brought the news: Johnson returned to the UFC for four fights; in fact, he stayed there longer. The chain of victories was interrupted by the personal issues: Anthony was accused of home violence. The man’s performances were stopped until November.

In May 2015, the athlete was supposed to face Jon Jones. However, the UFC champion had caused a car accident a month before and got suspended for an unknown period. Daniel Cormier changed him and defeated Anthony by a rear-naked choke.

The second failure to become the UFC champion made Johnson announce that he finished his career. He mentioned in his interviews that he got tired of being punched in the face and promised to do something not related to mixed martial arts.

Anthony Johnson has often been involved in physical abuse scandals. Most of them seem to be caused by the sportsman’s popularity and the media’s intention to use his image to earn. However, some facts are true.

In 2009, Johnson was arrested for violation against the mother of his two kids; he had three years probation. In 2014, Rumble’s partner claimed he had smashed her tooth, but the athlete was found non-guilty.

Johnson is a religious person and belongs to the Baptists; he often goes to confessions. Anthony’s grandmother instilled the interest to faith in the child and gave him a cross when Johnson was graduating from a high school. Since that time, the man has been keeping the precious present.

Johnson mentioned in his interviews that he could come back to sports if he had an exciting opponent. Rumble dreamed of fighting against Jon Jones. In September 2018, the picture on the athlete’s Instagram appeared: Johnson and Jones faced each other as if they were having their weight registered.

Fans were looking forward to their match, but Anthony said he did not believe it would ever happen.

Today, the sportsman travels across the country and gives autographs. He remembers the previous achievements but whether the nostalgy can inspire him to prepare for future fights is unknown: there has been no information about his 2019 matches whatsoever.

Anthony Johnson’s net worth is estimated at $4 million in 2019.