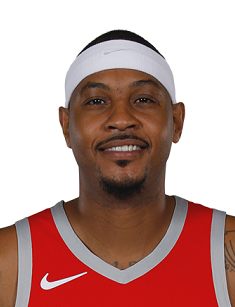 Born in Brooklyn, Carmelo Anthony started a basketball career in NBA in 2003, as a rookie of Denver Nuggets. He was an NCAA champion and MOP, drafted after one season in college. He was chosen after LeBron James and Darko Miličić. Anthony was playing for Nuggets in 2003 – 2011, for Knicks in 2011 – 2017, for Thunder in 2017 – 2018, and for Rockets in 2018 – 2019. Anthony represented the national team of the USA. He plays at a small forward and power forward positions.

Also, Carmelo is married and has a son. Anthony has a net worth of $120 million, including all of his properties and earnings. He earns an additional $9 million a year from endorsements.

Carmelo’s birthplace was Brooklyn. He was born there on May 29, 1984. His grandparents were the Porto Rico natives. His father Iriarte and mother Mary Anthony had African roots. At the age of two, Anthony lost his father because of his dying of cancer. It was a big hit for the family. Mary was forced to work long hours as a housekeeper to support her family.

Carmelo was much younger than his siblings. They helped out looking after him. Their names were Wilford, Robert, and Michelle. When Carmelo was eight years old, his siblings were ready to move out. Mary headed to Baltimore with her youngest son. Anthony and Mary settled in a bad place. Their neighborhood was known as “The Pharmacy”.

They risked their lives, living there. Crime and drugs could be found on every corner. However, Mary could influence Carmelo very well. If he stepped out of line even slightly, he wasn’t allowed anywhere near a basketball court. As a kid, he was crazy about basketball. He was involved in sport and spent all his free time in courts and sports fields.

He rapidly found new friends. Anthony, Kenny Minor, and Tyler Smith could not sneak into a gym. So, they found materials and made their own gym. From about age 9 to 13, Anthony and his friends stood underneath the bridge with Squeegees in hand. When cars stopped at the intersection, the boys sprang into action. Carmelo earned about $30 a day.

Carmelo studied in a private catholic school, titled Towson Catholic High School. Anthony liked it because of its basketball program, and his mother signed off on the $5,800 annual tuition because of its educational program and disciplinary structure. Carmelo grew very fast and became one of the tallest players in his area. In the local league, he won the MVP award at his first season. He scored a double-double in points and rebounds per game and led his school’s team to the third place.

The outstanding game of Carmelo attracted a lot of college’s coaches. All of them wanted to take talent. Because of his poor academic records, Anthony moved from Baltimore to Virginia and attended Oak Hill Academy. There he had two goals: to pursue his high education and to become a professional basketball player.

Carmelo was managed to improve his academic results and to become the highest ranked high school basketball player in the US. Unlike many NBA starts, Carmelo didn’t want to start in the NBA without a college education. In 2002 he enrolled at the Syracuse University. The same year he was invited to join the junior national team of the USA. He agreed and helped his teammates to win bronze medals.

The Carmelo’s arrival became historical for the Syracuse. In 2003 the college’s basketball team won their first NCAA tournament. Anthony was its leader on all counts, setting records one by one. He showed the most outstanding playing in the finals and received the appropriate award. The winning of MOP award and NCAA title changed his views on the future. Carmelo became available on the Draft 2003.

The lottery of 2003 was full of future NBA stars. Carmelo was selected third by Denver Nuggets. There were such players as LeBron James, Dwyane Wade, Chris Bosh, and others. Nuggets’s rookie made his debut on October 29. Melo scored 12 points and 7 rebounds.

In his sixth game, he became the second youngest player in the history of NBA, who could score 30 points in a game. Next year he scored 1000 career points. It’s hard to believe, but in the second half of 2013-2014 season, Melo received all awards for the best rookie of the month. And this happened when LeBron played.

The Melo’s outstanding game allowed him to join the national team at the 2014 Olympics. Next season he scored 20.8 points per game on average. Carmelo scored hundreds of points and rebounds next seasons. In 2007 he was included in the list of NBA All-Star roster.

In 2008 he scored 9000 career points. Once, Carmelo scored 71 points in a game. He showed monstrous statistics, but Nuggets couldn’t pick high positions in the table. So, in 2011 he was traded to Knicks, where he played with Jeremy Lin and Amar’e Stoudemire. That season he had the career-best mid range percentage of three-point shots (42.4%).

By 2013, he became the first Knicks player with the highest-selling jersey in the NBA. The incredible playoff stats of Melo couldn’t ensure Knick’s participation in the NBA finals. And in 2017 Anthony conflicted with the president of the club. He asked for a trade and moved to Thunder. He couldn’t overshadow the amazing “mister triple-double” Russell Westbrook, and in 2018 he was included in an exchange deal with Atlanta Hawks.

Anthony didn’t play for them and accepted a contract buyout, wanting to join LA Lakers or Miami Heat. However, he signed a one-year contract with Rockets in summer 2018. In Houston, he was a spare player. Tracy McGrady even advised Melo to retire. Wanting to go off the bench, Melo moved to Bulls in winter 2019. On February 1, he was waived by them.

In April 2019, there were rumors that the Jazz was granted a disabled player exception for point-man Dante Exum over the weekend and would use it to sign Carmelo to a multi-year deal. Financials on the deal weren’t released, but it was believed that Carmelo had a player option for the 2019-20 season. That information is still unproven.

Started in junior team in 2002, he joined the Men’s national team in 2004 as NBA’s rookie. He won the bronze at 2004 Olympics. In 2006 he became the world’s champion. He scored 35 points in a game. It was the best result in the history of the US national team.

In 2008, 2012, 2016 Anthony was named to Olympic Games. The USA won all of those tournaments, and Melo became the only basketball player, who could win three gold medals in the USA and who played in four Olympics. Also, he set a lot of records and headed the all-time scoring list of the Team USA.

Anthony announced his engagement with Alani Nicole “La La” Vazquez in 2004. In 2007 she gave birth to their son. Three years later they tied the knot. Their son, Kiyan, escorted them to the altar. Currently, Carmelo posted the photos of his family on his Instagram.

In 2014 Carmelo tried himself in movie field. He played the role of Cartwright Soldier on the FX original series Sons of Anarchy. Carmelo appeared only on the episode "The Separation of Crows" in the series' seventh, and final, season.

Before and after fame, Melo was always partial to poor people. Started in NBA in 2003, two years later Baltimore native provided an early Christmas dinner for many families in Baltimore Friday night. His mother hosted a dinner for 150 people, including families from McCullough Homes, the housing community where Carmelo was raised, at the Macedonia Baptist Church downtown.

Carmelo and his mother wanted to provide the guests with a special holiday experience, complete with a deejay spinning feel-good, classic R&B and Christmas carols. The church's choir also performed along with two local dance groups: holiday ice sculptures and fancy flower arrangements made for a festive atmosphere.

Next year Carmelo presented his college with the lead gift for the construction of a newly planned basketball practice facility. Anthony, then-captain of Nuggets, donated $3 million toward the building.

Anthony’s gift represented one of the largest individual donations to Syracuse University Athletics and was also believed to be one of the largest by a current professional athlete to the school they attended. The center was named after Carmelo.