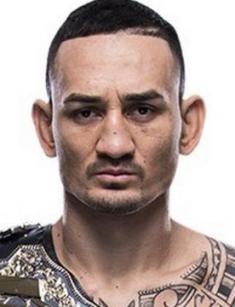 Many fans love the native of Hawaii, MMA fighter Max Holloway for his excellent skills using which the fighter masterly alternates favorite techniques: a jump, an armbar, a roundhouse kick, etc.

The fights with Holloway, whose whole body is covered in tattoos, are always spectacular and dynamic. The athlete performs in the Featherweight category (147 pounds with a height of 5 feet 90 inches). He has run professional activity within the UFC since 2010. Among his great victories are fights with the Brazilian Jose Aldo and the American Brian Ortega who was considered invincible before this duel.

Jerome Max Holloway was born on December 4, 1991, in Honolulu, Hawaii, United States. The boy became a representative of a large international family. He has Hawaiian, English, and Samoan blood in his veins. Referring to his childhood years, Max doesn't talk much about his parents, but mostly about his grandmother Sitia Capo, who gave him and his brothers lots of love and care.

Holloway grew up in the Hawaiian town Waianae. Here he went to high school, where he became interested in martial arts, began to engage in kickboxing, but it did not come to big sports. After graduating from school, the guy was looking for ways to earn money, he was a handyman. As a result, Max decided to bet on sports.

It is believed that the sports career of Hawaiian began very late – at the age of 19, he began to comprehend the skill of Thai Boxing. But the guy developed professional skills so quickly that he easily made up for the lost years. No wonder that at the peak of his glory, Holloway took a stage name Blessed. It was as if nature really had blessed him, gave him an incredible ability to control his body.

Cat's grace, noiselessness of the snake, puma's powerful jumps – seeing all this in the process of training, the masters only shook their head. Soon Brazilian Jiu-jitsu skills, in which the athlete later received a purple belt were added to the technique of Thai Boxing.

At the age of 20, Max Holloway had already set a record: 4:0. He celebrated the first four victories of his professional career in his native Honolulu, performing in the ring of UIC and X-1 Championships in 2010-2011. February 4, 2012 – the date of his first match within the UFC. The debut, for which the Hawaiian had high hopes, was a failure. Max was defeated by the American Dustin Poirier, acting in the Lightweight category. The guy used a choke against Holloway on the fourth minute.

However, in the same year, Max managed to make it up for his failure by having three victories, defeating Pat Schilling, Leonard Garcia, and Justin Lawrence. In the first two cases, the triumph of the Hawaiian was confirmed by the decision of the judges, and Max sent Lawrence to a technical knockout.

The fighter remembers the year 2013 as the most unsuccessful in his career. In a duel on May 25, 2013, American Featherweight Dennis Bermudez won a victory over Holloway by a separate decision of judges. The Hawaiian received the new blow in August – on UFC Fight Night 26 tournament in Boston. In the fight with the shocking Conor McGregor, his position was much weaker. The judges by unanimous decision awarded the first prize to the Irishman.

Two defeats in a row forced Holloway to concentrate as much as possible on training, practicing techniques and improving skills. And it paid off quickly. In 2014-2015, Max demonstrated excellent form, which allowed him to make four famous victories for each year, earning impressive fees.

Among the most exciting battles of this period was the duel with the Swede Akira Corassani, which became the performance of the evening. The "Blessed" easily knocked out his opponent with his signature punches. The fight with the famous martial artist Cub Swanson, a representative of the older generation of fighters was also spectacular. Holloway used a choking technique, the guillotine, against the opponent.

The main event of 2016 for fans of MMA was the announcement of the battle of Holloway and the titled fighter Anthony Pettis. The fact is that at an early stage, the "Blessed" was compared with Pettis for similar spectacular fighting technique and maneuverability. The fight promised to be beautiful and exciting, and it turned out to be exactly that. Holloway – in a title of the temporary champion of UFC in Featherweight came out the winner of the championship.

Sharply risen in the standings, the Hawaiian fighter challenged a stronger opponent to come up to the ring. And in June 2017, the first meeting of Max Holloway and Brazilian champion-Featherweight José Aldo took place. By this point, Aldo had only two defeats, one of them – from Conor McGregor. The fight took place in the homeland of Aldo in Rio de Janeiro. The Brazilian surrendered in the third round, and Max Holloway was named the new champion. In December of the same year, he met Aldo for the second time in the fight for the title and once again found success.

On December 9, 2018, the champion fought with Brian Ortega. The admirers called this game spectacular and gorgeous. Two superprofessionals came together in the ring: on account of Max was 19 wins vs. three losses, and Ortega was undefeatable after 14 brilliant victories. The fighters gave the audience a spectacular four rounds until the doctor stopped the fight, assessing serious injury of Ortega – a broken nose and a finger, puffy eyes. Thus, Holloway confirmed his title of the champion of UFC in semi-lightweight.

In 2012, Max ended his bachelor life and married Hawaiian model and former actress Kaimana Pa'aluhi. The couple married on the most romantic day – February 14, Valentine's Day. In the same year, his wife gave him a son, Rush Holloway.

However, life together could not stand the test, and in 2014, it became known that the athlete and the model got divorced. Former spouses equally divided custody of their son. Holloway, despite employment, takes a considerable part in the upbringing of his son. He often publishes joint pictures with his boy on Instagram: father and son visit playgrounds, travel, eat pizza.

Max Holloway's net worth is estimated at $1.5 million. Now the athlete is the second Hawaiian, who became famous in MMA, having received the title of champion, after B.J. Penn who won the absolute victory in 2008 and 2009.

As for his new fights, all fans of Hawaiian wait for his rematch with Dustin Poirier which will take place on April 13, 2019, on UFC 236.