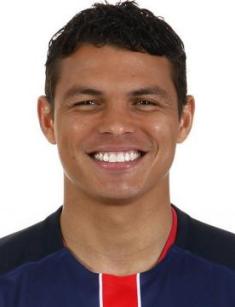 Thiago Silva has reached incredible success in soccer: he is among the highest-paid center backs in Europe. Besides, the athlete is the leader of one of the strongest world clubs, Paris Saint-Germain. However, climbing to the top was not easy for Thiago: he had to face many ordeals before his talent brought fruits.

The player’s early life was not something to be jealous of. The would-be soccer star was born in the slums of Rio de Janeiro into a low-income single-parent home. The mother brought up three kids: two sons and a daughter. As the woman confessed in her interview, she was going to have an abortion: the birth of the third child would make the family’s poor existence even worse.

However, legal abortions are not done easily in Brazil; it was necessary to have a solid reason. Besides, the woman’s father persuaded her to keep the child.

The family lived in a ramshackle house; three siblings had to share one room. Thiago grew up in a criminal neighborhood and got into a bad company early; only faith saved him from a disaster. Soccer was also the boy’s way of escaping: he was playing with his neighbor, the future soccer celebrity David Luiz, all day long.

Gradually, the hobby transformed into a great passion. Silva was dreaming of a sports career and joined the Campo Grande school supported by Fluminense at the age of 14; however, he did not stay there for long. Further on, the young man got to Barcelona (Rio de Janeiro) and became a fan of the Catalonian Barcelona; he was enthusiastically watching Ronaldo’s and Romário’s achievements.

The professional period began in 2004. Thiago was accepted to an ordinary club Juventude, but European clubs noticed the talented newcomer soon.

Even Bruno Conti considered the athlete as a part of his team, but Silva refused. He did not wait until the final of the Campeonato Brasileiro Série A and moved to Portugal to join the reserve team of Porto. The transfer cost was €2,5 million.

The young man did not become the first-eleven member: Pepe and Jorge Costa were primary defenders. However, Silva made friends with the agent Jorge Mendes who started collaborating with him in a while and gave an unusual offer – to go to Russia. Thus, Thiago Silva found himself in Dynamo Moscow.

The player was unlucky. The coach Oleg Romantsev praised his skills at the first training, but he did not like the fact that the Brazilian got tired quickly. As it turned out, Silva had an active form of tuberculosis; he had to spend six months in a Moscow hospital.

Speaking about Russia, the sportsman expresses his ambiguous feelings. On the one hand, he was disappointed he had no chance to play with the Russians; however, he was grateful to the club’s director Yuri Zavarzin who helped the man’s mother come to Moscow.

Two years later, an incident darkened the impressions of Russia. In 2006, Dynamo let the recovered athlete go peacefully and canceled the contract. However, when it was revealed that Milan had bought him for €10 million, the organization sued him for unauthorized termination of the contract and demanded €15 million as the termination fee. The court rejected the claim.

Following the frustrated career in Russia, Thiago came back to his homeland and joined Fluminense. This is when Silva finally had the opportunity to show what he got: the sportsman’s defense was severe, and he was nicknamed “the monster”.

The Brazil national team invited Thiago, and his performance was brilliant; the team won the bronze and silver during the Olympic Games in 2008 and 2012 correspondingly.

In 2009, Silvio Berlusconi bought the defender to his club, Milan. Tall and light (the man’s height is 6 feet or 183 cm., and his weight is 174 lbs. or 79 kg.), the player earned admiration from Alessandro Nesta and Paolo Maldini. Maldini, who was the captain of the team, even called the Brazilian his successor.

As a member of Milan, Silva became one of the leading athletes; he played 93 matches and scored three goals. The club enjoyed the victories at Serie A and Supercoppa Italiana. Thiago was going to stay for a long time, but Paris Saint-Germain offered Berlusconi €42 million for the center back in 2012; the deal went through.

Silva got number two in the new team and adjusted to the new team quickly. Overall, he won 15 trophies, including four Coupes de France. Today, Thiago dreams of winning the Champions League. The contract with Paris Saint-Germain expires in 2020.

Thiago Silva is married; his wife’s name is Isabele. The couple has two sons, Isago and Iago.

Isabele is a loyal supporter of her husband; they make all decisions together. In 2009, the Brazilian joined Milan thanks to the woman’s advice. Real Madrid was also ready to accept Silva, but she preferred Italy to Spain.

The player has an Instagram page and shares many pictures and videos of his personal and work-related moments.

In 2017, Thiago Silva combined working at Paris Saint-Germain and preparing for FIFA World Cup 2018. The sportsman had severe trauma during the qualifying match against the Bolivia national team. He left the field at the 29th minute on a stretcher.

Soon, Silva was included in the first eleven of the national team and went to Russia. The group stage was splendid: Brazil surpassed Switzerland, Costa Rica, and Serbia. The latter match was marked with Thiago’s goal. In the 1/8 final, the team successfully defeated Mexico and reached the quarterfinal to face the Belgium national team.

There were some dramatic moments among the Brazilians. As the match with Costa Rica was going on, Silva followed the principles of honest playing and gave the ball to the opponent after one of the players had had an out.

The Costa-Rican player did that because Neymar was lying on the grass and needed medical attention. However, Neymar did not like Silva’s fair-play principles and insulted his colleague.