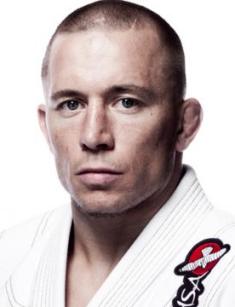 The Canadian star, Georges St-Pierre, is widely regarded as one of the greatest mixed martial artists. Since 2006, he has repeatedly won and defended the UFC champion title in the welterweight division, having only two losses during his entire professional career.

Journalists had even called St-Pierre "the king of the welterweight" before he quitted his martial arts career in 2013. Then the Canadian fighter did not enter the octagon for four years due to health problems. He returned in 2017 and immediately won the Middleweight title. St-Pierre is one of the few fighters who combine sports career with filming.

Georges St-Pierre was born on May 19, 1981, in Saint-Isidore, Quebec, Canada. His father Roland St-Pierre worked as a carpet installer. Mother Pauline St-Pierre served in a nursing home for the elderly.

Georges became the firstborn son of the couple who later had two younger daughters. At the age of 7, the boy went to school and immediately faced aggressive behavior of a group of high school students. The hooligans stole his pocket money and valuables, threatening him with physical violence in case the boy told everything to his parents.

Scared Georges kept silence, but he could soon solve a difficult situation. The boy began learning Kyokushin Karate to defend himself against a school bully. The teenager learned karate and played ice hockey, liking both sports very much. However, when he was 12 years old, his parents asked him to make a choice, since they could not pay for two classes.

The boy chose karate because he could fight alone and did not depend on other players. To some extent, this principle has become the fighter’s motto.

The boy was almost 16 years old when his Karate trainer died. After that, Georges also took up Brazilian Jiu-Jitsu, boxing, and wrestling, began to study kinesiology, the study of human motion. The young man had several jobs to pay for it.

“I was a garbage cleaner, worked at nightclubs and the floor covering shop. I invested all my money in learning martial arts because I had a dream to become the best fighter," St-Pierre admitted in an interview.

At the age of 21, Georges had a Kyokushin black belt and immediately made his professional MMA debut. The Canadian athlete won the match against Salvadorian fighter Ivan Menjivar via TKO in the first round. The same year, St-Pierre won the UCC Welterweight Championship (his weight is 171.96 lbs. (78 kg) with a height of 5.87 ft. (179 cm)) and defended the honorary title.

In 2005, Georges participated in four UFC fights, showing brilliant performance in each of them. He defeated such rivals as Sean Sherk, Jason Miller, Dave Strasser, Frank Trigg.

The fight, which took place on November 18, 2006, became an exciting and significant event for the Canadian athlete. In the ring, he faced the award-winning fighter, Matt Hughes, again, who defeated Georges in the first fight. This time, the American could fight against the Canadian only for two rounds, after which he was defeated via technical knockout. So, St-Pierre won the UFC Welterweight Championship.

However, Georges did not hold the champion's belt for a long time. Six months later, in April 2007, the Canadian lost the championship title to Matt Serra, which was the second loss in his career. Swearing to return the title at any cost, St-Pierre rushed into another battle.

The next fight against Josh Koscheck turned out to be complicated. The rivals competed for all five rounds, but the Canadian won a unanimous decision. At the end of 2007, Georges had another fight against Matt Hughes, knocking him down with a painful blow and winning the title of interim UFC champion.

Soon, St-Pierre regained his champion title, as he promised. In April 2008, he came to the octagon and faced Serra; he did not leave the rival any chance to mount a significant offense. Near the end of round two, Serra could not defend himself from St-Pierre's continuous knee blows. It is symbolic that Georges won the title in his homeland, Montreal.

Nine brilliant victories for five years made Georges St-Pierre a living legend and the welterweight king. However, the Canadian fighter paid a great price to achieve such fame. Having received though physical and psychological fatigue, he decided to take a career break in 2013.

“I made this decision to improve my mental health. I stopped sleeping, became nervous. It's very hard to explain because nobody really knows what it feels like. If you've been a champion for so long, it's crazy the pressure you have on your shoulders. The life of a champion is different from the life of an ordinary fighter, just like an ordinary fight is different from a title fight,” he explained his decision to journalists.

The triumphant return took place in 2017 in New York City when St-Pierre entered the ring after a 4-year hiatus against English fighter Michael Bisping and defeated him via technical submission (rear-naked choke) in 4 minutes. The 36-year-old athlete won the UFC middleweight champion.

The fighter’s life is also connected with the art world. So, in 2009, he made his acting debut in the films Death Warrior and Never Surrender. Georges played a fighter in the last movie, telling about the life of mixed martial artists.

The first success in the film industry was the role in the superhero action movie Captain America: The Winter Soldier (2014) about the adventures of Captain America. The athlete portrayed Georges Batroc, who joined the dark side.

In 2016, the film Kickboxer: Vengeance was released, in which St-Pierre worked with his childhood idol, Jean-Claude Van Damme. The movie is a reboot of the 1989 film of the same name.

In 2017, the fighter played in the crime action movie Cartels about the adventures of the American mafia. Georges’s partners on the set were famous actors Steven Seagal and Luke Goss.

The mixed martial artist has not almost paid attention to his personal life.

“He just has not had enough time because he has trained for all his life,” his trainers say and shake their heads.

There were rumors that he had relationships with his manager, who allegedly gave birth to his child, but all those reports remained unconfirmed.

Georges says in interviews that he is not an ascetic, and his Instagram page has a lot of photos with beautiful women. However, the athlete does not tell that he plans to have a wife and children in the near future.

It has recently transpired that Georges suffers from an obsessive-compulsive disorder.

In 2018, MMA fans began spreading rumors that the Canadian fighter wanted to challenge the winner of Nurmagomedov vs. McGregor.

However, St-Pierre dispelled speculations, saying that the fight with Khabib would be very significant for him in terms of the legacy he wanted to leave behind after the end of his career. The Russian fighter also expressed interest in fighting with the living MMA legend.

In February 2019, St-Pierre officially announced that his managers were trying to negotiate with the UFC to organize a fight with Nurmagomedov. Now the negotiations are underway.

Georges St-Pierre has an estimated net worth of $30 million.