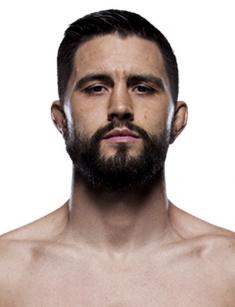 The American mixed martial artist Carlos Condit is nicknamed “The Natural Born Killer”. Throughout his career, the athlete has performed in many sports organizations: Pancrase, Shootboxing, WEC, and UFC and had many victories with spectacular knockouts; the jury’s decisions were often unanimous.

Carlos was born in spring 1984 in Albuquerque, New Mexico. He spent the whole childhood in the United States. The parents were of Mexican origin: the mother worked in obstetrics and gynecology, and the father was a high-ranked bureaucrat employed by the governor of the state.

Condit took an interest in sports early. He tried wrestling but did not like it much and joined a mixed martial club at the age of nine. The boy was good at the new activity. When the promising sportsman was 15, the legendary MMA coach Greg Jackson noticed him and started training him. Thus, the young man’s fights reached the professional level.

It happened in 2002 when Carlos participated at Aztec Challenge. The next two matches were even quicker: Anthony Zamora was knocked out in 29 seconds, and Tommy Gouge lost 45 seconds after the beginning of the fight when Carlos used an armbar.

It was an impressive start for the young fighter. In 2007, WEC representatives invited him to the organization; the first meeting with Kyle Jensen was held in January of the same year. Condit defeated the rival in the first round, two minutes ten seconds after the beginning, by rear naked choke.

Thus, Condit had the chance to fight for the WEC Welterweight Champion title. He successfully beat John Alessio by the same technique, rear naked choke, and defended the title in the next two matches.

In 2008, WEC ceased to exist; Carlos was its last champion. His career improved. In April 2009, the man performed at UFC but lost to Martin Kampmann in his debuting meeting. However, the jury gave Condit the victory with the next opponent, Jake Ellenberger. In 2010, the American got Fight of the Night against the Canadian athlete Rory MacDonald. In 2010 and 2011, Condit received two Knockout of the Nights for the matches against Dan Hardy and Dong Hyun Kim.

In February 2012, Carlos struggled for the Interim UFC Welterweight Champion title. Following five rounds with Nick Diaz, he won the cherished award by the jury’s unanimous decision. The next two battles against Georges St-Pierre and Johny Hendricks were failures, though.

January 2016 brought the next fight for the UFC title; the event took place in Las Vegas. Condit fought Robbie Lawler for five rounds. The jury’s decision was split; Lawler was given the victory.

However, Carlos received the Fight of the Night award. In December 2017, he lost to the American Neil Magny which spoiled his record. In April 2018, Alex Oliveira defeated Condit with a guillotine choke. The year finished with another loss for Carlos: Michael Chiesa used a kimura technique and won at the 56th second of the second round.

The fighter’s personal life is happy: the man is married to Seager McCullah. The young people met in 2005; Carlos began to court the woman, and they started a romantic relationship soon. In a while, Condit and McCullah married; two sons were born in the family.

The athlete does not post his pretty wife’s pictures on Instagram. It is unlikely that the man wants to look single for other women: Carlos seems to be a private person when it comes to his family life.

The sportsman is known for the beautiful tattoos on the left shoulder blade and the right side near the ribs. The creators of THQ video games wanted to use the picture of the lion in the UFC Undisputed 3 game, but the tattoo salon owner did not agree and even filed a suit.

Sometimes, Condit wears a suit in front of cameras; fans believe that their favorite is handsome in any clothing, whether it is the business or sports style.

In April 2018, the athlete had to cope with the loss to Alex Oliveira; he was bitter and depressed but congratulated the opponent and wished him luck in the next fights. Carlos began to think about leaving the sport.

In a while, the man decided to have another try but had the fifth failure. Unlike the previous time, Carlos avoids comments about his defeat, so fans can only wonder whether the athlete quitted the sport or he will come back in 2019. As for now, Condit’s net worth is $500 000.