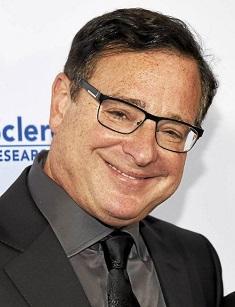 Robert Saget, better known as Bob Saget, was born in Philadelphia. His father, Benjamin Saget worked as a supermarket executive. His mother, Rosalyn "Dolly" Saget was an administrator of a Children's Hospital of Philadelphia. The marriage of his parents continued sixty-three years.

Saget used to live in California with the family before they returned to Philadelphia, where he finished high school. From an early age, Bob stood out among others with his skills to joke. Since kindergarten, he has always been the center of attention for girls. He could easily make people laugh. At school, Bob was interested in making movies with a Super 8 camera. Being a schoolboy, he dreamt of receiving medicine education and getting the profession of a doctor. His English teacher, Elaine Zimmerman, was the first who appreciated his acting talent and advised Bob to get an education in cinematography.

Saget got an education at Temple University's film school. While studying, he produced a movie about a boy who got reconstructive facial surgery. He named it Through Adam's Eyes. His work was highly rated by teachers and students, and Bob was given an award. In 1978, he graduated from the school with a bachelor's degree. Then he took graduate courses at the University of Southern California. But soon he felt the desire to leave the classes. In one of the interviews, Bob recited that at the age of 22 he was not in the best shape and suffered excessive weight. Besides, he had surgical removal of the appendix, which he endured with difficulty. After the surgery, he began to get back in shape.

In Los Angeles, Bob started his career as a stand-up comedian. Several years he performed in a comic club circuit, practicing his one and only style of commentary. At the beginning of his creative path, Saget got acquainted with comedians Gary Shandling and Dave Coulier. Bob's fondest wish was to succeed in his profession, so he took on various parts.

In Manhattan, Bob Saget met Brad Grey, who was looking at weekends for young comics at The Improv, a comedy club franchise. Grey brought a novice comedian to New York, and Bob became the first client to manager Grey. Bob received roles in movies and tv shows. In 1987, Saget was offered to star in the CBS's The Morning Program. Producers hoped he could make the show more vivid and humorous. Taking part in this news show was a great opportunity to show off, but the shooting didn't last long, as Bob later spoke up, “he was too hot for the morning show.”

After starring in The Morning Program, Bob got the role of Danny Tanner in Full House, a television sitcom about the widowed father and his three daughters. The sitcom was loved by many viewers and scored high ratings.

From 1989 till 1997, Bob worked as a host of America's Funniest Home Videos (AFV), video clip television series with comical homemade videos. In a certain period the comedian filmed in both: Full House and AFV.

In 1996, Bob became the producer of the ABC television movie For Hope. The idea to make this film came after the tragic loss of his sister, Gay Saget, who died from scleroderma.

In 1998, Bob produced his first feature film, Dirty Work, starring Norm Macdonald and Artie Lange. However, the work received more negative reviews than good ones. Although, sometimes it is mentioned and is spoken about on TV, despite the negative feedback.

Bob earned fame after voicing the future Ted Mosby, the main character in the sitcom How I Met Your Mother. The show came out on September 19, 2005, and soon won the hearts of its viewers. It was nominated for 30 Emmy Awards, winning ten of them.

In 2005, Bob took part in the film The Aristocrats, in which Saget and 100 other comics were discussing and retelling one famous dirty joke, which was widely known in comedy circles since the vaudeville days. The joke again began to appear in the performances of comedians after it was used by comedian and actor Gilbert Gottfried during the Friars' Club roast of Hugh Hefner in 2001.

In 2006, the video about a Tourettes guy blew up the Internet. A guy who has suffered Tourettes Syndrome was doing everyday activities. In one of his videos he cried out “Bob Saget” several times, which sounded ridiculous, but funny. Later Bob mentioned this guy in his stand-up performances and made jokes of him.

On August 28, 2007, Bob released the HBO comedy special, That Ain't Right. The film was shot in memory of his father, Ben Saget, who died at age 89 from congestive heart failure.

In 2007, Bob put out the parody of 2005's March of the Penguins. His film Farce of the Penguins had a narrator and the two main characters voiced by Bob Saget and Lewis Black.

In April 2009, Bob starred in a sitcom, Surviving Suburbia with the co-star Cynthia Stevenson. The series had a low rating and were canceled the same year.

In 2010, Saget appeared in the series Strange Days about his adventures during the trip to America, where he showed lifestyles and cultures of people.

In 2014, his book Dirty Daddy came out. Bob shared the facts about his life, comedy influences, and career. For the book promotion, he took a small tour. The same year, Bob traveled to Australia with a stand-up show called Bob Saget Live: The Dirty Daddy Tour.

In 2015 and 2016, he appeared in two episodes of Grandfathered, an American sitcom, depicting a bachelor's life who discovered that he had a son as well as a granddaughter from a long-standing bonds.

In 2019, Bob became a host of Videos After Dark, an American video clip television series, a byproduct of the series AFV.

In 1983, Bob Saget got married. An attorney Sherri Kramer became his first love and wife. The couple had known each other since high school. Sherri gave birth to three daughters: Aubrey, Lara Melanie and Jennifer Belle. The marriage lasted for 15 years. Sherri and Bob broke apart In 1997.

In 2010, Bob was dating an American model Hope Dworaczyk Smith. However, their relationship lasted only one year; they split up in 2011.

There were rumors about Saget's sexual orientation. But there is no reason to believe he is gay. Bob is currently engaged to Kelly Rizzo, a food and travel blogger. An actor proposed to his girlfriend Kelly Rizzo with an impressive diamond ring after two years of dating. Bob Saget and fiancee Kelly say they are not planning to have kids. The couple celebrated the wedding on 28 October, 2018.

Bob Saget's net worth is estimated at $100 million.

Saget is actively involved in charity. He is known to be a board member of the Scleroderma Research Foundation. The main reason for Saget to join the membership became his sister's health problems. In one of the interviews, Bob shared a heartbreaking story about losing his sister, who died from scleroderma at the age of 47.

Doctors announced the diagnosis when she was 43. Earlier, the diagnosis was made wrongly. Bob's scleroderma efforts have further benefited Regina Hall, famous for starring in Scary Movie.