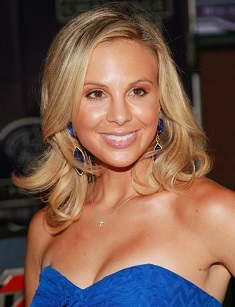 Although Elisabeth Hasselbeck retired a couple of years ago, she is still well-known as a prominent TV host that dedicated her best years to The View, an American talk show. She keeps being very influential simply as a mother of three and a loving wife.

Elisabeth Hasselbeck was born on the 28th of May, 1977 in Cranston, Rhode Island, which is considered to be one of the safest cities in the U.S. Her mother, Elizabeth DelPadre, originated from Italian descents and was occupied as a teacher in Catholic school. Kenneth Filarski, Hasselbeck’ father, was an architect. Overall these were very calm professions for such a peaceful city.

As a girl, Elisabeth was sent to St. Mary School, a Catholic one, and later she was transferred to St. Mary Academy – Bay View situated in East Providence, which was quite far from home. In 1995 she successfully enrolled at Boston College, where she started her education as a future artist. The focus was made on industrial design and substantial paintings; however, she got a job at Puma and for a while was a part of their drawing team. At the same time, Elisabeth achieved some progress playing softball at College. As a captain of the team, she led other girls to victory twice on the Big East championships, which is a collegiate athletic conference of 16 Universities, located in the East.

Hasselbeck received a Bachelor of Fine Arts degree in 1999, but it was still two years before her TV rise.

What is more, Elisabeth has a brother, Kenneth Jr., who is also successful, but in his area of expertise — he is reported to be talented both in music and law.

Appearing on TV wasn’t Hasselbeck’s principal idea at all, but somehow she discovered herself taking part in the second season of Survivor, called The Australian Outback. During this reality show from 16 to 20 contestants, that haven’t met before, are put in faraway and uncivilized conditions, where they have to roleplay castaways, building shelters, making fire, and getting food. Usually, they are guided with tasks that appear with the help of a special mail. An American version of the show is also an adaption of a Swedish one, but it gained extreme recognition and love from the public.

The filming of the season, which Hasselbeck attended, was made in the fall of 2000 and lasted for 42 days, which was a record for the show. The contestants were put in the wild and divided into two tribes, named after Australian animals on the local language. The whole show was intended to make members compete, so rivalry and confrontation increased with every episode. Some accidents occurred; for instance, one man had to quit due to an injury. Although Hasselbeck did her best and was chosen as the public’s favorite, she came the fourth to the final. Being Elisabeth Filarski back then, she was announced as a shoe designer and played alongside a former police officer, student, lawyer, barman, musician, etc.

As a rule, contestants starting from some point begin to form a jury, which will have voting power in the end. Moreover, the last episode is wholly dedicated to a discussion with everyone who took part. Obviously, she looked brilliantly, and her hot legs drew the attention of all men at the filming location, but, perhaps her charisma and sincerity paved her the way to remain on TV.

Later Hasselbeck was asked to be a judge at the Miss Teen USA 2001 pageant, but that was a one-time work. In 2003 she was hired by the Style Network. A host of the show Look for Less Hasselbeck was again supposed to act a lot, entertaining the viewers. Accompanied by a professional stylist, a host had to select cheap clothes that would look like an actual runway outfit. Of course, there were limits on the amount of money and time.

In 2003 Hasselbeck was a little forced by her agent to come to an audition for a new host of The View. Lisa Lind, a former host, was more fond of her career as a reporter than of debating in front of the audience.

All in a sudden in her mid-twenties Hasselbeck obtained a permanent position on the show and became a co-host with Barbara Walters, Joy Behar, Star Jones, and Meredith Vieira. The initial cast didn’t stay long, and soon hew changes were made.

Sometimes Elisabeth didn’t come along with colleagues, specifically Rosie O'Donnell. An actual dispute took place while those two were discussing their attitude towards the war in Iraq. O’Donnell left prematurely after the quarrel in 2007 but returned to the show seven years later. Such decision was considered ambiguous and even criticized by Donald Trump.

There were also some controversies and inconsistencies noticed. In one episode Hasselbeck argued that an outfit had to be reserved and consist of more than one piece of clothes till complete nudity, but was put in her place. She was reminded that while on Survivor she wandered around half-naked and even took part in a photoshoot in a bikini that demonstrated an excellent condition of her postnatal body.

On the whole, her hosting was pleasant and amusing. Several women were sitting at the same table and discussing various stuff in front of the whole country — can anything even sound better? Elisabeth claimed that she became more profound and experienced thanks to Barbara Walters, that guided her through for all this time.

In 2009 The View cast was honored with the Daytime Emmy Award.

However, Hasselbeck has always been a little accused of her conservative ideas, by the end of her ninth year on the show she was reported to be too right-wing. The polls were conducted, and the audience agreed that it wasn’t solely Elisabeth who kept their attention. So, in 2013, a long-term host and ABC didn’t sign a new contract, and an ex-host was free to choose any other job.

Hasselbeck preferred staying attached to the TV and joined Fox & Friends, the Fox News morning show. The position of the co-host was vacant since Gretchen Carlson, an ex-Miss America, left in order to anchor her own programme.

Since Elisabeth came in September 2013, the ratings of Fox & Friends rose rapidly, and she might have stayed on the show for a while, but that didn’t suit her. Although a beloved host was surrounded by conservatives that comforted her, she was too exhausted with the amount of work. Thus a mother of three kids took an early retirement since she didn’t forget who she was first and foremost.

At the time of being Filarski, Elisabeth met the love of her life while she was studying at college. She was playing softball, he was playing football - that was destiny. In 2003 Tim Hasselbeck married Elisabeth, and a new family was formed. Two years later their one and only daughter, Grace Elisabeth, was born; Taylor Thomas followed her in 2007, and in 2009 Isaiah Timothy was brought into the world.

Now the Hasselbecks are living in Nashville, where they moved in 2016, but very little is known about their routine. Elisabeth doesn’t like exposing her children to either Instagram or Twitter, and that involves her husband too. For today, Tim has also finished his professional career and is occupied as an ESPN analyst.

Elisabeth is no spokesperson for either party since she chooses what to support by herself. For example, she is actively encouraging breast cancer awareness, and during her work on ABC, she defended foot fetishes.

In 2018 Hasselbeck’s estimated net worth equaled to $16 million.

The books written by Elisabeth Hasselbeck reflect the things that are the most significant in her life. As a person successfully coping with celiac disease, she chose the issue of gluten-free food as a topic for two of her works. The third one came out very recently and revealed the actual life behind the scenes of The View. Retirement gave Elisabeth enough time to process and reflect on what bothered her during her hosting career. So Point of View once and for all dots the I's and crosses the T’s in every rumor that has ever popped up.