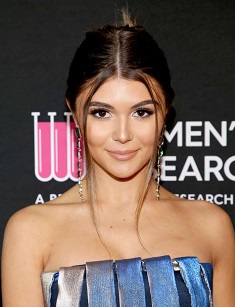 Olivia Jade Giannulli is an American internet celebrity who is popular for her YouTube and Instagram profiles; she is called a modern beauty influencer. She also has famous parents, who are involved in the field of fashion and acting.

Olivia was born in Los Angeles in 1999. Her mom, Lori Loughlin, is an actress that is mostly known for her role in Fuller House and model and her dad is a designer Mossimo Giannulli who has a clothing company named Mossimo. Olivia also has an older sister, Isabella Rose, who is occupied in the acting field, and an older half-brother, Gianni Giannulli. Isabella is almost Olivia's age, and they are rather close. Isabella sometimes appears in some of Olivia's YouTube videos, and she also has her own fashion blog named Because I’m Bella.

Speaking about influence, Olivia always claims that it was her parents who inspired her to do something connected to fashion, trends, cosmetics, they shared their knowledge and experience with their daughter, and she is really grateful for that now.

Olivia graduated from Marymount All Girls Catholic High School in Los Angeles, California, and then went to the University of Southern California, with which there was an unpleasant situation that involved the whole Olivia's family. About this, you can read a few headlines below.

For now, Olivia has a net worth of $500,000; she earns her money from the collaborations with some cosmetics and fashion brands.

She started her internet career when she was at school. Everything began with her lifestyle YouTube channel and then her Instagram account. Various brands wanted to work with her and Olivia’s advertisement company started developing. She has been working with Sephora, Princess Polly, Unilever's TRESemmé, Dolce & Gabbana, Marc Jacobs Beauty, Smashbox Beauty Cosmetics, and that’s not the end of the list.

Giannulli has a YouTube channel with almost 2 Million followers. In her videos, Olivia makes overviews on some cosmetic products such as Sephora palette with nude colors, shares her emotions about the gifts she gets, for example, a diamond ring for her 18 years, talks about her usual life and some events like her birthday party. Also, she demonstrates some useful outfits, shows how to create a great make-up like celebrities do, and arranges some public talks with her friends, for instance, David Dobrik, a famous YouTuber too.

Olivia’s channel even became a part of the list called “Ones to Watch," created by People magazine.

According to the accusation by the United States Government, in 2018 Olivia’s parents became a part of the college admissions bribery scandal. It is a massive scandal in the United States that has been going from 2011 to 2019. The thing is that parents paid a lot of money to the college admissions counselor who arranged the fact of their children’s’ admission to the top universities.

All started with Olivia posing for a photo on an indoor rowing machine which, eventually, became a part of her application to the University of Southern California (USC), a private research university in Los Angeles, with the statement that she was a competitive rower, but, in fact, she was not. Also, it is known that her parents paid $500,000 to a coach at the university to make both her and her sister Isabella athletic prospects for the team. In Teen Vogue there was a report about the possibility that Olivia had not known about this scheme.

Olivia had been actively giving some advice on applying to universities to her social media followers before the FBI arrested her parents on fraud charges for their alleged involvement in the conspiracy. In March 2019, it was reported, that, when news of the scandal broke, Giannulli was in the Bahamas on Rick Caruso's yacht. Caruso is the chairperson of the USC Board of Trustees, and Olivia is his daughter’s, Gianna, friend.

After this scandal, some brands such as Sephora and TRESemmé that used to collaborate with Olivia refused to continue working with her. There were also rumors that Olivia had dropped out of the University of Southern California because of fears of being bullied, but, eventually, a university spokesperson had said that Olivia was still considered to enroll at the university. This question is open for now.

Olivia was called “spoiled” after she shared with her followers that she entered the University of Southern California just "to party" and "to have fun" and that she would not stay here for long. Some of her fans were offended by her attitude toward education.

"Many people don't have rich parents and are ready to kill for a place in a prestigious college," wrote one of the followers, after that Olivia made an apologizing video.

In 2017, there was an unpleasant accident, a car crash: Giannulli was driving, filming the video for her followers where she shared some concerns about her issues with driving habits and, eventually, due to not paying enough attention, she was hit by another car that was going with a too high level of speed. Fortunately, Olivia wasn’t injured much.

Although Olivia is a media social person, there was not enough information about her love life. After the bribery scandal at the beginning of 2019, it was found out, that young celebrity actually is in relationships with Jackson Guthy. Her boyfriend is 23 years old, and he is a singer and songwriter. It is still unknown, how long these two has been dating, but that’s adorable – the fact that such young people can hide their true love from paparazzi.

By the way, Olivia Jade is usually called without her last name, Giannulli, so she is often confused with another Olivia Jade, whose last name is Attwood, she is a model and social media celebrity too (most famous for her Instagram and Twitter). Sometimes, Giannulli is also confused with Jade Olivia, an actress who has been dating Tom Felton.

At present, there's no certain information about Olivia Jade's net worth.