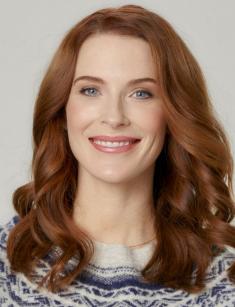 Nature generously endowed this actress with beauty and talent, who pleases millions of her fans around the world. Bridget Regan became famous after the role Kahlan Amnell in the series Legend of the Seeker, which had success from 2008 to 2010. Regan shone on the small screen in such projects as White Collar, Beauty & the Beast, Jane the Virgin for a long time. Among her works are known the independent film The Babysitters and the box office blockbuster John Wick.

It is not much known about the girl's childhood biography. It is only known that her acquaintance with the world of dramatic art began at a young age. Bridget played as a girl in the productions The Wonderful Wizard of Oz, Joseph and the Amazing Technicolor Dreamcoat at the theater La Paloma in California.

"I went to the theater school in North Carolina, this institution was focused on the theater, especially on the classical theater. Therefore, as long as I can remember, I always wanted to be an actress," Bridget once told reporters.

After school, she entered the University of North Carolina School of the Arts. She took acting lessons from the famous artist Gérald Frydman. After graduating from high school, Regan went to New York, dreaming of a theatrical career. Her Broadway debut took place on March 21, 2005, in the production Children and Art. In subsequent years, she played in several performances, combining stage and film work.

The beautiful brown-haired woman with bright blue eyes was noticed by television producers and was invited for a short role in the episodes. The first series was Law & Order: Criminal Intent, in which Bridget received a significant role. The girl played the agent Claudia Shankly in the sixth season.

A little later, the viewer saw a favorite actress in the series The Black Donnellys, which tells the story of 4 Irish brothers, who are forced to work for the boss of the New York criminal group. Regan played a minor role. Her character Trish Hughes appears in 4 series of the project.

2008 is a good year for the actress in all respects. Bridget appeared in the big premiere of the year, the film Sex and the City, which was a continuation of the cult series and was expected by an army of millions of fans. Regan appeared as a waitress in one episode but was very inspired by this work on the same site with such stars like Kim Cattrall, Jessica Parker and others.

Bridget had the main role on the small screen that year. The girl began to star in the fantasy series Legend of the Seeker, which is based on the works of Terry Goodkind from the series Sword of Truth. In the center of the plot, there is the eternal struggle between good from the bad.

Richard Cypher is on the side of the first force, who is the main protagonist, Darken Rahl is his antagonist. Richard, who was played by Craig Horner, helps Kahlan Amnell, she is a sorceress with the status of the Mother Confessor, performed by Bridget Regan. Her opponent is the helper of the Darken – Cara Mason (Tabrett Bethell).

The fascinating plot of the series kept the ratings of the project for two seasons. And although critics remained dissatisfied with the game of the main characters, the success of the series raised Bridget and Craig to the rank of young TV stars. Regan had a lot of offers and since 2011, she decorates with her game many favorite TV projects: NCIS: Los Angeles, Person Of Interest, Perception, Sons of Anarchy.

In 2013, she played the main role in the 5th season of the crime drama White Collar. Her character is an agent and therefore appears under two names – Rebecca Lowe and Rachel Turner. The main character of the series is the adventurer Neal Caffrey, who was fascinated with the beauty of the spy. Viewers watched the short affair of the offender and women almost the whole 5th season.

After this work, Regan went to Hollywood on the set of the action movie John Wick with Keanu Reeves in the main role. The star actor acted as the producer of the film. His hero is a former assassin, avenges his ex-employer, destroying the mafia syndicate, which he helped to create. Events take place at the hotel, Regan played the hotel barkeeper Addy.

The actress began acting in the comedy series Jane the Virgin the same year. The story of a religious Latin American girl Gina Rodriguez is in the center of the plot, who was the victim of accidental artificial insemination. It turns out that the father of the unborn child is a young rich man Rafael, who has a crazy wife, sister and stepmother-lesbian (Bridget Regan).

The role of fatal beauty is often found in Regan's filmography. She appears in the image of the Soviet spy Dottie Underwood in the series Agent Carter (2015), who works for the secret organization "Leviathan." The set stayed for one season and was closed because of low ratings.

However, Regan was immediately offered a similar role of a former employee of the naval intelligence Sasha Cooper in the post-apocalyptic drama The Last Ship (2016), whose heroes are fighting against the virus that destroys the planet.

The series Legend of the Seeker brought to the actress not only popularity but happiness in her own life too. The woman met with assistant director Eamon O'Sullivan on the set in New Zealand, who soon was her husband.

The couple has two children – the daughter Frankie Jean O'Sullivan (2010) and the son Bernard Moon O'Sullivan (2018). Childbirth did not spoil the beautiful figure of the celebrity: the actress is slim (she is 5,7 feet (175 cm) tall) and attractive. You can see her photos on her "Instagram": the star poses in a swimsuit and tight cocktail dresses and even topless, breastfeeding her son.

Now the actress performs in the series The Last Ship and Jane the Virgin, in which she has regular roles. She admits in an interview that she misses the stage, singing and music. Bridget Regan's current net worth is $2 million.

"Theatre, unlike television, is a more intimate form of art, it is a special mystery and a creative process," the artist says.

Regan hopes that her theatrical career will continue. In 2019, fans of the actress enjoy her game in the adventure series MacGyver.