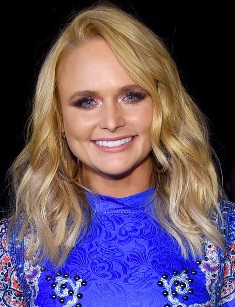 Miranda Lambert was born in 1983 in Longview Texas. Her career in music began with her release of a self-titled album and a third-place finish on television program Nashville Star in the early 2000s. Following her Kerosene, her platinum major label debut, she received commercial success and critical praise for her follow-up albums like Crazy Ex-Girlfriend, Platinum, and The Weight of These Wings. Lambert has been married to fellow country singer Blake Shelton for four years.

Miranda Leigh Lambert was born to Rick Lambert and Bev Hughes on November 10, 1983. She was born in Longview, Texas and raised in Lindale, Texas. She has a mix of English, Irish, and Native American ancestry and was named after her great-grandmother, Lucy Miranda.

Her parents met in a camp at the Southern Methodist University. Bev was attending the camp and Rick was an on-campus undercover narcotics officer. They got romantically involved a few years later. Rick used to play for a country-rock band called Contraband in the 1970s before becoming a Dallas police officer. Rick and Bev would later become private detectives together. Miranda began to help out with some of the cases by age 6. Eventually, an oil crisis would dampen the economy in Texas. Her family lost everything as a result.

Things got better for the Lambert family as the economy stabilized. Her parents opened a faith-based ministry. They also opened their home for victims of domestic violence. These experiences inspired Miranda to make her music, like “Gunpowder & Lead”.

Lambert’s professional singing debut was in “The Texas Pride Band”, which she joined while still in high school. She was also in the Reo Palm Isle house band in Longview, Texas. The venue has a long history of famous performers including Brooks & Dunn, Willie Nelson, and Elvis Presley.

Lambert competed in her first country music talent show at age 10. She performed on the weekly variety show Johnnie High’s Country Music Revue in Arlington, Texas. The same show was the launch point of many other country music names such as LeAnn Rimes and Lee Ann Womack. Following another appearance in another talent contest, Lambert then appeared in a commercial and “Slap Her... She’s French”, a teen comedy in 2001.

Lambert learned how to play the guitar from her father and wrote her own songs with inspirations from other singer-songwriters like Emmylou Harris. At 17 years old, she started her own band called Texas Pride while still in high school. To pursue her music career, Lambert graduated early from school and went straight to music.

With support from her family, she released an independent self-titled CD in 2001 which her family helped to promote. Two years later, Lambert passed the audition for Nashville Star, a country music reality show. She moved to Nashville for a chance to win a recording contract.

She finished third, which led to a major label contract with Sony Music. In a statement on her website, she said that she didn’t compete to win. The winner had to make albums immediately and she wasn’t ready at the time.

Lambert released her single “Me and Charlie Talking” in 2004. It was an upbeat song of puppy love which became a small hit. Following that, she released Kerosene in 2005. She would then go on tours with Keith Urban and George Strait

Kerosene went straight to the top of country music charts. Its fiery lyrics drew in many country fans. Lambert once said that she doesn’t write about religion, children, or happy days, that she grew up on cheating, drinking, and bad romances. The album sold more than 1 million copies and received positive reviews from many critics, The New Yorker and Rolling Stone among them. The album led to Lambert receiving nominations for several awards in the Academy of Country Music (ACM), including the award for Top New Female Vocalist.

Meanwhile, Lambert released Crazy Ex-Girlfriend in 2007. It quickly rose to the top of the country album charts and got to No. 6 at the Billboard 200 charts. The album featured music on a wide spectrum of topics. The title track became a theme song for the many former girlfriends of the world. She sang about a woman’s plans to kill her abusive partner in “Gunpowder & Lead”. A woman’s lover leaves her for his old girlfriend in “More Like Her”.

The album sold very well and earned Lambert a lot of critical attention. Lambert won the ACM’s top new female vocalist award and Crazy Ex-Girlfriend won the ACM award for Album of the Year. In the same year, Lambert received a nomination for the Grammy Award for Best Female Country Vocal Performance for her single ‘Kerosene’.

In 2009, Lambert released the album ‘Revolution’, which featured a more romantic side to her albums with songs like “Love Song” and “Making Plans”. The album featured songs co-written with her then-boyfriend Blake Shelton. In 2011, Lambert released Hell on Heels together with Angaleena Presley and Ashley Monroe, known together as Pistol Annies. In the same year, Lambert released her solo album Four the Record.

'Platinum' & 'The Weight of These Wings'

Lambert released Platinum in 2014 with hit tracks like “Somethin’ Bad” and “Automatic”. The record also received many awards, including the CMA awards for Single of the Year and Album of the year as well as a Grammy Award for Best Country Award in 2015.

Following her release of the single “Vice” in July 2016, Lambert released ‘The Weight of These Wings’ in the same year. The album became her fifth album to win the ACM Album of the Year and her sixth album to get a platinum certification.

In 2011, Miranda Lambert married fellow country star Blake Shelton. They swiftly gained popularity as country music’s superstar couple. The couple received and diverted many rumors on their relationship issues. The couple announced that they were getting a divorce in July 2015 after four years of marriage. They jointly asked for privacy and compassion as they managed the divorce.

Lambert then dated R&B singer Anderson East for two years. She would then continue to marry Brendan McLoughlin, a New York City police officer, on January 26, 2019.

Lambert has received significant critical praise and popularity for her consistently strong albums and singles. According to Celebrity Net Worth, her estimated net worth is at about $45 million.