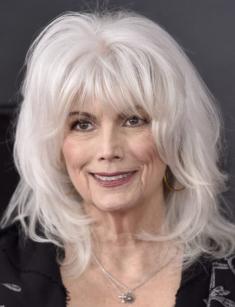 In her young age, Emmylou Harris sacrificed by her education to put a dream of becoming a music star into reality. She is known for music projects related to sharp issues, such as social and gender inequality, environmental problems, care for our planet. Harris has been a member of various music collectives but ended up performing solo – let’s know what successes she has managed to reach!

Emmylou Harris was born to a family of military people. While taking part in war actions held in Korea in 1952, soldiers lost their colleague – Harris' dad. As it was later revealed, he was taken prisoner and managed to escape almost one year later. Emmylou was raised according to Christian canons.

Speaking about her education, Emmylou Harris started getting a degree in drama. While at university, she became interested in music, learned to play the guitar and performed songs by famous artists of that time. Interestingly, the future star didn't complete her bachelor's degree – she left the educational establishment for the sake of concentrating more on her music career. So, young Harris began giving concerts with a local music group at most crowded pubs and served there as a waitress at the same time to earn a living.

Around that time, she was noticed by two famous music collective - Flying Burrito Brothers and Fallen Angels (created by the musician Gram Parsons.) Both the sides offered Harris to collaborate, and she gave preference to Parson's group. She became a lead female vocalist and embarked on a tour with the band in 1973. Besides, they took up elaborating the collections entitled ‘Grievous Angel’ and ‘Sleepless Nights.’ However, Parsons couldn't witness the album's release – he was found dead in a motel room because of a drug overdose. So, the project was published posthumously.

Some time later, Emmylou Harris got acquainted with a music producer who helped in releasing of her collection named ‘Pieces of the Sky’ – it came out in 1975. Rodney Crowell, a rising star of that time, also contributed to the project by creating the song ‘Bluebird Wine.’

Harris wanted to work with a famous recording company who made her a condition – she had to form a music collective. So, she referred to James Burton, Glen Hardin, John Ware, and two other musicians to do so – their band got the name The Hot Band. In 1976 the woman left it.

In 1975 Harris dropped the album named ‘Elite Hotel’ – it was recorded in a rock style. Fans especially liked its songs ‘Wheels’ and ‘Sin City.’ The project happened to be an immense commercial success, advancing to No. 1 on Hot American Albums Chart. It also brought her the Grammy nomination.

Meanwhile, the singer was featured in other musicians' projects. So, she contributed to works by Linda Ronstadt and Guy Clark.

1977 brought Harris her new album named ‘Luxury Liner.’ Generally, it included covers of other artists' tracks, and she received the reputation of a cover singer.

The following year, she pleased her fans by publishing one more collection – ‘Quarter Moon in a Ten Cent Town’ – which differed from her previous works.

Her next album was titled ‘Blue Kentucky Girl’ –a pure classical country project bringing her Grammy nomination. The same year, fans could listen to Harris' new collection ‘Light of the Stable.’ Neil Young and Dolly Parton took part in its recording. That time she began working on her next album ‘Roses in the Snow’ dropped in 1980. Also, her song ‘That Lovin' You Feelin' Again’ recorded alongside Roy Orbison got to the top of American Hot Charts.

Speaking about Emmylou Harris' most recent works, she presented her album ‘Stumble into Grace’ in 2003. Majorly, it consisted of the songs Harris wrote by herself. Besides, Emmylou partnered with Don Williams to create the track ‘If I Needed You’ and with Bob Dylan while recording ‘My Blue-Eyed Jane.’

In 2005 the celebrity performed at a charitable concert aimed to help people who had suffered from Hurricane Katrina. Besides, the same year she collaborated with Conor Oberst on a couple of projects, embarked on a tour arranged by Elvis Costello and was featured on ‘Prairie Wind.’

2006 brought her appearance in the picture Neil Young: Heart of Gold. Moreover, she presented the collection ‘All the Roadrunning’ recorded in partnership with Mark Knopfler – the two eventually organized a tour together around European countries and the United States. The project brought them commercial success and new fans worldwide.

In 2008 the picture Nights in Rodanthe used Harris' single ‘In Rodanthe.’ The year 2008 was also marked by Harris' solo collection ‘All I Intended to Be’ featuring such artists as Dolly Parton and Phil Madeira.

In 2011 the woman pleased her fans by dropping the album ‘Hard Bargain.’ Remarkably, the work became her best project in terms of sells' level. Additionally, that year she worked alongside the music collective The Low Anthem on the track ‘To Ohio’ and Nick Cave on the song used by Lawless.

Speaking about Emmylou Harris' relationships, she has had several husbands. 1969 was marked by the beginning of her first marriage with Tom Slocum. The two welcomed a daughter named Hallie and parted ways in 1970. Seven years later, Harris shared vows with a new partner Brian Ahern. In 1979 they became parents of a daughter Megan Ahern. However, in 1984, the spouses officially annulled their marriage.

In 1985 she married her boyfriend Paul Kennerley. They split up in 1993. Emmylou Harris has several grandchildren.

The woman has always been known for her active social position. She is involved in popularizing feminism movement through her creativity. Besides, she partners with organizations aimed to raise awareness of the global landmine problem. Moreover, Harris is against violence towards animals. The celebrity opened a shelter for unwanted animals located in Nashville.

Emmylou Harris' net worth is evaluated at $16 million. Generally, she earned money for her music and appearing in various brands' commercials.