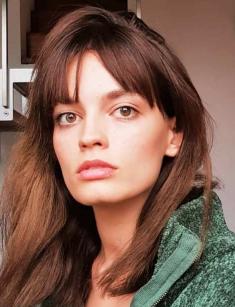 The actress of Franco-British origin Emma Mackey shows high ambition and determination despite her young age, she was engaged in a theatrical circle and took acting lessons in different workshops to master the profession regularly from an early age. Despite the fact that she was mistaken for a Hollywood blonde Margot Robbie at the very beginning of her career, Emma managed to find her face, world fame and a crowd of loyal fans.

Emma Margaret Tachard-Mackey was born on January 4, 1996, in the small French town Le Mans. Her mother Rachel is British by nationality, a well-known public figure and philanthropist by profession and her father Philip is a Frenchman and a director of the school. The girl grew up in the picturesque Sablé-sur-Sarthe and received her Baccalauréat in literature at The University of Nantes in 2013.

Emma moved to her mother's hometown in the UK, where she entered The University of Leeds in the theater department immediately after graduating from high school. The girl took an active part in the productions of the student theater troupe at the same time with training activities. She played in plays and directed them. Mackey decided to be engaged in acting professionally at this point.

Before she tried her first auditions in the movie, the girl worked as a model for one of the best British clothing brands for some time (despite the low growth of 5,1 feet (157 cm) and weight 121 lbs (55 kg)) due to her attractive appearance and slim figure.

The creative biography of the aspiring actress started in 2016 after she passed the casting successfully and received her debut small role in the horror film Badger Lane directed by Shay Collins. The plot tells the story of a team of inexperienced journalists, who faced many mystical phenomena during the filming of an abandoned brick factory.

The colleagues of the heroine were little-known British artists Sam Andrews, Nicholas Egunjobi, Phillipa Lois-Anamoah. The film was shot in the favorite cinematic genre of pseudo-documentary, which implies shooting "with hands" or hidden cameras so that the audience created the effect of the reality of what is happening on the screen.

The horror film received the award for Best Cinematography at the ceremony of The National Student Production Awards in 2016. Also, critics appreciated Badger Lane positively and noted appreciation for creativity.

The next appearance of Emma Mackey on the big screen happened two years later. She starred in the dramatic film Summit Fever together with the actor Freddie Thorp. The film tells the story of two climbers, who decided to conquer 3 the most dangerous Alpine mountains - Mont Blanc, Matterhorn and Eiger to set a new world record. The drama about daredevils found its audience in Britain but remained little known to other countries.

2018 was a turning point in the creative life of the girl, she signed a contract with the American company Netflix, producing favorite movies and TV series. She starred in the comedy-drama series Sex Ed, telling the story of two school friends, who have some problems with communication. They come up with the idea to create a secret association, the purpose of which is to help their peers to solve their strange and awkward problems.

Emma Mackey turned into the main character named Maeve Wiley, a "bad girl," who is a social outcast at school. Her best friend was played by the young British actor Asa Butterfield, known for his roles in the films The Boy in the Striped Pyjamas and Miss Peregrine's Home for Peculiar Children. And the mother of the main character and sex therapist was performed by the legendary American actress Gillian Anderson, who became famous for the role of Scully in the mystical series The X-Files all over the world.

The comedy and drama project Sex Ed, which was created by Laurie Nunn, was the first broadcast on January 11, 2019, on the Netflix service and gained popularity among the audience immediately.

Mackey doesn't have a husband and kids yet. She is happy with her boyfriend Daniel Whittle in her private life. Her boyfriend is not a public figure and he is a model, judging by the photo on "Instagram." Emma often puts the publications, in which she is shown without makeup and at home on the same social network. You will not find photos in a swimsuit here.

The girl is a supporter of a healthy lifestyle and vegetarianism. She is engaged in sports, does not smoke and does not drink alcoholic beverages. Also, the actress doesn't wear fur clothing from ethical considerations.

Mackey is continuously compared with the actress Margot Robbie, who became famous for the role of Harley Quinn in a fantastic action movie about superheroes Suicide Squad. The fact that the girls are very similar in appearance, they even confused by the audience sometimes.

It is evident that the actor's career of Mackey will go up the hill after the success of the series Sex Ed, and her filmography will expand with new projects. So, a new Irish thriller The Winter Lake is preparing to be released, where Emma will play the main role. Her colleagues on the set will be actors Charlie Murphy, Michael McElhatton, Mark McKenna. Emma Mackey has an estimated net worth of $150 thousand.

Also, Mackey is a part of the official cast of the 2nd season of the series. It is about the problems that concern all adolescents, accepting yourself and your orientation, identity, first love and sexual experience. It is not yet known about the premiere of new episodes of the series Sex Ed but the audience is ready to wait patiently and cheer favorite artists, playing the main roles.