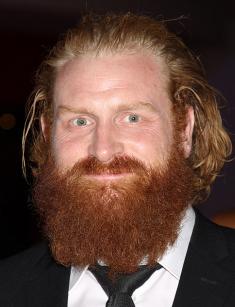 The Norwegian actor Kristofer Hivju is known for the role of Tormund Giantsbane in the popular series Game of Thrones based on George R. R. Martin’s novels A Song of Ice and Fire. The colorful and charismatic successor of the Vikings impresses the saga fans with his red beard, burning eyes, and authentic acting in battle scenes. However, the man’s activities are diverse: he writes scripts and produces movies.

Kristofer Hivju was born on December 7, 1978, in Oslo, Norway. His parents, the actors Erik Hivju and Lieselotte Holmene, did not encourage their son to choose the same career or teach him how to behave in front of a camera. As an adult, Kristofer co-starred with his father in a short movie Flax. Besides, he has another relative involved in cinematography: the French actress and director Isabelle Nanty is his cousin.

As long as the young man graduated from school, he entered the University of Oslo, School of Law; at the same time, he studied journalism by correspondence. Hivju has a trained actor, too: in 2004, he finished the Danish branch of the Russian Academy of Theatre Arts in Aarhus.

The young man began to appear in episodes of TV series when he was a student; in 2001, he received a small part in the series Fox Grønland.

The actor’s filmography includes a dozen series and short movies that are hardly known outside Scandinavia. In 2008, Hivju appeared in the thriller Rovdyr (Manhunt) by Patrik Syversen. The well-done horror with lots of blood spread all over the globe, and American agents and directors noticed the charming Scandinavian actor.

In 2011, Matthijs van Heijningen, Jr. created the action movie The Thing. As the story runs, a group of Norwegian scientists finds a frozen werewolf alien in Antarctica. Kristofer personified one of the brave explorers, Jonas. Critics appreciated the project; it was nominated for the Saturn Awards in two categories in 2012.

The failure did not impair the actor’s career. 2013 was marked with the third season of the series Game of Thrones; Hivju played Tormund Giantsbane. The giant slayer is not small: Kristofer’s height is 6 feet (183 cm.), and his weight is 182.98 lbs. (83 kg.); he is athletic and good at fighting. All in all, he made a good leader of the wildings.

According to Martin’s books, Tormund replaced Mance who used to be the head of the Free Folk. Each season was filmed for about six months; thus, the artist had time to participate in other projects.

The man had a small role in the black crime comedy In Order of Disappearance by Hans Petter Moland; the movie participated in the 2014 Berlin International Film Festival but won nothing. The same year, Hivju played a hunter in the adventure movie Operation Arctic by Grethe Bøe-Waal and Tormod in the TV series Lilyhammer.

The 2014 drama Force Majeure by the Swedish director Ruben Östlund brought the actor pretty much success. The project got the Guldbagge Awards in six categories in 2015.

The role of Mats gave the actor one of these awards. He personified a divorced man who tried to build a relationship with a younger woman.

In 2015, the notable artist played a Viking in the historical adventure movie The Last King by Nils Gaup. The story is set in the 13th century; the audience can see Kristofer wearing furs and armor. Torstein Skevla can ski quickly; he dedicatedly protects the young Norwegian king Haakon IV.

It was a surprise for The Last King and Game of Throne fans to see the actor in F. Gary Gray’s The Fate of the Furious: the story was set in the modern times, not ancient Scandinavia. The artist played Connor Rhodes, the hacker and villain who fights a lot and even kills one of the main characters.

The actor is married to the journalist, photographer, and director Gry Molvær who is eight years older than her husband. The couple has known each other for a long time. They married in summer 2015 and settled in Norway.

In summer 2017, the paparazzi took pictures of the spouses’ conflict in the middle of the street; they had been arguing for more than an hour. Judging by the photos, it looked like a drama scene.

Although the man is married and wears a frightening beard, Hivju is quite popular among Game of Thrones fans. When the artist posted an old picture with no beard, people did not understand at first that the brutal Viking used to be such a handsome young man. However, the actors of the series cannot change their appearance until the end of the project according to their contacts; soon, Tormund may transform into someone beyond recognition without his beard.

In 2017, the artist appeared in the commercial for Wyndham Rewards.

The filming of the last season of the fantasy saga began in October 2017. The actors whose characters survived through the ordeals gathered together in Belfast.

Tormund Giantsbane’s fate was a secret for fans for a long time: he could have died as he fell in the abyss with the destroyed wall. When Kristofer signed a contract for the eighth season, it became clear: the mighty Norwegian will amuse the audience in new battle scenes of Game of Thrones.

Filming was supposed to be finished in spring 2018. However, HBO changed the schedule before: certain weather conditions were necessary for some scenes. The last scenes were filmed in July 2018.

The project creators used a lot of computer graphics; it required more time. Thus, the audience had the chance to see the premiere only on April 14, 2019.

In addition to Game of Thrones, Kristofer Hivju appeared in the Columbian-Norwegian drama Mango: Life’s Coincidences. It is the story about the adventures of the small orphan who gets from Columbian ghetto to a wealthy Norwegian family. The premiere took place in 2018.