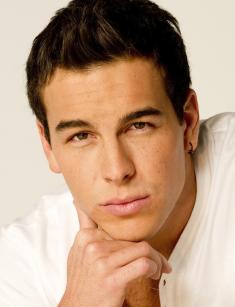 Mario Casas is a Spanish actor, the star of the widely famous movie Tres Metros Sobre El Cielo, El Barco, Las brujas de Zugarramurdi. He starrs in his native country, although he has experience of cooperation with foreign - European and South American companies.

Mario was born in the Spanish city of A Coruña in the family of a builder and a housewife. Mario has a sister Sheila, as well as three brothers – Christian, Oscar and Daniel. Except for the younger brother Daniel, who did not decide on a future profession, the other guys followed in the footsteps of his older brother and also became actors. But Sheila has a career in law.

Originally Mario did not think about the cinema. When Casas was little, the boy was attracted to the noble profession of fire and police. And Mario said that he would become a football player at the age of 7. The boy even went to the sports section of the main club of the city, "Deportivo." Who knows, maybe today the world would know Casas as a great striker but the family moved to the suburbs of Barcelona in 1994 and this football career of the boy ended.

Mario received art education at school. The young man was invited to act in commercials in high school and Casas gained his first experience with the camera. Casas moved to Madrid and entered the Cristina Rota School of Dramatic Arts at the age of 18. Photos of the young artist get to the studio, after which Mario begins to act in a big movie.

Mario Casas starred only in television series for the first time. Most of them were exclusively in Spain and outside of this country were unknown. Besides, the television series Los Hombres de Paco, which began to broadcast, when Mario become a star. The first work, which came abroad, was the melodrama of Antonio Banderas, where the actor played the role of one of the four teenage friends.

The first high-profile project was followed by the main role in the youth drama Mentiras y gordas. The film touched upon the topic of young people, who do not want to part with a carefree life. Another youth comedy, which was called Fuga de cerebros, started in 2009. The film was told about the funny situation of the school bully, who fell in love with his classmate, who enters Oxford. A high school student fakes a certificate and goes to England together with his friends in order not to miss love.

After a series of short films Paco, Mad Money, Miedo, there was a breakthrough in the creative biography of Casas in 2010. First, the film Tres Metros Sobre El Cielo was released, for which Mario was awarded many film awards. The focus is on the love relationship of a home girl and a young man with the tendencies of a bully. The movie rating was high in Spain, so it was decided to release the second part called Tengo ganas de ti.

Then there was the shooting of the scandalous tragicomedy Carne de neon of Paco Cabezas. This movie resonated because of the social themes and the fantastic divergence of opinion of the critics: Carne de neon was called tasteless and a masterpiece at the same time. The film is based on the story of a meeting between a grown son and a mother, who served time in prison.

Mario Casas attracted the attention of the directors, so it is not surprising that the actor was approved for the main role in the large-scale post-apocalyptic series El Barco. The film begins with a carefree walk on a yacht with his friends but it turns out that most of the land goes under water after the explosion of the Hadron Collider. The yacht becomes a real ark for its inhabitants.

The actor managed to star in one of the highest-grossing Spanish films of recent years, a comedic horror film Las brujas de Zugarramurdi. The theme of the Spanish myth of the existence of the Basque witches in the city, in which the heroes of the movie got, fleeing from the police.

In 2012, the artist appeared in the main role in the police thriller Grupo 7, where he played a young police officer, who faced with injustice in the system of internal organs. The actor Anthony De La Torre played his mentor, arrogant and cold-blooded guardian of order. The film caused a furor among film critics and was nominated for the Goya Awards for 16 categories.

The actor's filmography was extended with another work the comedy melodrama The Mule, where he played the main role, this film is about the relationship of a young couple, which unfolds against the background of the civil war.

In addition to local films, as well as joint movies of the Spaniards with other European film companies, Casas once participated in the creation of the South American film disaster The 33. The historical melodrama Palmeras en la nieve and the sitcom Mi Gran Noche won the audience's sympathy among the last works of the actor.

Mario Casas often has affairs on the set. So, while working on one of his first series, the actor began to meet with the aspiring star Amaia Salamanca. Then he fell in love with María Valverde, his partner in the film Tres Metros Sobre El Cielo and the melodrama The Mule. The lovers met throughout 2014 but this relationship did not lead to anything.

Later, there were rumors that Mario had a change in his personal life. The actor had a close relationship with the actresses Blanca Suárez, with whom he starred in the film El Barco and Clara Lago, the new actress in the second part of the melodrama Tengo ganas de ti.

Recently, Casas met with the actress of Ukrainian-Ethiopian origin Berta Vázquez. The girl was his partner in the film Palmeras en la nieve. But, according to the information from social networks, young people are not together now.

Mario Casas admits in an interview that he is ripe for a family and dreams that he will have three children. But it is important for the actor that his wife was not just a sensitive and gentle woman but she could accept the unusual traditions and concepts of the inhabitants of the province of Galicia because the young man reveres all old customs. Mario Casas did not meet this girl yet.

Despite his young age, Mario Casas continues to move confidently to the top of the cinematic Olympus of Spain. The actor always receives the main role in cash projects in recent years. The roles of the artist are diverse. The character of Mario together with his elder brother was on the run from the mafia in the crime thriller Toro. He starred in the role of a young businessman Adrián, who was accused of murdering his mistress, he tried to find the truth in a detective film The Invisible Guest. Mario appeared in the horror film El bar, the film told about the sudden attack on the cafe by a gang of criminals. Mario Casas has a net worth of $4 million.

In 2017, the actor diversified his repertoire with the drama Bajo la piel de lobo, where he played together with Irene Escolar, Ruth Diaz. The artist signed a contract with the creators of the thriller The Last Party, where he will play along with the Hollywood star Christopher Lambert. And in 2018, the thriller El fotografo de Mauthausen was released with Mario Casas in the title role. The actor claims that horror is his favorite genre, which proves the list of his works.