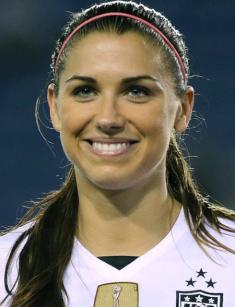 Morgan, an experienced sportsman, is performing under No. 13 on her jersey. She started preparing herself for sports career at an early age. As a result, nowadays she is included in the list of women representing America at international competitions. Besides, she has been mixed up with recent loud scandals related to Trump and Megan Rapinoe. What should you know about the woman? Read it in the article!

Alex was not the only child in the family – she was brought up alongside two sisters. The girls were interested in sport from the very infancy – their dad’s love for football influenced their personalities hugely. The sisters liked spending time with each other playing active games and practicing.

From early age, Morgan got the reputation of a brilliant athlete. She could spend the whole day at a local gym or playing football with friends outside. While attending a high school, she demonstrated her high velocity – she was the best sportsman amongst her school teammates in terms of endurance and speed.

As for Morgan's education, she has received a bachelor's degree in politics.

Having turned 14, Alex Morgan became a member of Elite Team – it was her first entry to club soccer.

Due to her excellent physical training, being a 17-year-old girl, Morgan entered the women's American soccer team. However, a severe injury prevented her from performing with the squad until spring 2008. Besides, she became a member of numerous squads of Olympic Program.

While at college, Alex Morgan began fighting for California Golden Bears. During her first college year, the sportsman got to the third place in a competition for the Hermann Trophy.

2008 brought the player her first international performance. So, she was seen at the Women's Tournament which took place in Mexico. Having faced the team of Cuba, Morgan registered her debut international goal. The same year, Morgan performed at the World Cup. She led her team to the victory, and her goal was named one of the best ones in FIFA history. Moreover, judges unanimously gave Morgan title of the second-best player of the championship.

Alex Morgan's professional international career got started in 2010. Then she advanced to senior American soccer team replacing an injured player in the match against Mexico. Several months later, she replaced a sportsman again – she performed against China and registered a brilliant international goal.

In November of the same year, having faced Italian squad, Morgan recorded a perfect goal advancing her team to the final games of the World Cup.

The following year, Morgan applied for participation in the Draft where was selected by Western Flash. Performing for the franchise in 2011, Morgan made in total five goals in 15 matches. As a result, the team became the winner of that season and autumn Championship.

As a 22-year-old sportsman, Alex was the youngest one performing for the United States during the World Cup in 2011. That time the national team finished second receiving a silver medal. Fighting in the final games against Japan, Morgan registered one of the best FIFA goals ever.

The following year brought her membership in Seattle Sounders Women. She contributed to her team's stats hugely – due to Morgan's goal in the match against Canada, the squad advanced to the final of Summer Olympic Games. Subsequently, they received the title of winners and a gold medal.

Totally, in all the matches held in 2012, Alex Morgan registered 30 goals and 25 assists. It brought her the precious award - Athlete of the Year.

That time Morgan joined Portland Thorns. The franchise traded the player in 2015.

Speaking about Morgan's recent sports performances, she took part in the World Cup in 2019.

Alex Morgan’s net worth is evaluated at $10 million. Speaking about her annual salary, the woman earns near $50,000 per year. Majorly, she earns money for partnership with various companies. Remarkably, once the woman made public announcement – ‘I think the fact male sportsmen earns much more money than female ones do to be unfair.’ According to Alex, women deserve salary increasing cause they contribute to national health positively showing young generation pluses of doing sports.

Apart from sports, Alex Morgan is keen on other activities. So, she is a co-author of children’ books.

Besides, she has partnered with numerous sport and other brands such as Adidas, Nokia, Pepsi Cola, etc., was featured in their commercials.

Speaking about Morgan's relationship, she has a husband named Servando Carrasco – also an experienced sportsman. He was her long-time boyfriend. The spouses got acquainted at one of the matches they played in the 2010s. After dating each other for four years, the two arranged a wedding in 2014. The couple doesn’t have children yet, but Morgan once said in an interview she wanted to have a daughter.

Interestingly, Morgan has a nickname ‘Baby Horse’ – her pals came up with that name because of Alex's velocity and unusual style of running.

The sportsman is a vegetarian. Initially, she started keeping a vegetables diet but later made it her lifestyle.

Morgan has a best friend – Tobin Heath. They know each other for more than 10 years.

The woman was mixed up with a scandal between Donald Trump and her teammate Megan Rapinoe. So, in summer 2019 the latter said she would not visit the White House after their victory of the World Cup. Morgan supported Rapinoe. According to her, the squad is like a big family – they always make decisions together, through discussions.

Interestingly, Morgan once shared she did meditation every day to relax, forget bad news and feel better. Morning meditation is a guarantee of a positive and productive day.