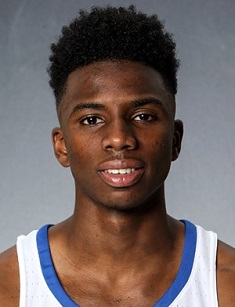 Hamidou Diallo is an American basketball player who has already established a name for himself in the field f professional basketball. He has a 2-year contract with the Oklahoma City Thunder of the National Basketball Association (NBA). He used to play basketball for the University of Kentucky under the Kentucky Wildcats. He was widely considered a 5-star prospect as well as one of the best players in the class of 2017. Diallo won the 2019 NBA Slam Dunk Contest.

While Hamidou Diallo shares the same last name as fellow NBA player Cheick Diallo, the two are not related in any way. Hamidou was born in Queens, New York and traces his ancestry to Guinea, Africa. On the other hand, Chieck was born in Mali, Africa.

Hamidou Diallo was born in Queens, New York on July 31, 1998. His parents are Marima and Abdoulaye Diallo, both immigrants from Guinea. He had a profound love for the game since childhood and recalls how he used to play in a fenced-in court in their neighborhood.

The young Diallo could not wait to grow up to get the chance to play against some of the older kids of the neighborhood. This passion for basketball led him to pursue it as a career choice starting with playing for his high school team.

Throughout his freshman and sophomore years, Diallo attended John Bowne High School in Flushing, New York. He averaged 17.1 points, 6.6 rebounds, and 2.7 assists per game as a sophomore. In the summer of 2015, Diallo played in the Under Armour Association Circuit for the New York Jayhawks, an AAU team. In the 2015 Under Armour Association circuit, he got 22.5 points and 5 rebounds per game on average. He was then invited to the NBPA Top 100 camp and Adidas Nations camp later in the summer of the same year.

Before he became a Junior, he moved to Putnam Science Academy in Putnam, Connecticut. He led Putnam to a 35-7 record with 17 points and 4 rebounds per game on average. Diallo joined the New York Rens, an AAU team, in the summer of 2016 for the Nike Elite Youth Basketball(EYBL) League Circuit. He led the Rens to the season-ending Peach Jam with an average of 18.6 points and 2.1 assists per game.

Diallo decided to attend the University of Kentucky on January 7, 2017. He entered late into the program, so he could not enter the season under the Kentucky Wildcats. He instead spent his time practicing with the rest of the team. Despite not playing a single game for the entire season, he was still included as one of the 182 players listed in the 2017 NBA Draft.

In the 2018 NBA draft on June 21, 2018, Diallo was selected at the 45th pick by the Brooklyn Nets. The rights to his draft were then traded multiple times, first to the Charlotte Hornets, then to the Oklahoma City Thunder after that. The Thunder announced Diallo’s contract signing on July 28, 2018.

Diallo later entered the NBA Slam Dunk Contest on February 16, 2019. He became the first player from the Oklahoma City Thunder to win the competition. He had Shaquille O'Neal standing straight with his head down. He then jumped over O’Neal and do the “honey dip”, a dunk popularized by Vince Carter. With his arm still hanging on the rim, he ripped through the middle of his jersey with his free hand to reveal an undershirt with the Superman logo. For another dunk, he had American rap artist Quavo hold the ball over his head. Diallo then jumped over Quavo and finished the dunk with two hands.

In 2016, Diallo would also competed for the under-18 United States national basketball team for the FIBA Americas Under-18 Championship game. The team finished gold in the tournament. The team would then finish gold in Egypt at the FIBA Under-19 Basketball World Cup.

Hamidou Diallo’s parents, Marima and Abdoulaye, are immigrants from Guinea, a country in West Africa. The two would settle in Lefrak City, an area filled with high-rise apartments in the Corona section of Queens, New York. Hamidou was born here. To support four children, his father worked as a cab driver and his mom worked as a hairdresser.

Hamidou stands at 6 ft 4 in (1.96 m) and weighs 198 pounds (90 kg). While his weight seems lacking when compared to his competition, it grants him added flexibility on the court.

Diallo has earned $838,464 so far out of his entire NBA career. He owns homes and cars among his personal assets. He also earns a significant amount of money from various sponsorships.