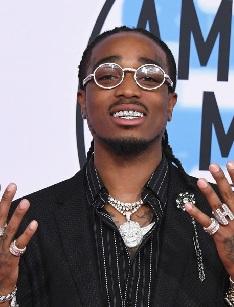 The Georgia native, performing under the stage name “Quavo” has a real name of Quavious Keyate Marshall. He is the co-founder of the rap group Migos and its current member. He is a relative of other Migos’ members Offset and Takeoff. Quavo is a well-known outstanding rapper. Apart from his projects with Migos, he began developing his solo career in 2014, released his first solo track as a featured artist “What Are You Thinking”.

Quavo collaborated with Drake, Meek Mill, 2 Chainz, etc. Quavo was named most influential rapper by the online hip-hop appreciation network called Complex Music in 2014. He also starred as himself in Donald Glover’s TV series Atlanta (2016). Quavo and Travis Scott formed a hip-hop supergroup called Huncho Jack and released an album in 2017 titled “Huncho Jack, Jack Huncho”. Quavo has a net worth of about $16 million.

Born in Athens on April 2, 1991, Quavious was brought up by his mother along with his nephew Kirsnick and his cousin Kiari. Quavious’s mother worked as a haircutter. As a kid, Quavious lost his father and his family became incomplete. Quavious studied at Berkmar High School, located in Lilburn, Georgia. Before Migos he was a sports fanatic and played football as a quarterback. In seventh grade, he began interest hip hop.

The rapper was promising enough to go from backup to starter during his tenure. His former coach said that Quavious didn't have a lot of meat on his bones, but he was a competitor and a good football player. The Berkmar Patriots went 1-9 during that 2009 season. Quavious was very smart on the field, understood the offense and how to read the defense. Marshall was a great teammate, always joking, having a good time.

The same time Quavious started interested in music. He wrote his own songs and created an alias, which is currently well-known. Quavious dreamed of being a professional musician. He decided to drop high school out and to start a professional musical career. So, he and his relatives Takeoff and Offset formed very popular local group Migos in 2008.

Following the success of Migos, Quavo made some guest appearances on a lot of popular songs, including “Congratulations”, “Strip That Down”, “I’m the One” and “Portland”. At the same time, Migos announced their new the mixtape called “Back to the Bandon”. In January 2017, Migos issued their third studio album “Culture II”.

Quavo released three singles as a featured artist: “Workin Me”, “Lamb Talk” and “Bubble Gum”. He was nominated several times for various awards. He won a 2017 Teen Choice Award, and a 2017 American Music Award. He also received nominations for the “BET Awards”. In October 2017, Quavo hopped on Colombian singer Karol G’s Bad Bunny-assisted banger “Ahora Me Llama” for the remix.

In April 2018 Quavo stopped by the 2018 Billboard Latin Music Awards to help the singer with a live performance of the track. Sitting on a white chair, Quavo rapped his verse as Karol G danced seductively next to him. On the red carpet, Migos’s member also flashed his jewelry which featured rings that read “HUNCHO” across his hands.

“Huncho” is the part of Quavo’s first solo album title. It was called “Quavo Huncho” and released in 2018. The rapper announced on his Instagram that in the album there would be Davido, Drake, Cardi B, 21 Savage, Travis Scott, Kid Cudi, and Saweetie as featuring artists. Quavo performed with Madonna at Eurovision 2019.

Quavious stays single. He is not married and hasn’t got kids. The rumors said that he was romantically involved with American model and socialite Karrueche Tran. Before that, Quavo was in a relationship with Lira Galore. His girlfriend was an American adult and glamour model. They started dating in January 2016 and broke off after a year of a relationship.

In 2018 the Internet thought Quavo looked like a young disco Steve Harvey. Steve even made a show’s episode, where he discussed that opinion. In 2019 it became popular to portray Migos’s members, especially Quavo, as cartoon. On the troller.us you can even find Quavo Cartoon Drawing collection.

Quavo loves the sport of basketball and enjoys attending games for the Atlanta Hawks often. In February 2019 he experienced what it was like to be a real super fan. While sitting courtside for the Hawks' game against the Lakers, Quavo proved that he has no shame in his fandom game.

Quavo not only cheered for the Hawks, but he also shot a T-shirt cannon to give away goodies to members of the crowd. Quavo was included in the roster of celebrities’ team at NBA All-Star Game in 2018 and 2019. In 2018 he was recognized as MVP.

In 2015 Quavo was arrested during the Migos’s concert, which held at Georgia Southern University. Quavo was accused of illegal possession of drugs and weapons. Soon he was released by paying a fine. He denied all charges and was sentenced to 12 months, canceled soon.

Quavo has released one own studio album, one collaborative album, 29 singles, and 33 other songs. Also, he issued three studio albums and 12 mixtapes in Migos.

Singles as a lead artist: