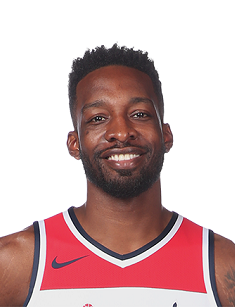 The Maryland native, Jeffrey Green started a basketball career in NBA in 2007, as a rookie of Seattle SuperSonics (Currently Oklahoma City). He plays at a power forward and small forward positions. Green was playing for eight franchises: Thunder, Celtics, Grizzlies, Clippers, Magic, Cavaliers, and Wizards.

Jeff signed with Utah Jazz in July 2019 and will start next season in its roster. Also, Jeff is a happy husband, and a father of two daughters. He has a net worth of $20 million. Furthermore, he has made $75.5 million career earnings, playing over 11 seasons in the NBA.

The birthplace of Jeffrey is Cheverly. He was born there on August 28. Jeffrey’s parents didn’t live together. However, little boy spent much time with them. Father began to teach him to play basketball from an early age. Jeff was quite good at it, all thanks to the senior Green’s genes as his father was a high school all-league guard. Jeff didn’t have a brother, with whom he could play. That’s why he often played the game with his father on playgrounds.

By the time Jeff Green was entering high school, he was already making a name for himself. He entered the local Northwestern High School. There he was notably scouted by several high profile college programs. In his senior year, Green was able to lead Wildcats to the 2004 state basketball championship before accepting an offer to attend Georgetown University.

Jeff became the key member of Hoyas from his first days. His duet with Roy Hibbert was one of the strongest in the league. Hoyas’ head coach called Green the smartest player he had ever coached. In his debut season, Jeff was recognized as the best rookie of the Big East conference. Next season Jeff became the best player of the conference and received a selection to dream team along with Roy.

In 2007 Jeff helped his college to win their first tournament since 1989 and won the MOP award. It allowed Hoyas to receive the automatic bid to the NCAA Championship. The outstanding game of Hoyas’ tandem during March Madness 2007 led the team to the NCAA Final Four, where Hoyas were defeated by Buckeyes. It didn’t prevent Green from going on the 2007 Draft. Jeff graduated from the university in 2012.

Jeffrey appeared in NBA as the fifth number of 2007 Draft. Boston Celtics selected him and traded the rights on him to the Seattle SuperSonics the same day. The rookie from Cheverly signed a two-year $6.35 million contract with them and joined the second number of the same Draft, Kevin Durant. Green spent his rookie season rather good. He appeared in 80 games; his stats were 10.5 points, 4.7 rebounds and 1.5 assists on average per game.

He was included in the list of the five best rookies of the season. Also, he scored 35 points in one game. Next season there were major changes in the team. SuperSonics became the Oklahoma City Thunder. Russell Westbrook joined Jeff Green and KD. On October 16 OKC exercised $3.52 million option for the 2009-10 season.

In January 2009 Jeff buried the Golden State Warriors, 122-121, with a 16-foot bank shot from the right wing that fell through the net as time expired. Green’s first career game-winner also went down as the first in the Thunder’s short history. It came on an inbounds pass from Russell Westbrook after Warriors guard Jamal Crawford banked in a go-ahead runner at the other end with 1.6 seconds left.

Jeff returned to Celtics and scored double-double in his debut game. Spent 26 games with the team, on June 30, 2011, Boston extended a $5.9 million qualifying offer and Jeff became a restricted free agent. In December 2011 Green prepared to sign a one-year, $9 million contract with the Celtics. Unfortunately, during a routine physical before the contract was finalized, a doctor found an issue with his heart – an aortic aneurysm.

Boston voided the deal. In January, Jeff underwent open-heart surgery. During the procedure, Green’s heart was stopped for about an hour. It took five hours for the surgery to be completed. Jeff was forced to miss the rest of the 2011-12 season. That failed deal saved his life. Most people who have aortic aneurysms, like doctors found Green had, only find out when the aorta ruptures, which is typically fatal.

After recovery, Green signed with Celtics a four-year $35.2 million contract. He played for them until January 2015. Then Green appeared in Grizzlies as a result of multi-player deal between Pelicans, Celtics, and Grizzlies. He spent one year in Memphis and moved to Los Angeles.

Clippers became the next short stop for Jeff. After the trade, Jeff’s play took a steep decline, averaging no more than 13 points per game. His defense went from solid to suspect, and his jump shot became inconsistent. Scoring 10.9 points on average, he spent 27 games for the club and signed a one-year $15 million contract with Orlando on July 7, 2016.

Green spent 69 games for Magic in the 2016-17 season. However, he endured back spasms intermittently during the season. He often wore a heating pad on his lower back when he sat on the Magic's bench. On March 20 the team officials were listing him as having a sore lower back. So, Jeff missed the rest of the season.

On July 9, 2017, Orlando renounced their free agent exception rights on Green. Two days later the player joined the Cavaliers. He signed a one-year $2.3 million contract. As a part of the team, Green played in the NBA Finals, where Cleveland lost to the Warriors of Green’s former teammate KD. Soon, Jeff moved to Washington and joined Wizards.

On July 2, 2019, Jeff Green agreed to sign a one-year $2.56 million contract with the Utah Jazz. Utah became the eighth franchise for Green to play for since he joined the association in 2007.

Jeff has a happy family. In 2017 he tied the knot with his long-time girlfriend, Stephanie Hurtado. The pair welcomed their first daughter in February 2017 and their second daughter in May 2018.