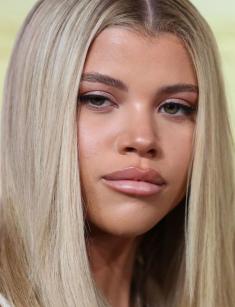 Sofia Richie is a famous model, who was seen in many advertising campaigns that were held by many major brands. Richie is the daughter of a notorious singer Lionel Richie, but she decided to pursue the career as a model.

The model was born in Los Angeles, California, the U.S. Her parents are both creative people. Her father Lionel Richie is a popular songwriter, singer and producer. Her mother Diane Alexander is a former dancer, at present, she works as a fashion designer.

Sofia is the younger sister of Nicole Richie, who was adopted. It's worth noting that Sofia Richie's godfather was Michael Jackson. The model shared her memories with her fans saying that as a child, she liked to visit Jackson's Neverland Ranch. Those trips were some of her favorite moments from childhood. At that time she was happy to spend time with the singer's daughter, Paris.

Richie grew up with a great passion for music like her dad. Sofia started to sing her first songs at age 5. She also learned to play the piano at age 7. She had an opportunity to appear at her father's shows. When she was 14 years old, she took vocal lessons from Beyonce's vocal coach, Tim Carter. She also spent a lot of time in the studio with her brother-in-law Joel Madden. Despite her musical successes and talent, she decided to leave the music career. She explained that she was often compared to her famous father, and it was difficult for her to keep at a certain level.

Richie spent some time at Oaks Christian School. This school is also called "Celebrity High". Sofia got the education at home while her father was on tour. She was interested in sports and played soccer until age 16.

Richie started her career as a model at age 14. She was seen in a feature in Teen Vogue magazine. Being 15 years old, Sofia was offered to sign her first fashion contract. She started to work for Mary Grace Swim, Los Angeles-based swimwear company.

Richie participated in advertising campaigns held by the most popular brands, such as DL1961, Chanel, Dolce & Gabbana, Adidas, and many others.

She was photographed for Elle, a worldwide lifestyle magazine. She also graced the cover of Complex, a New York-based media platform for youth culture.

In May 2017, Sofia Richie started dating television personality Scott Disick. Her boyfriend was 15 years older than her. That is why her father expressed concern over her relationship when he told in one of the interviews that he was against their romance. Unlike her father, Sofia's mom approved her boyfriend.

Scott Disick was happy that his girlfriend Sofia was getting close to Kylie Jenner. It happened after Sofia Richie joined her girls’ squad on a trip to Turks and Caicos to celebrate the launch of the Lip Kit queen’s skincare line. For Scott it was a sign that Sofia has been further accepted in the Kardashians family.

There was also an interesting situation when Scott Disick celebrated his 36th birthday with his both loved ones, Sofia and Kourtney Kardashian. Kourtney is his ex-wife and the mother of his three children. They continue to keep in touch with each other. She was glad to get acquainted with his new girlfriend and expressed her respect. Both women were happy to spend time together.

However, the beautiful couple had a break up in June 2018. They split up after Sofia discovered her boyfriend cheated on her. The duo decided to stay together and spoke out about their reconciliation. In July 2018 Sofia started to star in a reality show Keeping Up With the Kardashians.

Before meeting Scott the model was in relationship with Justin Bieber in 2016.

Richie has an Instagram profile with over 4,8 millions of followers. She shares moments from her everyday life as well as photos from her modeling collaborations.

The net worth of the model is estimated at $3 million.