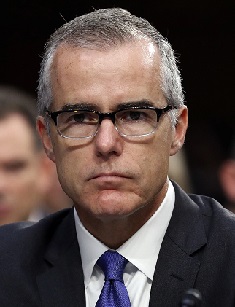 Andrew McCabe is the former Federal Bureau of Investigation (FBI) Deputy Director. He was born on March 18th, 1968 in Jacksonville, Florida. Andrew McCabe's age is 51, weight is 159 lbs (72 kg) and his height is 5 ft 11. His full name is Andrew George McCabe. He has hazel eyes and grey hair. By his ethnicity and nationality he is American. His religion is Christianity and his Zodiac sign is Pisces. In 2016, he became FBI Deputy Director after being an FBI agent since 1996.

Later between May and August of 2017, after James Comey was removed by Donald Trump, then Andrew McCabe was appointed by the US President as an interim Director of FBI. On March 16th, 2018 he was fired from the post of Deputy Director of FBI by Attorney General Jeff Sessions two days before his scheduled retirement, thereby leaving Andrew McCabe’s pension in suspense. According to many sources, he will be able to get his pension but for this he has to wait for a few years.

Andrew McCabe’s early life shows that he was born in 1968 in Jacksonville, Florida but not much is known about Andrew McCabe’s father and mother. He studied at The Bolles School and graduated from here in 1986. Later he got enrolled in Duke University and graduated from here in 1990. It was in this university where he met his future wife – Jill McCabe. In 1993, he also received a J.D. degree from Washington University in St. Louis.

Before joining the FBI he even interned from the criminal division of the US Department of Justice and also spent three years in a private law practice in Philadelphia.

Andrew McCabe rose to prominence after 2016 when he became the Deputy Director of FBI, USA by the then FBI Director, James Comey. However, his FBI career began as the New York Field Office back in 1996 and he was on the SWAT team. In the starting of the new century in 2003, Andrew McCabe became a supervisory special agent at none other than the Eurasian Organized Crime Task Force. Eventually, he entered the FBI Counterterrorism Division, the FBI National Security Branch and even the FBI Washington Field Office to hold management positions.

Things got good for him in 2009 as further he became the first director of the High-Value Detainee Interrogation Group. This was a program which was created only after the ban of waterboarding and other techniques of interrogation by the Department of Defense Directive 2310. The sole aim of the program was to research interrogation techniques. Later on, Andrew McCabe’s career took a new turn when he became a part of the investigation of the 2013 Boston Marathon bombing. Andrew was also able to secure the arrest of Ahmed Abu Khattala. He was suspected of involvement in the 2012 Benghazi attack.

In 2017, he also became an acting Director of the FBI after the removal of James Comey by Donald Trump. Later in the year 2017, he resumed his post of Deputy Director of FBI. However, Andrew McCabe and Donald Trump’s relation was not good and it became evident when the Inspector General of the Department of Justice in addition to the U.S. Senate Judiciary Committee started investigating McCabe.

In 2015, since the wife of Andrew McCabe ran a campaign as a Democrat for the US state of Virginia. Therefore, it was considered that he might have recused himself from the investigation of Hillary Clinton of using a private email server.

In February 2019, after Andrew McCabe was fired he and his wife came out to speak against Donald Trump. Even there is an allegation that the US President called his wife a loser, which he later denied. In the interview in 2019 with 60 Minutes, Andrew McCabe and Donald Trump’s soured relation came out in open. According to the interview, McCabe the days after James Comey was fired, he became concerned about Trump ‘s obstructing justice and he stated that there were chances of the Vice Presidential and Cabinet might have used the 25th Amendment to have Donald Trump suspended from office.

After James Comey, the Director of FBI was fired by Donald Trump then Andrew McCabe also visited the White House. This was supposed to be an introductory meeting in the Oval Office with the US President. According to McCabe, Donald Trump asked him whom he had voted in the 2016 elections.

Andrew McCabe’s bio shows that he was a Republican unlike his wife Jill McCabe who is a democrat and who also ran for the Virginia state senate in 2015. He met her as sophomore in college where Jill had an interest in medicine and Andrew was inclined towards law. Currently, Dr. Jill McCabe is an emergency room pediatrician and has been one of the major reasons behind Andrew McCabe getting fired from the FBI.

According to the article published in The Wall Street Journal showed that how former Virginia Gov. Terry McAuliffe, who was also a close ally of Hillary Clinton, donated money to Jill McCabe during her Senate run. Andrew McCabe’s children include a son and a daughter and they all live in Virginia. The names of Andrew McCabe’s daughter and son are not known.

After Andrew McCabe had been fired, a lot of news emerged on the social networks like Facebook that Andrew McCabe’s net worth was $11 million. However, McCabe’s spokeswoman, Melissa Schwartz, has discarded such claims and no evidence has been found regarding this figure. As per McCabe’s 2017 public financial disclosure report, it can be analyzed that the value of an investment account can be $250,001 to $500,000.

McCabe has several mutual fund accounts, in addition to a 401K retirement fund. The total worth of investment accounts could range from $287,000 to $880,000. Not much is known of Andrew McCabe’s salary but it is expected to be around $131,000 according to Glassdoor. However, an annual salary of a Level III employee in government organization like the FBI is around $172,100.

Andrew McCabe’s father and mother are alive and live with him in his personal residence. As per the Loudoun County, Virginia’s sales and tax records, it has been found that in 2006, McCabe with his wife bought a house costing $715,000 and it was purchased with a mortgage.

Andrew McCabe is not very active on social media, but he has recently come up with a book. In February 2019 Andrew McCabe’s new book – The Threat: How the FBI Protects America in the Age of Terror and Trump, which is an autobiography published by St. Martin's Press was released and since then more and more important information about Andrew McCabe and Donald Trump began to emerge in the public.