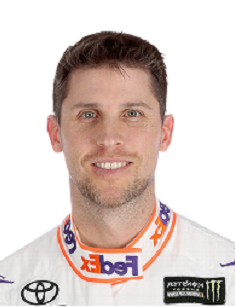 Florida-born, James Denny Hamlin is a successful racing driver, the participant of the NASCAR series since 2004. He got wide recognition as a first rookie who could qualify for NASCAR playoffs. Since then he has won more than 50 races in various Series. Denny will go down in history as one of the all-time greats of NASCAR racing.

He has made his wealth from his racing career. Currently, he resides in the Lake Norman area near Charlotte and spends a lot of time with his two young daughters. Several years ago he opened Denny Hamlin Foundation. He has a net worth of $45 million, including all of his properties and earnings.

The birthplace of Denny is Tampa. However, he was brought up in Chesterfield, the state of Virginia. His parents Dennis and Mary Lou welcomed a baby on November 18, 1980. His father was an entrepreneur while his mother didn’t work.

They were a good family. Little Hamlin was interested in different sports. He spent free time with his friends, practicing basketball, football and golf. From an early age, he was a sports fan. Still, now he continued to support Washington Redskins in NFL and Charlotte Hornets in NBA.

When Denny was seven years old, he jumped into the field of racing. By the age of 15, he managed to win the WKA Cup. He was one of the most promising racers. He showed high intellect, which helped him to win various competitions in sequence during 1998-2004. In 2004 JGR made him an offer, and the sides signed the contract.

Denny appeared in NASCAR Series in 2004, in 2005 he debuted in Cup at Kansas, but spent his first full season only in 2006. He loudly declared himself, become the first rookie who could get into the playoff. At Pocono, Denny could win his first career Cup Series. He dominated at his home track at Richmond. As racing was considered a quite dangerous sport, Denny was involved in various conflicts and aggressive rivalry many times.

In 2014 Denny spoke about Keselowski's on-track aggression, which wasn't well received by his peers, but it was the Team Penske driver's "lack of remorse" that really angered other NASCAR drivers. Brad Keselowski was shoved by Kevin Harvick into a post-race brawl at Texas Motor Speedway as he turned away from a confrontation with four-time series champion Jeff Gordon.

Hamlin said the incident could have been defused if Keselowski had been more contrite when approached by Gordon, who finished 29th because of a flat tire suffered while racing Keselowski for the lead. He said he has learned how to assuage an angry driver's enraged feelings after a race, and it required as much empathy as contrition.

In 2015 Danica Patrick wrecked during one of Daytona 500 practices and was forced to a backup car after apparent contact with Denny, the driver of the No. 10 Stewart-Haas Racing Chevy chalked it up to "the nature of pack racing."

But after a second incident with Hamlin, Patrick wasn’t nearly as forgiving. And she let the JGR driver knew all about it in a heated post-race confrontation on pit road where Patrick got up in Hamlin’s face and accused him of causing her to spin out.

In 2017 Chase Elliott was well on his way to winning his first career race and advancing to the MENCS Playoffs Championship when Hamlin wrecked him in the final laps. While Kyle Busch won the race and clinched his shot at the title, the focus remained on the two drivers involved in the wreck.

One fan was so angry with Hamlin that he confronted Denny after the race. The journalist captured the moment and posted the video to Twitter. The video showed the man being restrained by police after telling the veteran racer to "learn how to drive." Hamlin, who was showered with boos during his post-race interview on NBC, took to Twitter after the race to apologize, not only to Elliott but also to fans.

After the checkered flag flew, Elliott drove into Hamlin's No. 11 Toyota and put him in the wall. Both drivers then got out of the car and shared a heated exchange where Elliott could be seen saying, "You wrecked me," over and over again.

"My mom always said if you don't have anything nice to say, don't say anything at all," Elliott said to NBC Sports.

"He's not worth my time. I got punted from behind and wrecked in Turn 3 leading the race. I don't know what his problem was. It was unnecessary, and I hadn't raced him dirty all day long."

Elliott finished 27th at Phoenix, but surely gained a lot of fans while Hamlin finished seventh.

In 2018 Bubba Wallace and Hamlin battled for second place in the Daytona 500, and Wallace edged Hamlin as their cars bumped up against each other. In a post-race interview, Wallace then made a jab on FOX Sports about Hamlin needing ”to take some Adderall for that one” — a reference to Hamlin’s claim that 70 percent of drivers were using the amphetamine, which he later said was a joke.

The two were recorded arguing outside the Daytona International Speedway media center between their post-race press conferences, and Wallace told earlier that he texted Hamlin, but

In November 2018 Jimmie Johnson and Denny Hamlin completed career firsts at Homestead-Miami Speedway. And they made it not in a good way. With Joey Logano winning the race to take the championship, Hamlin and Johnson concluded winless seasons for the first time in their careers.

In 2019 Denny Hamlin suffered from nausea and double vision from carbon monoxide that seeped into his Toyota at the end of the NASCAR race at Dover. Hamlin felt ill after the race and was attended to by medical staff on pit road after he finished 21st. Hamlin was treated and released from the NASCAR medical care center. Debris struck Hamlin’s No. 11 Toyota during the race that knocked out the right rear crush panel and allowed fumes into the car.

The same year Hamlin won the Daytona 500 second time. His last win was the 2019 MENSC season at Texas Motor Speedway. He had a win at Bristol under his belt and was listed at 14-1 to win in the latest 2019 Food City 500 odds.

Currently, Denny is in a well-matched relationship with Jordan Fish. Although they have been together since 2007, Denny is still not married to Jordan.

They met in January 2007 at a Bobcats basketball match where she was a member of cheerleading group. Although the two were attracted to each other from the beginning, they started dating only after Fish offered a dinner in a gesture to thank Denny for sponsoring her in Miss North California USA Pageant.

Jordan Fish gave birth to their first child, daughter Taylor, in January 2013. Four years later, the pair welcomed their second daughter, Molly. Jordan announced the birth of their second baby via Instagram, posting an adorable picture of the newborn with her elder sibling.

Apart from being a full-time mother, Jordan also runs a company called Kustom Klutch. The company designs and manufactures handmade bags. She sells them in various stores in and around Charlotte. The rumors regularly call Jordan the future wife of Denny. Meanwhile the pair is satisfied with their relationship’s status.

The Denny’s chosen profession is risky, to say the very least. But the interesting case happened when he won the MENCS Overton's 301. His courage seemed to give out a little: At the award ceremony, Hamlin’s crew chief Michael Wheeler presented him with a 22-pound live lobster named Loudon, after the city in which the race took place.

Upon seeing the beast, Hamlin made a run for it, literally pushing aside onlookers to get away from the lobster. Eventually, Hamlin gathered his courage long enough to take a few photos with his prize, though he looked very wary of Loudon. Later he explained to reporters that he was afraid of lobster.

“Yeah, I’ve never really liked them to begin with. I don’t like the taste of lobsters. I don’t — I just don’t like looking at them. They have pincers, really, so I don’t like anything that’s ugly and has pincers. I don’t know — it’s just a big scorpion in my mind. I try to stay away from them and, yeah, I’ve had some interesting moments with them for sure that I don’t care to recall or bring back up.”

Denny opened a Foundation, which was committed to raising awareness and funds for the specific needs of children with cystic fibrosis. It partners with organizations that focus on cystic fibrosis research, treatment advances, and overall quality of life care. Also, the Foundation is going to support children with other chronic diseases.

To carry out its mission, the Foundation conducts fundraising events, accepts contributions, grants, and gifts of money and property; and will invest the same and distribute to other exempt organizations.

If you are a big Denny’s fan, the official shop.cbssports.com offers you an authentic Hamlin Tank Top. There you can find them in all the sizes, colors, and styles.