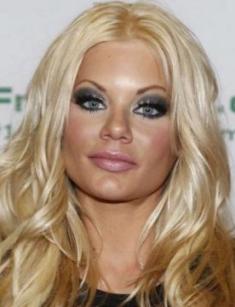 Every role in Riley Steele’s filmography is leading: she participates in adult movies. She has earned popularity not only in this genre but also in feature movies. However, fans believe that her best scene still pertains to the 18+ category.

Brittni Anne Palmer was born on August 26, 1987, in San Diego, California. Later, her parents moved to Escondido; this is where the girl spent her childhood.

Steele started her career as a photo model, but she realized soon it was not what she wanted. As the actress confessed in her later interviews, the pornographic actress Jesse Jane was her icon at that period.

She wanted to be similar to Jesse and be called the international sex symbol. Surprising as it may seem, Riley met Jesse Jane in Hollywood, at an adult movie presentation. The pornographic star gave Steele her contacts and asked her to give her a call and try herself in the genre. The dream seemed to have come true, but it took Riley Steele three years to pull herself together and dare to call.

In 2008, Steele went to the director and the owner of Digital Playground to audition. She was offered a favorable contract, and Riley, who had been working as a waitress, gladly accepted the invitation. Naked Aces 5 was the actress’s debut. The director and ordinary viewers liked the woman’s appearance and acting, and she had as many roles as she wanted.

Pirates II: Stagnetti’s Revenge was the next 18+ project. It marked the beginning of career improvement; Steele took part in dozens of videos and became one of the much-talked-about pornographic actresses, just like legendary Sasha Grey.

Riley’s family could not help noticing this popularity. As she told journalists, the father got pretty upset when he learned what his daughter was doing and tried to convince her to quit. However, he met directors and crews and took it more relaxed; the relationship with Riley came back to normal.

Riley Steele’s work was appreciated: she received the F.A.M.E Award for the best debut. The next year, she was nominated for AVN Award in Best New Starlet, and Riley Steele: Chic became the most popular movie of the year.

In 2012, fans were shocked to learn the news that the actress was going to leave the pornographic industry. However, Steele said later it was a joke, and she did not plan to quit; new adult movies followed.

Despite her openness in front of a camera, Riley keeps secret the details of her private life; only rumors appeared here and there, with no official confirmation.

In 2015, Riley found the person she loved and married him; it was the actor Andrea Diprè. The couple has no children.

Just like in her childhood, Riley Steele is fond of figure skating. She also likes to travel, listen to rock music, walk, and sunbathe. The actress is not capricious when it comes to food, but she loves coffee and ice cream. As the woman emphasized in one of her interviews, she is an ordinary person in her daily life: Riley goes out without makeup, watches series, and treats herself in a nearby café.

Today, the actress continues to participate in pornographic pictures. 2018 brought several projects, such as My Dirty Point of View and The Female of the Species.

One can learn the latest news about the woman’s career and plans on the official website, as well as fan groups in social networks.