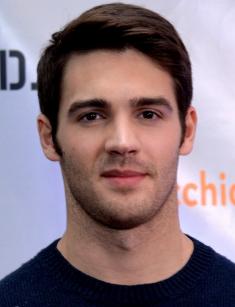 The future of hereditary actor Steven R. McQueen was already meant in childhood. How not to connect life with a creative profession, if parents and grandparents are Hollywood stars. So far, the young man is only on the way to Olympus, but it is possible that his name, like the names of his relatives, will soon announce the world loudly.

Steven Chadwick McQueen was born in Los Angeles, California, to Stacey Toten (now Stacia Robitaille) and actor and producer Chad McQueen. His father is an American actor, who is best known for his roles in the film The Karate Kid (1984) and Papertrail (1998), and his mother played supporting roles in movie Star 80 (1983) and Back to School (1986).

Relations between actor's parents did not go well, so they divorced when the boy was five years old. Steven stayed with his mother. After some time, she married a retired NHL hall of fame Luc Robitaille and gave birth to Steven' younger brother Jesse Robitaille (born 1995). McQueen also has a younger brother Chase McQueen (born 1995) and sister Madison McQueen (born 1997) from his father's second marriage. McQueen's stage name is "Steven R. McQueen," the "R" referring to his stepfather's surname Robitaille.

The acting talent of the McQueen family originates from grandfather - Terrence Stephen “Steve” McQueen. In 1974, he became the highest-paid movie star in the world, although he did not act in films again for four years. McQueen was combative with directors and producers, but his popularity placed him in high demand and enabled him to command large salaries. He married Filipino-American actress, singer, and dancer Neile Adams, with whom he had Steven R. McQueen’s father, Chad McQueen.

There is no information about McQueen’s education; perhaps, with his natural talent, it might not be necessary. At the age of 17, a young man made his television debut and, since that time, he had not yet regretted of his chosen profession. In an interview with Hollywood Crush, he once said:

“As soon as I started acting, I realized that I was in love with my profession. Acting is my passion.”

Steven R. McQueen's first acting experience was appearing in an episode of the short-lived CBS science fiction drama Threshold (2005). He played a supporting role of Jordan Peters in the episode: Blood of the Children.

One of his most notable roles to date was a recurring role for seven episodes of the fourth and final season of The WB drama Everwood from 2005 to 2006. He joined the cast of series on the seventh episode of the fourth season as Kyle Hunter, a high-school freshman, whom Ephram, widow's son, began giving piano lessons, although talented, Kyle is sullen and difficult.

After shootings in Everwood, there was a short break in Steven’s career. He guest-starred on many television series including Numb3rs (in episode: Atomic No. 33), Without a Trace (in episode: True/False), CSI: Miami (in episode: Gone Baby Gone), and many others.

In January 2008, McQueen made his film debut in the Disney Channel Original Movie Minutemen where he played the villainous role of Derek Beauguard. It is a comedy/sci-fi/adventure about three high school kids, who invent the 10-minute time machine to spare others just like them from the humiliation they've endured.

In 2009, Steven McQueen was cast as Jeremy Gilbert in the CW's television adaptation of L. J. Smith's The Vampire Diaries novels and starred for the first six seasons until 2015. The story centers on Elena Gilbert (Nina Dobrev), a young high school girl who finds her heart eventually torn between two vampire brothers, Stefan (Paul Wesley) and Damon Salvatore (Ian Joseph Somerhalder). The girl is an exact copy of the brother's past love Katherine Pierce. McQueen as Jeremy Gilbert, Elena's younger brother, joined the main cast from the first season.

Character’s biography is more than dramatic. Jeremy was worried about losing his parents, took drugs and slowly dragged himself to the bottom until he met true love. After the girl died, he tried to turn into a vampire, but he could not. Jeremy died several times, but was supernaturally came back from the dead.

In season six of The Vampire Diaries, Jeremy Gilbert left Mystic Falls, so Steven McQueen left the series too. After several years, in 2017, the young man returned in the eighth season shooting in 100 episodes.

The Vampire Diaries ended, but not for McQueen. In 2018, an American television drama series Legacies was released created by Julie Plec. It is a spin-off of The Originals and features characters from both that series and its predecessor, The Vampire Diaries. This series is about the Salvatore School, which provides a haven where supernatural beings can learn to control their abilities and impulses. That is why Steven McQueen continued the role of Jeremy Gilbert, whom he originated in The Vampire Diaries.

McQueen appeared as yet only in one episode We're Being Punked, Pedro, but it is possible that if the project renewed for the second season, fans of the vampire saga would see Jeremy Gilbert more than once.

Due to the shootings in The Vampire Diaries, Steven R. McQueen had not only popularity but also some of the affairs. Candice Accola, who played Elena Gilbert's best friend Caroline Forbes, became the first in McQueen’s love adventures. The relationships of the characters were transferred to the personal life of the actors: in 2010, Candace and Stephen were spotted in a spicy situation with many candid photos appearing on the Internet.

The actors did not give official statements about their mutual attraction; apparently, they were for open relationships. At the same time, Steven was dating his Minutemen colleague, Chelsea Kane, while Candace had an affair with Tyler Shields.

The actor was dating Hillary Harley, a supporting actress in The Vampire Diaries, for some time, until McQueen met a model, Olivia Pickren. In January 2013, rumors said that McQueen was in close contact with the daughter of Sean Penn - Dylan Penn.

After a long break, at the end of 2016, Steven McQueen and his beloved Allie Silva, the Brazilian model, officially announced about their relationships. At the beginning of 2018, the actor and the model both took to their Instagram pages to post the engagement news, sharing a black and white photo of the two kissing and holding hands over a romantic dinner.

“She said yes,” - McQueen wrote at the time.

Silva was preparing to become a wife, have children, but in May of the same year, Steven confirmed the rumors about the cancellation of the wedding.

"We canceled the wedding, and we really did it. And now I am enjoying my time. If I am stressed I like anything from hiking with my dogs to boxing,” – McQueen said at the Voices In Displacement ceremony.

In 2019, the shootings of two projects with the acting of Steven R. McQueen are continuing – TV series Legacies and Medal of Honor.

Medal of Honor is a hybrid docu/live-action anthology series that portrays stories of personal sacrifice that resulted in the highest military distinction: the Medal of Honor.

Steven R. McQueen takes salary $15,000 per episodes and has the Net worth of $3 million.