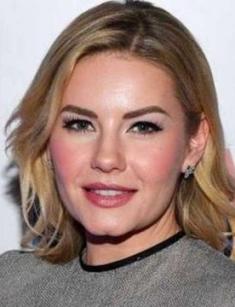 Elisha Ann Cuthbert is a Canadian model, TV presenter, and actress known for the sitcom Happy Endings. She often stars in comedies and horrors.

The would-be celebrity was born on November 30, 1982, in Calgary, Canada. The girl’s father worked as a car design engineer; the mother kept the house. Elisha grew up with a brother and a sister in Greenfield Park, not far from Montreal.

When the young woman turned 17, she moved to Los Angeles, determined to build an acting career.

Elisha showed the interest in drama early; she worked as a model for children’s clothes brands at nine. At the age of 15, Elisha became a co-host of the popular Canadian show Popular Mechanics for Kids. This is where Hillary Clinton, the American President’s wife, noticed the actress; she sent Elisha an invitation to visit the White House.

The American-Canadian horror series Are You Afraid of the Dark? was one of the first projects for Cuthbert. She personified Megan, a girl from a wealthy family. As the story runs, a group of teenagers who call themselves “The Midnight Society” gather together once a week in a forest and tell each other scary stories.

Each episode was a separate story told by The Society member. Elisha’s character does not like to hold meetings in the forest, and she offers to use her backyard.

2003 was marked with the tragicomedy Love Actually; she played American Goddess Carol in the last part, Colin, Tony, and the American Girls. The main character, Colin, is not popular among British girls; he decides to leave for the United States and spend two months there to allure a couple of American girls. Carol among the people Colin meets in a bar.

The next year, the actress joined the cast of the youth comedy The Girl Next Door and got the role of Danielle. The main character feels attracted to the beauty and peeps at her while she is changing her clothes. As Danielle notices that, she decides to crack a joke. The young people get closer and start dating. Soon, the new details are revealed: sexy Danielle appears in adult movies. The relationship deteriorates.

2005 brought the lead part in the horror House of Wax. Her character, Carly Jones, goes to a soccer match with five friends; the company stays for a night in a forest and encounters a stranger on a truck. Carly finds a hole full of animal dead bodies. Soon, somebody breaks the young people’s car, and Jones and her boyfriend have to go to the nearest town to buy some repair parts. They find a weird house with wax figures; all the exhibits look quite realistic. They do not know they are going to face a maniac soon.

The next year, the artist worked on the thriller The Quiet. She personified Nina who lived with her parents and supposedly deaf and mute cousin. Nina is popular at school, but her life is not as cloudless as it seems: her mother is a drug abuser, and the father sexually harasses the young woman. Nina dreams of escaping from her house. Eventually, the main character and her cousin find themselves the only hostesses of the house.

In 2007, Elisha gained the role of Jennifer Tree in the horror Captivity. Jennifer is a photo model who drinks too much in a club and wakes up in a basement of an unknown house.

Somebody kidnapped the model and watches her via cameras; they bully and torment her. At some moment, another person appears and tries to help the woman; however, it is no friend.

The tragicomedy The Six Wives of Henry Lefay brought the role of Barbara, a businessman’s daughter. She lives separately and comes back home as soon as she learns the sad news: her father died when he made a parachute jump in Mexico. Barbara finds her father’s ex-wives, each of which has her own opinion about what should be done with the man’s body and how.

In 2011-2013, the artist starred in the series Happy Endings. Her character, Alex Kerkovich, leaves her fiancé right before the ceremony. Not only the couple but also their friends are perplexed; they have to decide what to do next.

The Canadian comedy Goon: Last of the Enforcers was one of Elisha’s recent projects. She got the role of Mary, the main character’s sister.

Cuthbert is married to the Canadian hockey player Dion Phaneuf. The couple met in 2008 and married in July 2013. Her daughter Zaphire was born in December 2017.

Elisha loves hockey. In 2005, she got a personal blog on the National Hockey League website. Los Angeles Kings is the actress’s favorite team: she regularly buys tickets to their matches. She even used to date the club’s former player, Sean Avery.

Maxim often includes Elisha Cuthbert in the lists of the sexiest women. In 2006, the woman said in her interview she would never appear naked in front of a camera; she would use doubles if necessary.

Today, Elisha Cuthbert continues to work on the series The Ranch and play Abby.

It is a story about a son of Colorado farmers; the young man leaves his soccer career and comes back home to do the family business.