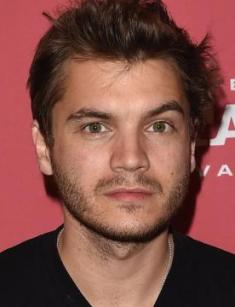 Popular American actor Emile Hirsch is known not only for his roles in films and TV shows. He has become famous as a lady's man who has had a large number of love affairs with actresses. His name also appeared in the press when the man was involved in the scandal related to the attack on Daniele Bernfeld, an executive for the Paramount Pictures. The actor was even sentenced to prison.

The future actor was born in California in the early spring of 1985. His mother is of German and English descent, and his father is Jewish. Therefore, Hirsch is of mixed ancestry. He prefers not to tell this information in online interviews.

Emile's father worked most of his life as an industrial consultant. On the contrary, his mother had a creative job; at that time, she was an artist and created the design of fold-out books. Probably, the son inherited the love for creativity from his mother, although he developed another kind of art.

From childhood, the active boy loved to be in the spotlight. He spent his early childhood in Los Angeles, California, and after his parents divorced, he and his mother moved to Santa Fe, New Mexico. The mother noticed the inclinations of her son, and therefore, when the boy turned eight years old, the woman first took him to an audition. So, the filmography of the young actor began to include bit parts.

Hirsch’s first projects were the TV series Sabrina, the Teenage Witch, NYPD Blue, and Kindred: The Embraced. Emile made his feature film debut in 2002. The young man appeared in the movie The Dangerous Lives of Altar Boys, in which he and Kieran Culkin played two friends who studied in a Catholic school. Immediately after that, he starred in the film The Emperor's Club, and a year later he was invited to play in the crime melodrama The Mudge Boy directed by Michael Burke.

In 2004, the teen comedy The Girl Next Door was released. Emile Hirsch played the leading role. He starred with Elisha Cuthbert, Timothy Olyphant, and James Remar. The film tells about high school students, one of whom dreams of becoming a politician.

One day, the young man sees a new neighbor, an irresistible blonde. The student falls in love and thinks that he has met the woman of his dreams. But the young man is surprised and disappointed when the entire town has learned that his girlfriend is a former adult film actress.

Hirsch appeared in another important project in 2005. It was Nick Cassavetes's Alpha Dog, in which the young man landed the leading role of drug dealer Johnny Truelove.

In 2007, Emile Hirsch appeared in Sean Penn’s adventure drama Into the Wild. The film shows the story of a young man who had just graduated from university. He begins hitchhiking to Alaska, having spent his savings and sold the property. Emile co-starred with Kristen Stewart in the project.

The next movie, which made Emile even more famous, was released in 2012. The melodrama Twice Born directed by Sergio Castellitto brought success to the actor. So, directors began to invite Hirsch more often. In 2016, Emile landed the leading role again, this time it was the horror film The Autopsy of Jane Doe. Brian Cox, Ophelia Lovibond, and Michael McElhatton also appeared in the movie.

Later, the actor played in the war drama film The Chinese Widow (2017), the crime thriller The Outsider (2017), the fantasy drama Freaks (2018) and voiced the character in the fantasy animated series 3Below: Tales of Arcadia.

There are a lot of rumors in the press about the actor’s personal life, and some of these rumors are true. Hirsch began dating the first known girlfriend after filming in The Girl Next Door. The young man had a long-term relationship with actress Elisha Cuthbert. However, after several years of dating, the young people broke up. They did not have children.

In 2006, Hirsch started a love affair with model and actress Amanda Seyfried. Although they had been together for two years, the beautiful lady was probably not ready for marriage. Perhaps there was another reason for their separation. However, his girlfriend did not grieve for a long time and almost immediately began dating a new boyfriend.

Emile also quickly found a new love, treading in the steps of the ex-girlfriend. He started a relationship with Ellen Page. At that time, there were rumors about Page’s sexual orientation, and when she broke up with the actor, information appeared in the press that she had married a woman.

The list of Hirsch's love affairs has continued to expand. The young man managed to build a relationship and then broke up with actress Brianna Domont, Danish model Lucila Valdivia, etc. Apparently, Emile was tired of such short term relationship and decided to build a strong family. Moreover, there was little information about his beloved woman.

It was rumored that she was one of the actresses with whom the man had previously had an affair. In 2013, the woman gave birth to a son. However, she did not become his wife. Although their relationship did not last long, the actor has not abandoned his son. He has supported the ex-girlfriend and child after separation.

Nowadays, the celebrity continues to lead a bachelor’s life. At least, there is no information about his new girlfriend on the Internet. The actor has an Instagram page, where the man regularly posts new photos. Hirsch’s fans have noticed his athletic build. There is contradictory information about it on the Internet. He is 5.57 ft. (170 cm) tall, weighing 149.91 lbs. (68 kg).

Hirsch continues to work in the film industry, and his filmography includes new projects every year. On March 15, 2019, the action movie Never Grow Old directed by Ivan Kavanagh was released, starring John Cusack, Antonia Campbell-Hughes, and Emile Hirsch. The film tells about a gang of murderers and thieves who have settled in a small pious town and begin to inculcate fear and wreak the havoc there.

One more film, which will be released at the end of July 2019, is Quentin Tarantino’s American thriller Once Upon a Time in Hollywood. The movie has also starred Leonardo DiCaprio, Brad Pitt, and Margot Robbie. It tells about the actor who was trying to make it into the film industry after the success of the television series. But his stuntman wanted the same thing. Emile got the role of Jay Sebring.

Emile Hirsch has a net worth of $15 million.