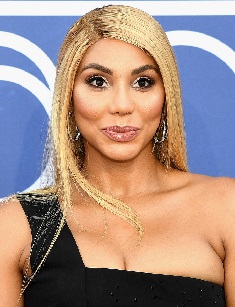 Tamar Estine Herbert (née Braxton) is a famous American singer, songwriter, media personality and reality television personality. Speaking about her music career, the woman is mostly known for such top songs as «Pick Me Up,» «If I Don'T Have You,» «Daddy Song (If You Call Me Daddy),» and «All The Way Home.» Let’s know more of her biography!

Tamar's birthplace is Severn, Maryland - she was born there on March 7, 1977, to the family of Michael and Evelyn Braxton. She was the youngest kid and had 5 siblings. She became interested in singing as a child. As a teenager, Tamar, alongside her sisters, became members of a church choir, where their father Michael Braxton was a pastor.

Girls Toni, Traci, Towanda, Trina, and Tamar Braxton, managed to sign a contract with Arista Records in 1989. Two years later they released a debut single «Good Life» which was not really of high success. It peaked at. No 79 on the Billboard Hot R&B/Hip-Hop Singles chart. While working there, the members' age differences created a problem with marketing. As a result, the sisters had to leave the label.

In 1991 Toni Braxton was noted by professionals L.A. Reid and Kenneth «Babyface» Edmonds. They signed a deal – Toni was hired as the label's first female solo artist. Traci, Towanda, Trina, and Tamar appeared in the music video for Toni Braxton's third single, «Seven Whole Days,» which was included in her self-titled debut album.

In 1993 LaFace Records A&R Vice President, Bryant Reid signed The Braxtons to LaFace. However, the band has never released albums or singles on the label. The girls succeeded to sign with Atlantic Records. Two years later, Traci decided to quit working there for the sake of a youth counselor career. Later it was revealed that Traci was not allowed to sign with Atlantic because she was pregnant at the time.

In 1996, Tamar, Trina, and Towanda pleased their fans by a new album «So Many Ways» – it got to the 26th place on the Billboard R&B/Hip-Hop Albums chart. In 1998 Tamar left the band in order to become a solo singer with DreamWorks Records. Other group's members also parted ways.

Later Tamar got acquainted with Christopher «Tricky» Stewart. Her first studio album was called «Ridiculous» – because she used many different musical styles. The collection included two buzz songs («Let Him Go» and «Just Cuz») aimed to grab attention from the public eye. Unfortunately, the tracks failed, and the album was canceled. The same year, Braxton appeared on Sole's, «4 The Love of You.» The song included uncredited background vocals and songwriting by -winning R&B singer Mýa.

In 2004 Tamar signed a deal with Tommy Mottola. She began working on her second studio album. The label tried to change Tamar's version of her album, and she decided to leave it.

In 2010 Tamar signed a contract with Universal Records. Together they released a track «The Heart in Me.» It was included in the album «Adidas 2: The Music.» In January 2010, WE tv signed Braxton and her family for a reality series, Braxton Family Values. It was shown on screens for the first time on April 12, 2011. Braxton and her husband played the main roles. The plot was about their personal life and career.

Tamar was invited to work as a model for the "Front Row Couture" collection during the "ELLE/Style360" NYC Fashion Week event.

In spring 2013 Braxton signed a deal with Epic Records and released on it her second album called «Love and War». Its leading track was released on December 6, 2012. It happened to be of high commercial success, spent nine weeks at #1 on the Adult R&B Songs chart.

That year, Tamar pleased her fans by publishing her first Christmas album, «Winter Loversland.» The collection reached number 43 on the Billboard 200 with 8,000 copies sold in its first week. In December 2013, Braxton received three nominations for the 56th Annual Grammy Awards; Best Urban Contemporary Album for «Love and War», and Best R&B SongBest R&B Performance for its title track.

In 2014 Tamar took part in the recording of the remix of Robin Thicke's single «For the Rest of My Life.» Her show's third season was shown on screens in October 2014. It consisted of 10 episodes. On October 6, Tamar's song «Let Me Know» (recorded feat. Future) got to the 2nd place on the Trending 140 chart. Billboard.com gave the song 4 out of 5 stars in its review of «The Best and Worst Singles of the Week» for the second week of October. At the same time, Braxton, and sisters Toni and Trina guest starred on their sister Traci's music video «Last Call.»

That year Tamar took part in the show Dancing with the Stars. There she got paired with Louis Van Amstel. In November, Tamar Braxton was rushed to the hospital with pneumonia. Braxton was a fierce competitor on Dancing With the Stars, even though she was battling health issues throughout her time on the show. Her schedule was just too hectic, and she ended up developing pneumonia, which then led to blood clots in her lungs. In turn, she was forced to quit the show.

On April 27, 2017, Braxton released «My Man» included in her last album «Bluebird of Happiness.» The song peaked at number three on the US Adult R&B Songs. On July 25, 2017, she made a cameo appearance on the television series In the Cut. On March 23, 2018, Tamar and sister Towanda guest starred on their sister Toni's music video «Long as I Live.» In 2018 Tamar appears on Hip Hop Squares.

In 2019 Braxton was invited to the second season of the American reality television Celebrity Big Brother. It was shown on screens on January 21 and concluded on February 13. Remarkably, Tamar is the second show's competitor to win unanimously with a vote 9-0. Besides, she is the first African American to ever win a season of Big Brother in the United States.

In Big Brother tradition, Tamar will appear on the American television soap opera The Bold and the Beautiful.

Braxton’s net worth is evaluated at $6 million.

In 2001, Braxton married her first husband - music producer Darrell Allamby. They met in 2000 while Allamby worked on Braxton's debut album «Money Can't Buy Me Love.» They ended up divorcing in 2003.

After breaking up with Allamby, Braxton began dating Vincent Herbert. In 2008, Tamar Braxton married him. They were introduced to each other by Tamar's sister Toni and had been dating since 2003, before tying the knot. Braxton and Herbert lived in their own home in Calabasas. The house was built and sold by StockCross owner John Gebbia and measures approximately 15,000 square feet. The Braxton-Herberts paid $10.5M for the property in April 2013.

The couple made their television debut together on Braxton Family Values and later scored their own spin-off show. On Tamar & Vince, their fans have watched the couple at odds and headed for divorce, but Braxton later stated on live television that she and her man had no problems. However, the gossips appeared that Herbert had a girlfriend. There were also rumors that Braxton and her husband were faking their marital issues for television. Eventually, they divorced.

The spouses have a 5-year-old son Logan Vincent Herbert together. Although Logan has appeared in a few of his mother's Instagram photos, she doesn't often post about him on social media – prefers to keep him clear of the spotlight.

In September, Tamar appeared on The Wendy Williams Show. She was asked by Williams about some family drama and said she had been molested in her childhood.

In 2018 Braxton shaved off all of her hair last year and explained in an Instagram post it represents a kind of "personal freedom."

Recently the world could know about Tamar's affair with David Adefeso.

Tamar talked about her relationship with David during a 2018 appearance on The Wendy Williams Show and was also invited to the interview with Steve Harvey. According to her, they got acquainted at a friend's birthday party.

She has made it clear for quite some time now that she’s head-over-heels in love with new boyfriend, David Adefeso. But she is feeling somewhat sad and guilty that she is so happy and with the man of her dreams while actress Lauren London is currently grieving the loss of her longtime partner and «the love of my life,» Nipsey Hussle. Recently, in her Instagram profile Braxton published a post where said she felt sorry about London’s situation and tried to support her. However, fans took the post ambiguously. Some have even said the celebrity just wanted to boast.

There are rumors that Braxton has had a relationship with Mr. Rikk from 2002 to 2018. It means, she was an infidel while being married. However, there is no proof.

At the end of 2018 an unpleasant situation happened. So, Braxton published a photo while standing next to her tree wearing a bright color-block sweater with leggings. The haters immediately took up discussing her outlook in the comments. They noted botox in her cheeks and other steps of surgery. Others even compared her appearance with Magic Johnson’s son EJ Johnson.

The singer has faced comparisons to Magic Johnson’s famous son before but it doesn’t seem as if the holiday season has caused trolls to ease up on making them. Some insisted the remark was not meant as a dig, but some fans felt the comments were clearly meant to be shady.

In March 2019 Braxton became a reason for an Instagram scandal. So, The Pace sisters’ member Duranice Pace taped a stirring rendition of «Amazing Grace» for Steve Harvey’s show and shared it on Instagram. Tamar commented that her "wig was stressing her out."

LaShun Pace replied immediately in the comment section, making sure to slam the "Braxton Family Values" star with a scriptural shade.

«I love my oldest sister! With everything she has gone through in life she is yet singing through it all,» LaShun said.

«Touch not mine anointed @tamarbraxton.» Other Duranice’s sisters and her fans supported her and criticized Braxton.