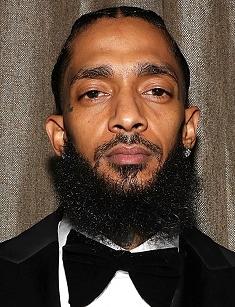 Nipsey Hussle (original name is Ermias Joseph Asghedom) was an American rapper, entrepreneur, and community activist whose fame had spread around the world. He started his rap career in the 2000s when he began releasing numerous top mixtapes. Speaking about a business he dedicated himself to, Nipsey was the owner of the Marathon Clothing, and he co-founded Vector 90. Before fame, Hussle’s life was linked with crimes and gangs. Hussle was shot on March 31, 2019 – he died as a 29-year-old outstanding star. It is high time we knew some more information about him!

Nipsey Hussle’s birthplace is Los Angeles, California, U.S. – he was born there on August 15, 1985 to the family of Angelique Smith, and Dawit Asghedom, an Eritrean immigrant. He spent his childhood in the Crenshaw neighborhood of South Los Angeles. Ermias had brother Samiel and sister Samantha. As a kid, he studied at Hamilton High School in the nearby Castle Heights neighborhood. However, he didn’t graduate from it but dropped out. When Nipsey was a 14-year-old teenager, he left home and joined the local Rollin 60's Neighborhood Crips, a sub-group of the larger Cripsgang primarily based in his home neighborhood of Crenshaw. His nickname’s meaning is simple – it was initially a play on the name of comedian Nipsey Russell. Nipsey got this name due to his old friend.

As a 19-year-old man, Asghedom, his brother and father embarked on a trip to Eritrea, East Africa for three months in 2004. In his future admissions, Hussle said the traveling inspired him to become a community activist with an «entrepreneurial spirit.»

December of 2005 was marked by releasing of Nipsey Hussle’s first mixtape entitled «Slauson Boy Volume 1.» Due to the project, he got his own audience, fans. It led Hussle to the contract with Cinematic Music Group and Epic Records. Later the musician improved his sounding, developed his abilities. So, in 2008 he pleased his fans by the first two installments in his «Bullets Ain't Got No Name» series of mixtapes. The mixtapes helped him spread for a broader audience.

In 2009 Hussle succeeded to collaborate with Drake (they worked on the song «Killer»), with Snoop Dogg and Problem on the track «Upside Down» included in Snoop Dogg’s album «Malice n Wonderland.» The same year, the musician added to the list of his project the third installment in «Bullets Ain’t Got No Name» and the debut song «Hussle in the House.» It was of high critical success but failed to reach charts.

In 2010 Epic was getting through financial problems which made Nipsey leave the label. Shortly after Hussle took part in the recording of the song «We Are The World 25 for Haiti.» He announced he would publish his first album «South Central State of Mind» at the end of 2010. Meanwhile, he released the single «Feelin' Myself» recorded with Lloyd. That time Hussle worked alongside J.R. Rotem, Scott Storch, Mr. Lee, Play-N-Skillz, Terrace Martin and many others. Besides, the rapper said he was intended to record the mixtape «Red and Blue Make Green» with Jay Rock.

Having left Epic, Hussle decided to create his own label named «All Money In.» On December 21, his first mixtape on the label was released – it was named «The Marathon.» Kokane and MGMT took part in its recording. One year later, on November 1, 2011, its sequel «The Marathon Continues» was released. Nipsey invited L.A. rappers YG and Dom Kennedy to appear there. In April Hussle and fellow rapper Blanco together released the album «Raw.» In the collection, we can hear YG, Mistah FAB, Yukmouth, B-Legit, Kokane, and Freeway.

May 2012 was marked by Nipsey’s new track «Proud of that» recorded alongside Florida rapper Rick Ross. Also, that time Hussle took part in the recording of Ross' Maybach Music Group's song «Fountain of Youth,» which appears on the label's second album «Self Made Vol. 2.» Its music video was released in October 2012. The gossip appeared that Hussle was going to be signed to MMG. In December the musician himself admitted the rumor.

Hussle was invited to perform at the Paid Dues festival on March 30, 2013, in California.

2013, in general, was successful for the rapper. So, he released several songs included in his then-upcoming mixtape «Crenshaw.» He published the song «Face the World» (produced by 9th Wonder). The Futuristics, and 1500 or Nothin' produced track «Blessings.» Earlier Hussle had started working on his new music project entitled «Victory Lap». Initially, Nipsey planned it would be a mixtape. Later he changed his mind and decided «Victory Lap» would be released as an album. On October 8, 2013, Hussle’s mixtape «Crenshaw» was published. It happened to be of high commercial success. In 2014 Nipsey released the tracks «Between Us» (feat. K. Camp), «Diamonds.»

In 2015 and 2016 the rapper collaborated with such artists as Jadakiss, Trae Tha Truth, and YG. In 2016 the world could hear to Nipsey’s new mixtape called «Famous Lies and Unpopular Truth.» The same year, Hussle released a song expressing his opinion about the 2016 US presidential election. So, the track was named «FDT» («Fuck Donald Trump») with YG; it was written about Hussle's positive experiences with Mexican immigrants in the United States, whom Trump had criticized.

On February 16, 2018, Hussle’s album «Victory Lap» was finally released. It got to the 4th place on the Billboard 200. In the first week, Hussle managed to sell 53 000 copies. The collection brought its author commercial and critical success – its songs got to the Billboard Hot 100, including «Double Up,» «Last Time I Checc'd» and «Dedication.»

In June 2017, Nipsey launched the shop «Marathon Clothing» alongside his partners Carless, Civil and his brother Samiel Asghedom. The shop was situated at this intersection along the Crenshaw commercial district. But not for nothing Hussle chose the place – he wanted to invest in his neighborhood, to develop it. The shop erased the gap between culture and technology - it gave customers access to exclusive music and other content created by rappers through an app created by software engineer Iddris Sandu.

Remarkably, while many people had been hesitant to invest in crypto-currency given its volatile nature, Nipsey had been heavily involved in the crypto community and had even worked with the brand Follow Coin.

Besides music, Hussle tried out acting. So, in 2007 was invited to star in Bone Thugs-n-Harmony's semi-autobiographical film «I Tried.» Its director was Rich Newey. Three years later fans could see Nipsey Hussle acting in the movie «Caged Animal,» alongside Ving Rhames, Gillie Da Kid, and Robert Patrick. In 2015 Hussle succeeded to star in a cameo «The Sexy Getting Ready Song» in the pilot episode of «Crazy Ex-Girlfriend.»

Nipsey Hussle was in a long-term relationship with model and actress Lauren London before his untimely death on March 31, 2019; the two shared a son together, Kross Asghedom. In spite of the rumors and speculations that Nipsey Hussle and Lauren London had been secretly married, Hussle’s death certificate states under «Marital Status» that he was «Never Married.» The release of Hussle’s death certificate confirms that he and Lauren London were not legally married; however, their love for one another and their blended family was undeniable.

Before being in a relationship with London, Nipsey dated Tanisha Asghedom, and they had a daughter together named Emani Asghedom. London also has a 9-year-old son from a previous relationship with rapper Lil Wayne named Cameron.

Hussle has long been associated with the Rollin 60s Neighborhood Crips, one of Los Angeles’ largest street gangs.

Nipsey Hussle has 31 tattoos all over his body, all these logos have deep meanings.

Many people have never heard of Dr. Sebi, a Honduran herbalist, biologist and self-proclaimed healer, who passed away on August 6, 2016, and the fact that nobody really talks about Dr. Sebi, née Alfredo Darrington Bowman, and his alleged cures for cancer and AIDS, was a wildly surreal concept to rapper Nipsey Hussle. So, he decided to make a documentary on the controversial healer. The documentary, which followed the 1985 court trial in which Dr. Sebi proved he had a cure for AIDS, allegedly contained evidence that the government assisted in Dr. Sebi’s death.

On March 31, 2019, Nipsey was shot multiple times outside the clothing store he opened in Crenshaw. The shooting was reported around 3:20 p.m. local time in the parking lot at Marathon Clothing on West Slauson Avenue in South Los Angeles’ Hyde Park.

Then the musician was rushed to a hospital, where he was pronounced dead. The Los Angeles County coroner’s office said that he died of a gunshot wound to the head. Fans paid tribute to Nipsey outside the store, claiming «The God Has Died, Jesus Has Died.»

Police suspected 29-year-old Eric Holder of committing the crime. On April 2, 2019, Holder was apprehended by members of the Los Angeles Police Department.

Having heard the news of his death, many celebrities offered their condolences on social media. Los Angeles Mayor Eric Garcetti also offered his condolences to Nipsey's family. A petition was started to rename the intersection of Slauson Avenue and Crenshaw Boulevard near Hussle's store Marathon Clothing to «Nipsey Hussle Square.» On the day of his funeral, the council announced it was set to be renamed Ermias «Nipsey Hussle» Asghedom Square to honor him and his contributions to the neighborhood.

Hussle’s memorial service was held on April 11 at the Staples Center in Los Angeles, with tickets given away free of charge.

The 25.5-mile (41.0 km) funeral procession wound through the streets of South L.A. including Watts where he spent some of his formative years. The Watts Towers were a gathering place along the route for mourners. The crowds lining the streets, which at times created gridlock as they flooded the streets, demonstrated the impact he had on this community.

Hussle's longtime friend and collaborator YG dedicated his performance at the 2019 Coachella Valley Music and Arts Festival to the memory of Nipsey Hussle.

At the time of his death, Nipsey Hussle’s net worth was about $8 million.