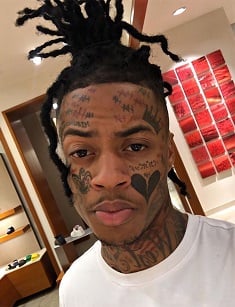 Boonk Gang’s real name is John Robert Hill Jr. He is the native of Jacksonville, Florida. He was born there in 1996. Nowadays he is a rapper, but got wide fame thanks to social media activity. Boonk Gang posted in Instagram and Facebook online videos of his teenager’s hooliganism. Then he started filming rap videos and writing music.

His top songs are “Makes No Sense”, “Facts”, “Ventin”, and “Muttin”. Also, he is the owner of the online clothing store. Boonk Gang had some problems with drugs and was arrested several times. His net worth is about $200,000.

The birthplace of John is a small town, Jacksonville, which is the part of the state of Florida. His mother’s name is Simona Ariel. John appeared on August 3, 1996, and soon his parents divorced. Simona brought John up without his native father. Little John knew his father’s name and location but has never had any relationships with him. Simona was rather a good mother, comparing to other poor families, but also had some problems. Although she didn’t take drugs, sometimes she suffered from bouts of rage, threatening to kill herself or even her children.

Their family didn’t have a permanent home. They often moved and didn’t stay in one place for a long time. That’s why, as a kid, he stayed with different people. There were days when he was at his distant aunt’s home. Sometimes he spent time with unknown mother’s friends or even people, whom he had never seen before. John remembered those days for a lifetime. That’s why some years later he made a tattoo of word “vagabond” on his face. According to Boonk, he did it to pay respect to those days.

Things got worse, and it became difficult for John to survive. The boy was completely alone and started stealing food and clothes. It was a necessity, but not his desire. He was hungry and didn’t have something to wear. Sometimes the police caught him and brought home. His mother was rather tired of his antics. Just at that moment, she started to call him Boonk. At those days it was an urban word for stealing or nabbing something or someone. John didn’t like that nickname.

He started stealing more than he needed and the number of arrests increased. John’s mother could not stand it out and kicked him out of the house. Then he was 17 years old. He lived on the streets and numerous thefts were the only way to survive. In the same time Simona decided to move to Miami. John lost the hope to return home and started to steal expensive items of technique in high-profile stores. Then he sold it at school. Half of the money he spent that to buy drugs for resale. It helped him to earn about $10,000.

In 2014 his girlfriend got pregnant. John started working at Popeye’s Chicken restaurant. All free time he spent on Facebook and made short comedy sketches. Each of his videos collected about 2,000 views. His girlfriend didn’t support his hobby. Unfortunately, later she suffered a miscarriage. There is very few information about that period of John’s life, the only known is that he deleted all his videos on Facebook and went to Miami, where he found his mother. Simona met John with good intentions and allowed to live with her in Miami. Social media developed rapidly, and John decided to try to earn thanks to it. He registered on Instagram. His username was Boonk Gang.

He started to collect the followers by simple following any unknown people. His account had a big success. He started to hold life sessions. His fans asked him to steal something from restaurant and Gang did it. He stole a chicken from Popeye’s Chicken and posted a video of that action. The number of his followers became multiplying, and Boonk Gang continued to video his violations. He stole food, watches, clothes and money. He made pranks at hospital, at church, at restaurant, at shopping center and in almost every location of Florida. Thanks to those crazy videos he became famous in Instagram and won one million followers. His videos regularly got on different lists of the top 10 most viewed Instagram posts.

Eventually, Boonk Gang decided to start a professional music career and to change his image. He deleted all his Instagram posts that people didn’t associate him with crazy stunts, challenges, and pranks. John recorded his first song “Muttin” before he was famous. Then he was 15 years old and was involved in criminality.

However, his musical career can be divided into before and after the appearance of Lil Pump in Boonk’s life. John Hill Jr. signed a contract with his management agency and stopped taking Molly and Xanax. He released a lot of singles. For example, “Makes No Sense”, “Facts” and “Ventin” became ones of the most popular singles of Boonk Gang.

The official video for his song “Muttin” has been viewed more than 2.7 million times on YouTube. Later “On EM” and “Back Den” were released and also had a big success. DeeMoney was the producer of both songs. And in March 2018, the debut mixtape of Boonk Gang was released. It was called “Dat Boonk Gang Shit” and consisted of 12 tracks.

Boonk had a lot of troubles because of his crazy videos. He was even arrested several times. The first case was on May 7, 2017. Gang visited Dunkin' Donuts, located at 18801 NW Second Ave. At first, he yelled expletives. Then he decided to take a tray, filled with donuts and walked out of the store with it. Two months later, Boonk was charged for theft and burglary. Eventually, he got probation.

The new arrest of Boonk happened in September 2017. The rapper Boonk was visiting the shopping center with his friends. The cop arrested him without precedent, according to the witnesses. The video of that incident and a photo of the police report were later posted on his Instagram. After jail Boonk showed in Instagram the new pictures on his face. One of them was the Joker image. He wasn’t vs. Joker, on the contrary, declared himself the real Joker of Florida.

In January 2018 the artist’s security guard was arrested by police in the airport. He was trying to skip the check-in line. After that Boonk was kicked off plane. That’s why he posted a video, where he spoke dirty about the airline company.

In May 2018 John Hill Jr. was arrested again. He was in his house, which located in Calabasas. The police accused Boonk of storing drugs and weapons. However, he was released the same day and paid a $35,000 bail. The rapper reported that he was still off the drugs, especially, off the Xanax, which he has taken earlier. Later he recorded a song about this arrest.

Boonk Gang is of African-American descent. He has 14 siblings. He was born when his father was 21 years old and his mother was only 16 years old. John was very gifted at sports. He has tried his hand in many kinds of it, for instance, football, different athletics, basketball and other ones. The wish to make music became stronger. Boonk has made several tattoos on his face, including the words “misunderstanding” and “vagabond”.

In September 2017 he released his own video game. It was titled “Boonk Gang: The Video Game”. He is the star at the game and the players guide him as he picks up money left behind by passersby while avoiding pursuing cops and "The Man." In 2018 it became known about Boonks’s drug abuse. During his interview, John rose from his seat and was unable to stand up, nearly fell on the floor from being so high off drugs. Later he described in his posts on Twitter the reasons of his abuse.

One of his posts was:

“I do drugs because I feel alone. When I’m high, I feel nothing. When I’m sober, I feel everything”.

Also in 2018 people could see the video, where Danielle Bregoli was kissing Boonk Gang. There is very few information about its authenticity. However, Danielle denied that she took part in the video. Earlier she publicly dissed Boonk.