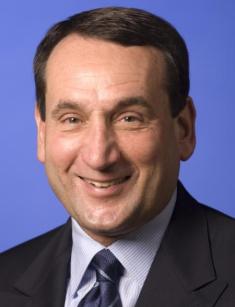 Mike Krzyzewski is a legendary basketball coach famous for his college accomplishments with Duke University. He has also led the American national team to three gold medals in the Olympic Games.

The would-be coach was born in winter 1947 in Chicago. The parents, who were of the Polish ethnicity, migrated to the United States and then had two kids, Mike and his older brother Bill. The family was faithful and instilled the same beliefs in their sons.

Krzyzewski went to Archbishop Weber High School and continued his education at the United States Military Academy. The young man was fond of sports and helped the academy’s basketball team participate in the National Invitation Tournament; he was the captain back then.

In 1974, following six years in the army, Michael began his coaching career as an assistant for the Indiana Hoosiers. The next season, he was named the head coach of the Army Cadets and spent there five years, bringing them to the National Invitation Tournament once.

Krzyzewski’s most glorious moments pertain, of course, to Duke. His all-time record since 1980 is more than impressive. The team not only participated in the NCAA Tournament regularly but also won five of them; Mike led them to 15 ACC Tournament triumphs and became the ACC Coach of the Year five times.

Since 1987, the coach has been working with the national team; Olympic gold medals and other achievements speak for themselves.

Sometimes, the coach gives in to emotions. In 2016, when Duke lost to Oregon, he criticized the rival team’s member Dillon Brooks for showing his happiness with the victory; Krzyzewski apologized later.

The name of the coach’s wife is Carol Marsh. Although Mike had had several relationships before, he fell in love with the young woman as long as he saw her. In 1969, soon after the couple graduated from their colleges, they married. Today, the spouses live in a house in Durham.

Three daughters were born in this union: Debbie, Lindy, and Jamie. Besides, Michael has nine grandchildren, one of which, the grandson Michael Savarino, plays for Duke.

Apart from his direct duties, the coach is interested in other activities. For example, fans can see him in commercials, like the one in a limo in the 1990s. Krzyzewski follows football news and praises the quarterback Dak Prescott’s abilities; by the way, Prescott has been supporting Duke for a long time.

In January 2020, there was another unpleasant incident involving Krzyzewski: he was seen shouting at a Duke student. Later, he explained his excessively emotional state by the recent death of Kobe Bryant and misunderstood chant, where his friend Jeff Capel was presumably mentioned.

Mike Krzyzewski’s net worth is $35 million in 2020; his annual salary is about $9 million.